Turkey’s military commitments to Libya’s Tripoli-based government have escalated the conflict in the eastern Mediterranean. 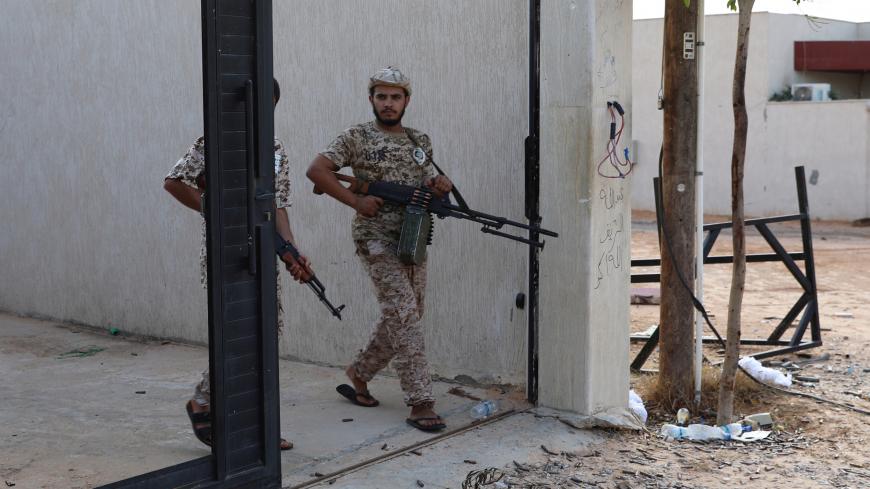 Few Turks — and even fewer non-Turks — are aware of Libya's historical significance for Turkey. Yet recent developments have shifted international attention to the eastern Mediterranean as a new zone of conflict. Specifically, Turkey and Libya's agreement, signed Nov. 27, to determine maritime borders, and President Recep Tayyip Erdogan's statement that he would send Turkish troops to Libya if the Tripoli-based government requested as much.

Libya was once called Ottoman Tripolitania, from 1551 to 1864 under the Ottoman Empire — the empire's last African possession. Italy had designs on the Ottoman province and attempted to invade it. The founder-to-be of the Turkish Republic, Mustafa Kemal, was dispatched by the Committee of Union of Progress to Tripolitania in 1908 on a mission to build support for the "motherland." In 1911, he served as a volunteer in the eastern part of the province, Cyrenaica, to organize the armed resistance against the invading Italians. Libya played a formative role for the leaders and future founders of the Republic of Turkey, which replaced the Ottoman Empire in the 1920s.

Former Prime Minister Ahmet Davutoglu emphasized the geopolitical importance of Libya for Turkey. On more than one occasion, he has said that the distance between Libya and Turkey’s southwestern province of Antalya is shorter than that between Antalya and Istanbul. Davutoglu used to boast that while the colonial Western powers were interested in having a presence in the eastern Mediterranean, Turkey had, via its exclusive ties with Libya, extended its influence to the Western Mediterranean, giving Turkey an international standing on par with France.

Given the historical background between Turkey and Libya, one could possibly see nothing wrong with Ankara and Tripoli's recent agreement. But Turkey's prospective military commitment is escalating the struggle of interests in the eastern Mediterranean.

However, Erdogan’s reaching out to Fayez al-Sarraj, the prime minister of the Government of National Accord (GNA), has nothing to do with his historical memory or his loyalty to geopolitical imperatives. More than anything else, it is dictated by ideological considerations, in particular the power struggle in the Sunni Muslim world.​ Sarraj and his domestic Libyan allies are known to be pro-Muslim Brotherhood Turkophiles, while his nemesis, Khalifa Hifter, who controls more territory and runs the eastern Tobruk-based government, is supported by the United Arab Emirates, Saudi Arabia, Egypt and Jordan. Turkey and Libya's maritime deal mainly covers eastern Libya, where Sarraj has no power.

Turkey’s frequent references to Sarraj as the head of Libya's “internationally recognized government” is partially true. The government was formed under the terms of the Libyan Political Agreement, which was signed in December 2015 as a result of a UN-led initiative. The UN Security Council unanimously endorsed the Libyan Political Agreement and recognized the GNA as Libya's sole legitimate executive authority.

Yet the permanent members of the Security Council lean toward supporting Khalifa Hifter’s Tobruk-based government. France is fully committed to Hifter, and Russia is warming up to him. Hifter speaks fluent Russian and studied at Soviet military schools. The United States is not indifferent to Hifter. He has US citizenship and developed close ties with the CIA, as his family resides in Virginia, near Washington DC.

The Tripoli-Ankara maritime and security deals escalated the already volatile situation in Libya, as Hifter's forces unleashed a new onslaught against Tripoli, declaring the deals illegitimate.

The bond between Turkey and Libya or, in other words, Erdogan and Sarraj, rests on a fragile link. If a military confrontation is to decide the fate of Sarraj and Libya, then the moment Hifter's forces enter Tripoli and depose the GNA, Erdogan and Sarraj's alliance will collapse, along with the deals.

As in Syria, Russia has emerged as a major power in Libya with a decisive role in shaping the eastern Mediterranean. Russia is one of the few powers that could contain Erdogan's desire to escalate the situation in Libya into a multisided conflict.

“Turkey’s readiness to send troops to Libya at the request of an internationally recognized government led by Fayez al-Sarraj worried the Gulf countries supporting the opposite side," Subotin wrote. "According to Qatari interlocutors, much of the response of the Arabian capitals will depend on the results of negotiations expected between the presidents of the Russian Federation and Turkey in January.”

Russian presidential spokesman Dmitry Peskov reiterated that Vladimir Putin and Erdogan would take up the Libya issue in a meeting the first week of the new year. "Of course, during the upcoming contacts, both over telephone and face to face, the topic of Libya will most likely be discussed," he said. "You know that Russia and Turkey carry out very tight, virtually daily contacts on Syrian affairs that also require a joint conversation on Libyan affairs.”

A couple of hours after Peskov’s statement, the Kremlin announced that Putin and Erdogan had talked on the phone Dec. 17, leading to speculations that the two leaders may get together before Putin’s scheduled visit to Turkey Jan. 8, 2020.

Russian experts are already talking about Russia's potential role in Libya. Kirill Semenov, an expert at the Russian International Affairs Council, wrote that the security cooperation agreement signed by Erdogan and Sarraj was "particularly worrying to Russia."

He quoted Foreign Ministry spokeswoman Maria Zakharova as saying that the agreement "gave rise to allegations of Turkey’s attempts to legalize its military support for the government in Tripoli in its confrontation with the Libyan national army of Hifter, including through an open violation of the arms embargo."

Semenov continued: "Moscow fears that the document could disrupt the international conference on the Libyan settlement in Berlin, scheduled for the end of the year. Although Moscow is trying to maintain relations with all parties to the Libyan conflict, it remains interested in having [Hifter] and his supporters become the leading players in post-war Libya, albeit with a certain balance of political forces. Hifter is perceived in Moscow as a leader who, unlike Sarraj, is able to establish a secular regime in the country and put an end to Islamic groups. Moreover, the Russian side is impressed by Hifter’s emphasis on his continuity with the [Moammar Gadhafi] regime, as well as the fact that he promises to provide Russia with military bases in Libya.”

Despite Ankara and Moscow's opposing positions on Libya, Semenov believes Russia can use Libya to extract what it wants from Turkey in Idlib, Syria.

“Most likely, the Libyan card will be added to the common Russian-Turkish deck and played out as part of a deal to delimit the positions of the parties in Idlib province and northeast Syria," he wrote. "For example, in exchange for a greater consideration of Turkey’s interests in Libya and a decrease in support for Hifter, Moscow could enlist the help of Ankara in transferring certain parts of Idlib to the control of the Bashar al-Assad regime.”

Erdogan has threatened to shut down the Incirlik air base and the Kurecik radar station, where the United States and NATO conduct operations. Yet this should not be seen in the context of deteriorating relations following the US Senate resolution recognizing the Armenian genocide of 1915. Instead, it is a veiled message to Russia. It is an open secret that Incirlik, for the United States, is replaceable. The base has more of a symbolic value, reflecting the state of affairs between the United States and Turkey. Erdogan's mention of Kurecik was intended for Putin's satisfaction.

Turkey is dear to Russia for its “Trojan Horse function in NATO,” as I referred to in an earlier Al-Monitor piece. Thus, in the context of diverging Turkish and Russian directions in Libya, it's important to regard Erdogan's salvo on the NATO facilities as a message directed toward Russia rather than a tangible threat or a display of displeasure toward the United States.

The first quarter of 2020, if not the first month, is the period to watch how Erdogan's Libya gambit will play out. One thing is certain: Russia will emerge as a power broker in the eastern Mediterranean, too.