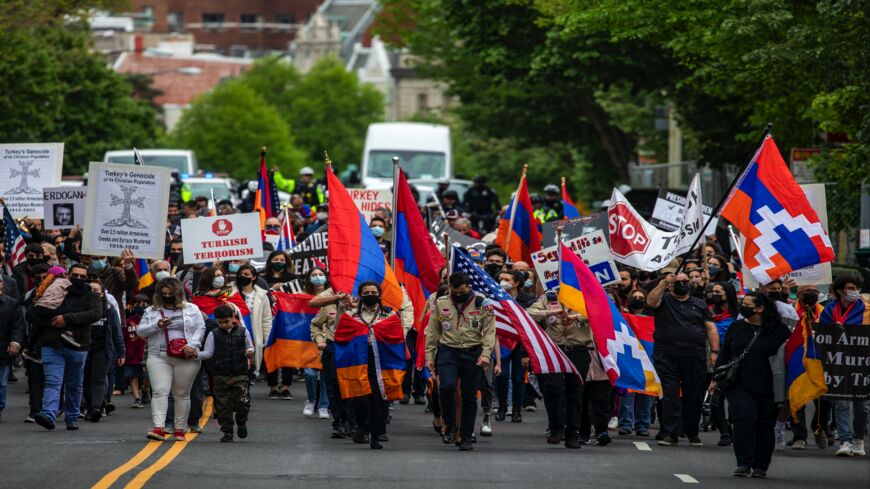 Supporters of Armenia stand off with Turkish supporters outside the Turkish Embassy on April 24, 2021, in Washington, DC. President Joe Biden became the first US president to formally refer to atrocities committed against Armenians as a “genocide” on Saturday, 106 years after the 1915 start of an eight-year-long campaign of ethnic cleansing. - Tasos Katopodis/Getty Images

It is no secret that since the day of Joe Biden’s inauguration on Jan. 20, Turkey’s President Recep Tayyip Erdogan was nervously waiting to be called by the President of the United States. That call would be interpreted as affirmation that relations between the two countries would go on as business as usual.

Numerous government trolls and media under strict control of Erdogan were waiting for the call to use the occasion to gratify Erdogan and humiliate his domestic critics.

On the other end of the Turkish political spectrum, the long wait had become a source of mockery.

And on April 23, the call finally came. But it did not come in a way that Erdogan wished or his trolls could manipulate.

Biden called his Turkish counterpart mainly to inform him of the historic statement he would make the following day, that he would pronounce the “G word” for the 1915 events in which the Ottoman Armenian people in Asia Minor perished.

There should have been no surprise element in what Biden informed Erdogan. Leading US dailies like The New York Times and The Wall Street Journal reported that Biden would recognize the 1915 atrocities as the Armenian genocide a day before the call. “The action would signal that the [US]  commitment to human rights outweighs the risk further fraying the US alliance with Turkey,” The New York Times had written.

In the previous 40 years, almost all US presidents, including Barack Obama, had made campaign promises to recognize the G word, only to backtrack when they were elected. Every year on April 24, the anniversary of the 1915 Armenian genocide, they issued watered-down statements. Obama, for instance, consistently avoided the term genocide, using instead "Meds Yeghern," an Armenian expression that means "great crime” or “great catastrophe”.

Biden used both terms — Armenian genocide and Meds Yeghern — in a carefully crafted statement that avoided accusing the Republic of Turkey of the genocide, emphasizing that the events took place under the Ottoman Empire.

“Beginning on April 24, 1915, with the arrest of Armenian intellectuals and community leaders in Constantinople by Ottoman authorities, one and a half million Armenians were deported, massacred or marched to their deaths in a campaign of extermination,” he said.

Unlike his predecessors, Biden displayed consistency with his campaign promises and catapulted himself to moral high ground in prioritizing human rights and universal human values. This presidential campaign promise for foreign policy also transformed the US strategic outlook vis-a-vis Turkey.

A week before the official US recognition of the Armenian genocide, Biden announced a full withdrawal from Afghanistan, which was widely interpreted as the end of US over-extension in the Middle East, including Turkey. That, intrinsically, means that Turkey lost the geostrategic significance it had for the United States.

The Pentagon was the lead US agency blocking recognition of the Armenian genocide over the years, citing Turkish-US defense cooperation. The backbone of the US-Turkish alliance had been on the security and military fields, which played a pivotal role in US presidents’ watering-down of their statements every April 24.

Not anymore. A day before Biden’s statement, the United States removed Turkey from the F-35 program officially, signaling the termination of perhaps the most ambitious and strategic military project between the two allies.

That is a not-totally unexpected outcome after Turkey acquired S-400 Russian missile defense systems. The US side warned Ankara numerous times to withdraw from the deal. The Turkish president did not step back and seemed to be self-confident in his talent of leveraging — in other words, of playing big powers against each other with impunity.

The recognition also illustrated to the whole world that Turkey and the United States are only nominal allies. The nature of their alliance transformed into a transactional relationship, just like the one the European Union is having with Turkey without calling it so openly.

The brief statement by the Turkish presidency following the phone conversation between Biden and Erdogan said, “Two leaders agreed on the importance of working together to enhance the cooperation on the basis of relations of mutual interest and the strategic nature of the bilateral relations.”

“The two leaders agreed on meeting on the sidelines of the NATO leaders’ summit in June,” it said.

Erdogan, who knew that Biden would pronounce the G word — a long-time red line for Turkey — committed himself to "working together" and "agreed on meeting" with Biden in June.

Indeed, the current situation indicates that the United States needs Turkey much less than Turkey needs the United States. The Turkish decision-makers made themselves, the Turkish public, and their US counterparts believe the opposite for a long period.

The timing of Biden's decision underscored Turkey's weakness as well. It came at a time when the economic crisis in Turkey is aggravating, and Turkey has no choice but to attract foreign investors, including those from the United States. Turkey's relations with the European Union are not good enough to leverage against Washington. Interestingly, relations with Russia are also fragile because of the Black Sea geopolitics, where Turkey seemingly stood with Ukraine.

Turkey is in no position to threaten to cut relations with Washington and leave the Western security system, and Ankara cannot impose any sanctions on the United States.

Biden, in turn, faces only a little political price for recognizing the Armenian genocide, and apparently, he is aware of this fact.

Turkey, in its present situation, does not have many effective means or cards to play against Biden. The worst of all is Washington's awareness of this fact. Such awareness facilitated Biden to make the decision. The US move regarding the G word may end as the success of a foreign policy based on principles without totally forfeiting the imperatives of realpolitik.