The survey by the Israeli human rights group also concluded that most Israelis and Palestinians believe the International Criminal Court's probe into alleged Israeli crimes will not affect policy. 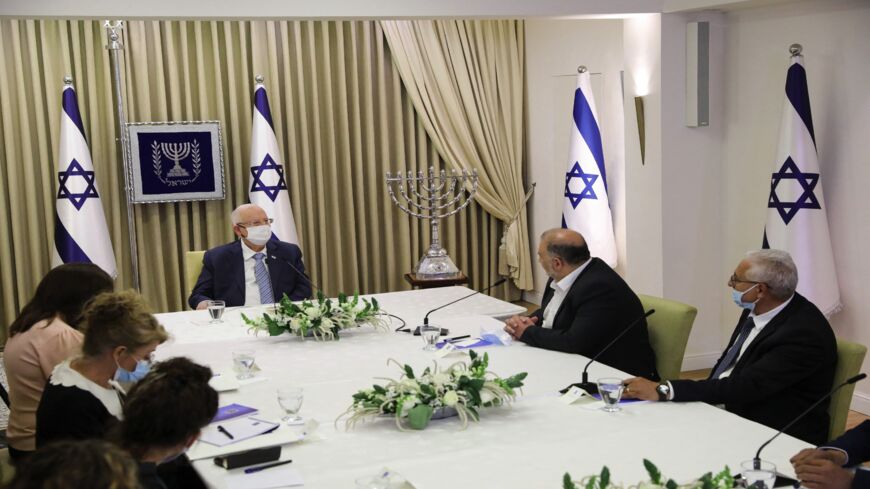 Israeli Arab politician, leader of the United Arab List Mansour Abbas (R) attends consultations with Israeli President Reuven Rivlin (L) on who might form the next coalition government, at the president's residence in Jerusalem, on April 5, 2021. - ABIR SULTAN/POOL/AFP via Getty Images

A survey from an Israeli human rights organization this week revealed Israeli and Palestinian attitudes on West Bank annexation, the International Criminal Court, Arab participation in Israeli politics and more.

B’Tselem released findings from a public opinion survey on Monday. The rights group asked questions to people in both Israel and the Palestinian territories the West Bank and Gaza, they said in a press release.

Opinions on the prospect of Israel annexing the West Bank differ between Israelis and Palestinians. Last year, Israeli Prime Minister Benjamin Netanyahu promised to annex the Palestinian territory by legally incorporating it into Israel. He backed down in August when the United Arab Emirates agreed to normalize ties with Israel. The survey found that 58% of Palestinians believe Israel intends to annex the territory, compared to 32% of Israelis.

B’Tselem also asked respondents about the International Criminal Court’s probe into Israel. The Hague-based court said in March that it would open the probe into alleged Israeli crimes against Palestinians. Most Israelis and Palestinians do not think the court’s actions will compel Israel to change its policies. Exactly 51% of Israelis and 70% of Palestinians said this, according to the survey.

The survey also inquired into attitudes on the status of Palestinians in any future annexation and the possibility of a one-state solution to the conflict. A 68% majority of Israeli Jews oppose giving West Bank and Gaza Palestinians full citizenship, while 18% support it. On the possibility that Israel would annex the territories but not give citizenship to Palestinian residents, 41% of Israeli Jews said they would support this.

B’Tselem found a shift from last year among Israeli Jews on the prospect of an Arab political party joining a coalition government. In 2019, 35% of Israeli Jews said they would support this, but this year’s survey showed 49% would. The jump among right-wing Israeli Jewish voters was 19% to 31% and 50% to 67% among centrists.

These findings follow the success of the Islamist Raam Party in last month’s Israeli election. Party leader Mansour Abbas made history when he said he would potentially join with Zionist political parties in a government in exchange for better services for his Arab voting base.

Finally, B’Tselem’s survey concluded that three-quarters of Palestinians believe Israel to be an apartheid state and three-quarters of Israelis do not. Apartheid refers to the race-based segregation system in South Africa in the 20th century.

B’Tselem is a leading human rights organization in Israel and is highly critical of the Israeli government. B’Tselem itself believes Israel is an apartheid state and accused Israel of being a “regime of Jewish supremacy” in a January report.