A new report by one of Israel's leading human rights groups argues in favor of the analogy to segregated South Africa. 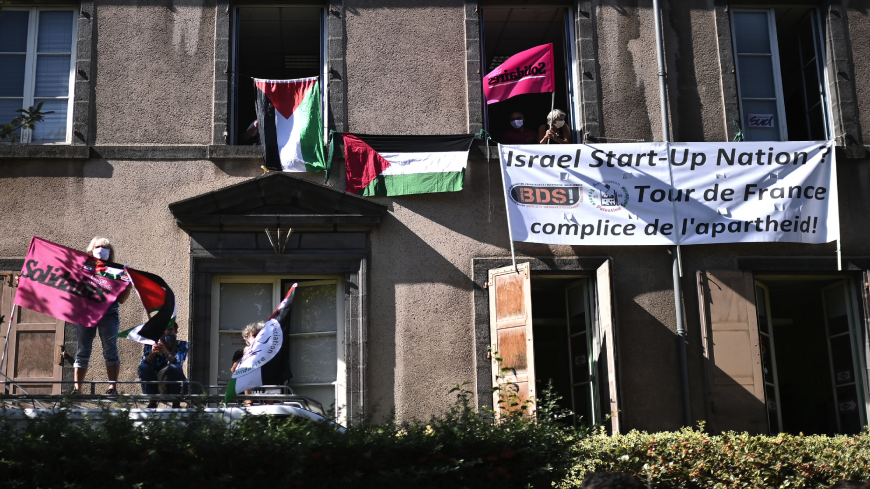 Boycott, Divestment, Sanctions (BDS) movement activists display Palestinian flags and a banner reading "Israel Start-Up Nation, Tour de France is the accomplice of the apartheid" as the pack rides during the 13th stage of the 107th edition of the Tour de France cycling race, 191 kilometers between Chatel-Guyon and Puy Mary, on Sept. 11, 2020. - MARCO BERTORELLO/AFP via Getty Images

One of Israel’s leading human rights organizations has labeled the country an “apartheid state” in an extraordinary step that is bound to draw backlash among conservative segments of Israeli society and from members of the government.

In a report entitled “This is Apartheid,” B’Tselem said Israel has become a “regime of Jewish supremacy” with different rules for the Jewish Israeli and Palestinian populations in the territories under its control.

The analogy to white-ruled South Africa gained traction in the 1990s among dedicated advocates of the Palestinian cause for self-determination. The term has been used to challenge claims that Israel is a democratic state with a separate and temporary military occupation of Palestinian territories.

“Most importantly, the distinction obfuscates the fact that the entire area between the Mediterranean Sea and the Jordan River is organized under a single principle: advancing and cementing the supremacy of one group — Jews — over another — Palestinians,” it read.

Spokesperson of the Israeli Embassy in London Ohad Zemet called the report a "propaganda tool" and said that "Israel rejects the false claim in the so-called report as it is not based on reality but on a distorted ideological view."

The continued expansion of exclusive settlement areas and infrastructure for Israelis, as well as the division of the militarily occupied West Bank into different administrative categories with limits on Palestinians’ movement, has led critics to accuse Israel of creating “Bantustans” and of making Israeli control over the West Bank permanent.

Israel captured Gaza, the West Bank and Syria’s Golan Heights in the 1967 war against its Arab neighbors, and was supposed to work toward allowing an independent Palestinian state following the 1993 Oslo Accord. Critics have pointed out that that goal appears no closer today than it did decades ago.

Though Israeli forces pulled settlers from Gaza in 2005, the strip remains blockaded. A war between Israel and Palestinian liberation groups in Gaza in 2014 left sections of the territory in ruins and severely worsened living conditions.

Meanwhile, successive Israeli governments have continued to expand Jewish settlements in the occupied West Bank while entrenching their military presence there.

Then-outgoing US Secretary of State John Kerry alluded to the obvious discrepancy in a firmly worded speech in late 2016. “Here is a fundamental reality: If the choice is one state, Israel can either be Jewish or democratic. It cannot be both, and it won’t ever really be at peace,” the Obama administration’s top diplomat warned.

The Trump administration has widely been seen as greenlighting the ambitions of Prime Minister Benjamin Netanyahu while offering Palestinians a promise of economic investment and a future state in exchange for allowing Israel to annex large swaths of the West Bank.

That plan has been shelved amid international backlash and as the White House pushes its last-minute Abraham Accords initiative, which seeks to convince Middle Eastern leaders to normalize ties with Israel despite the lack of any realistic prospect for a two-state solution. So far, the United Arab Emirates and Bahrain have formally recognized Israel, which announced a plan for 800 new settlement homes in the West Bank earlier this week.

Public opposition to the status quo Israel has created has grown in the West over the past decade, including in the United States. But apparent supporters of Israel’s policies have pushed back on advocacy for Palestinian rights, chief among them the Boycott, Divestment and Sanctions movement.

The movement calls for economic boycotts of Israeli businesses and goods modeled on those that targeted apartheid South Africa in the 1980s and 1990s. Last year, a number of US lawmakers endorsed proposed legislation that would have allowed the federal government to punish companies that chose not to do business with Israeli companies.

More than 30 US states now have laws designed to discourage economic boycotts of Israel and Israeli businesses.

Members of B’Tselem stopped short of endorsing calls for boycotts or sanctions but said on Tuesday that the international community should “take action” to change Israel’s policies.