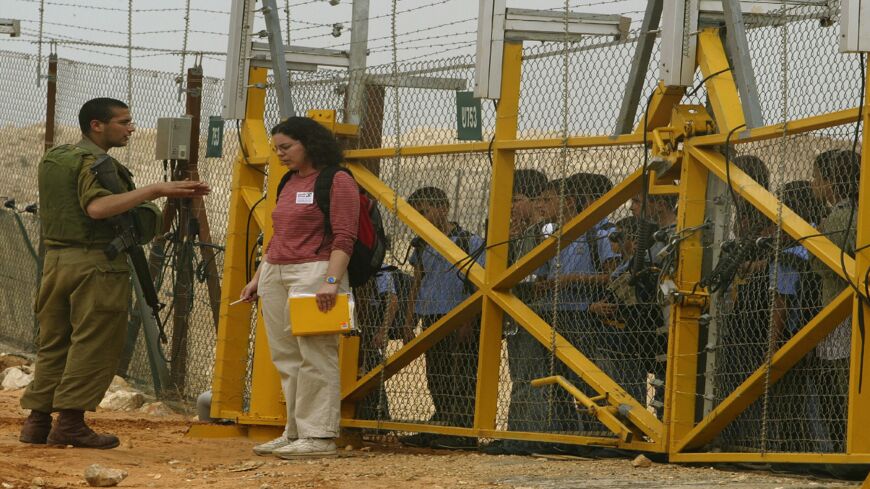 Israeli human rights activist Adi Dagan listens to an Israeli soldier as she waits for troops to allow Palestinian schoolchildren home through a gate in the security fence March 2, 2004, at the village of Jubara near the West Bank town of Tulkarem. The 300 Israeli women volunteers of the Machsom Watch group have appointed themselves to the task of monitoring the Israeli army, which operates about 65 manned and hundreds of unmanned checkpoints in the West Bank. - David Silverman/Getty Images

A leading human rights organization decided Tuesday to refer to Israel’s occupation of the Palestinian territories as "apartheid." The harsh criticism reflects growing criticism of Israeli policies toward Palestinians.

Human Rights Watch said Tuesday that Israel is committing “crimes against humanity of apartheid” in the West Bank, Gaza Strip and East Jerusalem, according to a press release. This is the first time the New York-based organization has used the term to refer to Israeli control of these areas.

Apartheid refers to the race-based segregation system in place in South Africa in the 20th century. The arrangement allowed for preferential treatment of white people versus the Asian, mixed-race and especially black populations.

Human Rights Watch released a lengthy report Tuesday explaining the apartheid conclusion. It argued that the roughly equal number of Jewish Israelis and Palestinians in Israel and the Palestinian territories have differing rights with “limited Palestinian self-rule.” The report detailed policies that allegedly seek to maximize the Jewish population versus the Arab population, restrict Palestinian movement and deny Palestinians residency rights, among other things.

Israel captured the West Bank and East Jerusalem from Jordan and Gaza from Egypt during the 1967 war. Israel then annexed these parts of Jerusalem, which include Jewish, Christian and Muslim holy sites, into Israel proper. The United Nations and much of the international community consider the West Bank and Gaza as occupied Palestinian territory, though Israel disputes this. Several countries, including the United States, now recognize Jerusalem as Israel’s capital. The Palestinian Authority has limited control over parts of the West Bank. Hamas controls Gaza internally, but the territory is subject to an Israeli and Egyptian blockade.

Israel justifies many of the measures mentioned by Human Rights Watch as necessary for its security, as the organization acknowledged. Deadly attacks on Israeli civilians by Palestinians, which were a regular occurrence in the early 2000s, have gone down significantly since the construction of the Israeli West Bank Barrier, according to the Israeli government.

"Wanted: A Human Rights organization that cares more about helping the Palestinians living under Hamas oppression and less about demonizing Israel,” the Israeli Foreign Ministry said in a tweet.

The apartheid analogy for Israel and Palestine has gained steam recently. The Israeli human rights organization B’Tselem began using the term in January. A February University of Maryland study found that 59% of Middle East scholars polled said the situation in the West Bank and Gaza is “akin to apartheid.”