Hamas and other Palestinian groups purposefully targeted population centers during the May war with Israel, according to Human Rights Watch. The organization also accused Israel of war crimes last month. 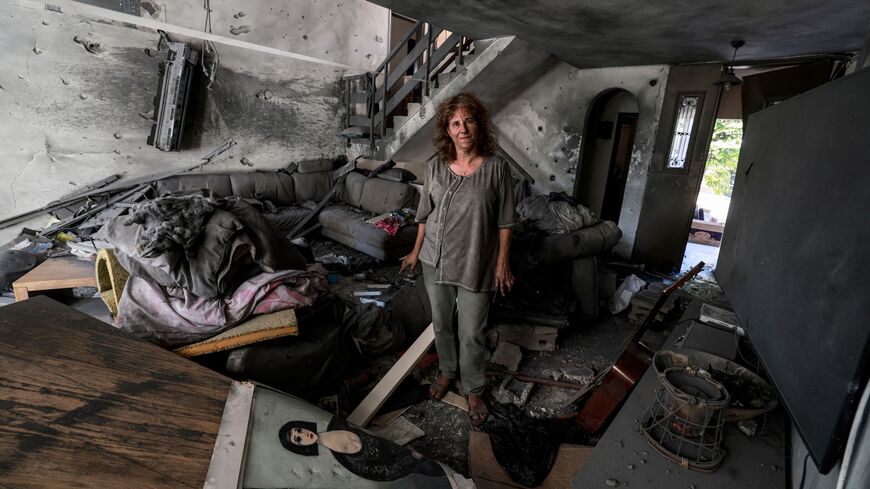 Sigal Harieli stands in her destroyed home in Israel's southern city of Ashkelon on May 25, 2021, five days after it was hit by a Palestinian rocket attack from the Gaza Strip. - MENAHEM KAHANA/AFP via Getty Images)

A leading human rights watchdog Thursday accused Gaza-based groups of war crimes and killing civilians during the May war with Israel.

“Palestinian armed groups during the May fighting flagrantly violated the laws-of-war prohibition on indiscriminate attacks by launching thousands of unguided rockets towards Israeli cities,” said Eric Goldstein of Human Rights Watch on Thursday.

Israel and Palestinian groups in Gaza, including Hamas, fought a war in May. The fighting was caused by tensions in Jerusalem and was accompanied by communal violence between Arabs and Jews in Israel. The Israeli military bombed Gaza and Palestinian groups fired rockets into Israel during the war. In Gaza, 256 people were killed, including an estimated 128 civilians. Twelve civilians died as a result of rocket fire into Israel, and one Israeli soldier was killed in an anti-tank missile attack.

The Palestinian military and political organization Hamas controls the Gaza Strip internally, and the enclave is subject to an Israeli-Egyptian blockade. Other armed groups also operate in Gaza, including the Islamic Jihad.

The New York-based Human Rights Watch accused Hamas and other Gaza groups of purposefully targeting civilians during the war by firing rockets and mortars “toward Israeli population centers.” The rights group added that some Gazans were also killed by munitions that failed to launch properly, including in the population center of Jabaliya. These also constituted war crimes because the laws of war only allow for the targeting of military targets, and the rockets were aimed at Israeli civilian populations, according to the organization. The organization also pointed out that in cases such as the Jabaliya deaths combatants should "avoid firing weapons from within or near densely populated areas and otherwise take necessary precautions to protect civilians under their control from attack."

Human Rights Watch interviewed Israelis and Palestinians who witnessed the rockets or are relatives of victims for the report.

The report followed one in July that accused Israel of likewise committing war crimes in its strikes on Gaza.

In April, Human Rights Watch accused Israel of apartheid for its treatment of Jewish Israelis versus Palestinians in the West Bank and Gaza. Human Rights Watch leader Kenneth Roth’s frequent condemnations of Israel have led to criticism of the organization.