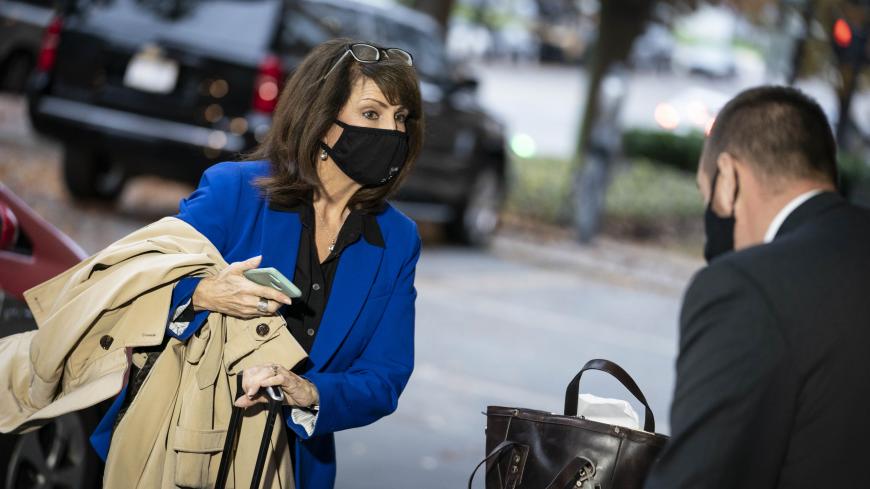 Marie Newman, newly elected to Congress as a Democratic representative from Illinois, arrives at the Hyatt Regency hotel on Capitol Hill on Nov. 12, 2020, in Washington, for orientation. - Sarah Silbiger/Getty Images

A new US Democratic congresswoman is criticizing Israel for its vaccination policy toward Palestinians.

Illinois Rep. Marie Newman said Israeli Prime Minister Benjamin Netanyahu should ensure that everyone in both Israel and the Palestinian territories are vaccinated for COVID-19.

“This virus does not see or care about nationality, borders, or religion — its devastating impact is everywhere,” Newman said on Twitter. “The Netanyahu administration has a moral and humanitarian obligation to ensure that both Israelis & Palestinians have access to vaccines.”

Newman was elected to the House of Representatives on Nov. 3 and took office Sunday. She is a member of the progressive wing of the party that is relatively critical of Israel.

The freshman representative shared an article from the British news outlet The Guardian on Israel’s vaccination policy alongside her comments. Israel is currently giving coronavirus vaccines to Israeli settlers in the West Bank. Palestinians in the West Bank and in Gaza are not receiving the vaccine from Israeli authorities at present.

Israel occupies the West Bank, which has a majority Palestinian population. Hundreds of thousands of Israelis also live in settlements throughout the territory. Parts of the West Bank are administered by Israel, including these settlements. Other areas are under Palestinian Authority administration. The Palestinian group Hamas controls Gaza internally.

Israel is currently leading the world in the number of vaccines per capita given to its residents.

Others have also criticized the fact that Palestinians in the territories have yet to receive vaccines while people living in Israel proper have. Palestinian politician Mustafa Barghouti described this Tuesday as “medical apartheid” to the US left-wing news outlet Democracy Now!

Some Palestinians have received vaccines. Arabic-speaking residents of East Jerusalem, who mostly identify as Palestinian, have begun being vaccinated.

Newman added that the United States should work for rolling out vaccines “equitably” across the world — not only in Israel.

“Whether we're talking about our own communities, the United States, or nations across the globe, we must do everything in our power to ensure vaccines are not only distributed rapidly but also equitably,” she said.