Other countries in the region have only just recently imported vaccines, and the status of vaccination in Iran and Syria in particular is unclear. 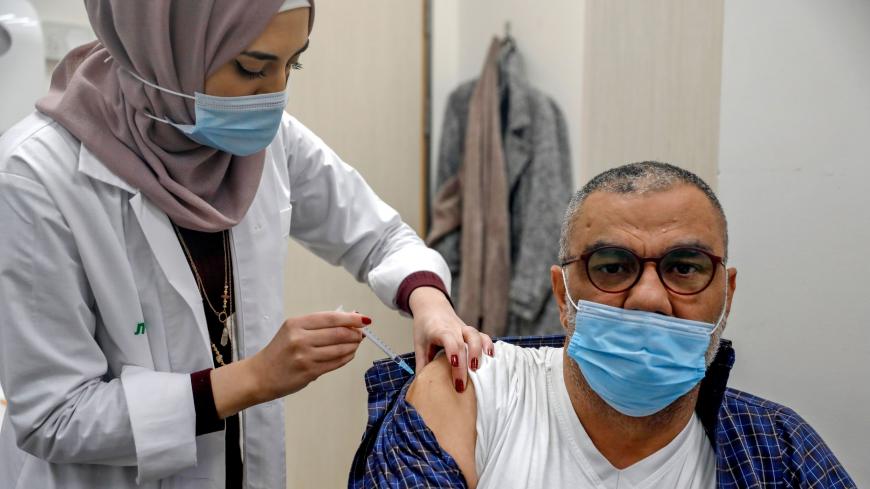 A health care worker administers a COVID-19 vaccine to a Palestinian man at the Clalit Health Services in the Palestinian neighborhood of Beit Hanina, in the Israeli-annexed East Jerusalem, on Jan. 7, 2021. - AHMAD GHARABLI/AFP via Getty Images

Middle Eastern countries have begun the process of vaccinating their citizens against the coronavirus. The rate by which people are receiving the vaccine varies greatly across the region.

Israel leads the region in COVID-19 vaccinations per capita. Around 1.7 million Israelis have received their first vaccine dose. This puts Israel’s vaccination dosage administering rate at a world-high 19.55 out 100 people, according to the Oxford-based Our World in Data science website.

On Thursday, Israeli Prime Minister Benjamin Netanyahu pledged to vaccinate every Israeli over the age of 16 by the end of March.

That Palestinians in the West Bank and Gaza are not being vaccinated by Israel led to criticism of Israeli internationally, including from a US congresswoman.

There are conflicting reports on the Palestinian Authority’s attempts to acquire vaccines. On Wednesday, The Jerusalem Post reported that the authority was in the process of working with Israel and other entities to get vaccines. On Friday, the British news outlet The Independent reported that Israel denied a World Health Organization request to vaccinate Palestinian medics.

UAE health spokeswoman Dr. Farida Al Hosani said the country aims to have vaccinated more than 50% of the population by the end of March.

Other countries in the region have been slower to roll out vaccines and lag far behind Israel, the UAE and Bahrain. Saudi Arabia has administered 0.29 doses per 100 people, according to Our World in Data.

The kingdom could increase its vaccinations quickly in the near future. This week, the Saudi government announced the Sehaty mobile application for vaccinations. Citizens request to be vaccinated and receive a date within 24 hours on the app, the name of which translates to “my health” in Arabic.

The status of vaccines in Iran is unclear. On Friday, Iranian Supreme Leader Ayatollah Ali Khameini said Iran would not import any vaccines produced in the United States, the United Kingdom or France.

His statement appeared to overrule previous decisions. In December, Iran reportedly had agreed to import 150,000 doses of the US-made Pfizer vaccine.

Iran is also working on developing its own vaccine, though this is still in the trial phase.

Other countries are soon receiving vaccines or have only recently acquired them. In Jordan, the Health Ministry said Monday that it would receive vaccine doses in two to three weeks, according to The Jordan Times.

Iraq reportedly agreed with Pfizer in December to import 1.5 million doses of its virus vaccine. On Dec. 29, the Iraqi government announced the process to import the vaccine had been completed. Iraq has yet to report on its progress administering the vaccine.

Turkey received its first batch of vaccines from China’s SinoVac on Dec. 30, the state-run Anadolu Agency reported. The government is reportedly working to import tens of millions more doses.

Qatar began vaccinating people in late December. As of Monday, some Qataris had received both of the necessary doses to complete the Pfizer-BioNTech vaccination, according to the Ministry of Public Health. COVID-19 vaccination requires two doses taken at different times.

Lebanon will receive its first batch of vaccine doses sometime in January, the Lebanese news outlet The Daily Star reported Wednesday. This first batch of the Pfizer-BioNTech will only consist of 60,000 vaccines, according to the outlet.

Syria has yet to acquire any vaccines.