Tunisia is experiencing historic highs in daily COVID-19 cases, though its vaccination rate is among the highest in Africa. 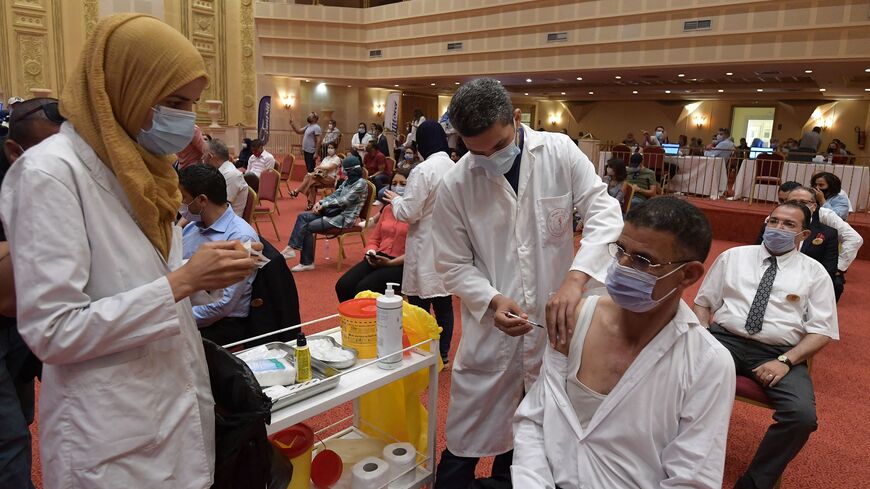 Tunisians working in the tourism industry receive a dose of the Pfizer-BioNTech COVID-19 coronavirus vaccine on June 4, 2021 in Tunis. - FETHI BELAID/AFP via Getty Images

The United Arab Emirates sent a batch of COVID-19 vaccine doses to Tunisia on Tuesday. The North African country is experiencing an outbreak of the coronavirus, though it has had some success in vaccinating its population.

The UAE sent a plane carrying 500,000 vaccine doses to Tunisia. The move was due to the “difficult circumstances Tunisia is facing now as a result of the pandemic” and followed a phone call between Tunisian President Kais Saied and Crown Prince Sheikh Mohammed bin Zayed al-Nahyan, according to the official Emirates News Agency.

Virus cases in Tunisia are at a historic high. Daily infections have gone up dramatically this month and are now around 7,000 confirmed cases a day, according to data from Reuters.

More than 12% of Tunisia’s population of 12 million has received at least one coronavirus vaccine dose. This rate is the second highest on the African continent, according to the Oxford University-based Our World in Data.

Tunisia has used multiple COVID-19 vaccines so far. In March, the country received 93,600 Pfizer-BioNTech doses through the World Health Organization. In April, Russia sent 30,000 doses of its Sputnik V vaccine. Tunisia has also received multiple batches of the AstraZeneca vaccine through the WHO, as well as CoronaVac doses from China.

Emirates News Agency did not report which type of vaccine was sent to Tunisia. There are currently four vaccines being used in the country: Pfizer/BioNTech, AstraZeneca, Sputnik V and SinoPharm. In June, Emirati authorities made Pfizer-BioNTech doses available to people vaccinated with SinoPharm due to concerns about the Chinese vaccine’s effectiveness.

The UAE has one of the highest vaccination rates in the world, with 76% of the population having received at least one dose, according to the Ministry of Health and Prevention.

The Emirates also sent vaccine doses to Yemen in June.