The Israeli prime minister's son responded to Sanders on Twitter, saying Israel is not responsible for vaccinating Palestinians. The spat followed reports Israel is giving surplus vaccines to allies abroad. 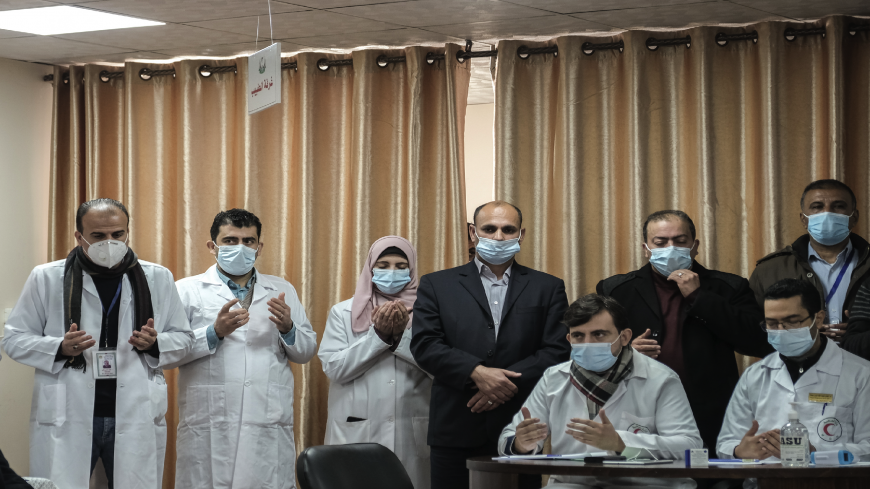 Health care workers and members of the Health Ministry pray during a press conference announcing the arrival of the Sputnik V coronavirus vaccine and the start of the Gaza Strip's vaccination campaign on Feb. 22, 2021, in Gaza City, Gaza. Officials and health workers were among the first to receive the Russian-made Sputnik V vaccine after 22,000 vaccines were donated to the Gaza Strip by Moscow and the UAE. - Fatima Shbair/Getty Images

Sen. Bernie Sanders has joined other members of Congress in criticizing Israel for the vaccination situation in the Palestinian territories.

The Vermont independent said Wednesday that Israel and Prime Minister Benjamin Netanyahu have a responsibility as the “occupying power” to vaccinate Palestinians.

“As the occupying power, Israel is responsible for the health of all the people under its control,” said Sanders on Twitter. “It is outrageous that Netanyahu would use spare vaccines to reward his foreign allies while so many Palestinians in the occupied territories are still waiting.”

Sanders was referring to reports that Israel will give a small number of surplus vaccine doses to friendly countries, including Hungary and Guatemala. Israel is leading the world in per capita vaccine doses administered. However, the Palestinian territories have had a much slower rollout, hence Sanders’ tweet. Reps. Jamaal Bowman of New York and Marie Newman of Illinois have also voiced similar criticisms of Israel in recent weeks.

Human rights groups believe Israel has a responsibility to vaccinate all residents of the Palestinian territories. Israel has not stated it is responsible for this. Netanyahu’s son Yair responded to Sanders’ tweet, saying that Hamas-run Gaza also has a border with Egypt and is therefore not dependent on Israel. He also repeated Israeli assertions that the Oslo Accord gives the Palestinian Authority control over civil issues in the territories.

The United Nations considers the West Bank and Gaza to be Palestinian territory occupied by Israel, but Israel disputes this.

Vaccinations have begun in both the West Bank and Gaza. Israeli and Palestinian Authority plans to vaccinate more Palestinians are continuing, though many details have yet to be worked out.

Adding to the controversy, Israel’s public broadcaster Kan reported Wednesday that the Palestinian Authority refused Israel’s request to open a vaccination center for Palestinians on the Temple Mount in Jerusalem. The authority did not want to allow Israel access to the contentious holy site, according to the outlet.