The situation on the Israel-Gaza border is escalating with a barrage of rockets and mortar shells from Gaza and Israeli strikes on Hamas military positions. 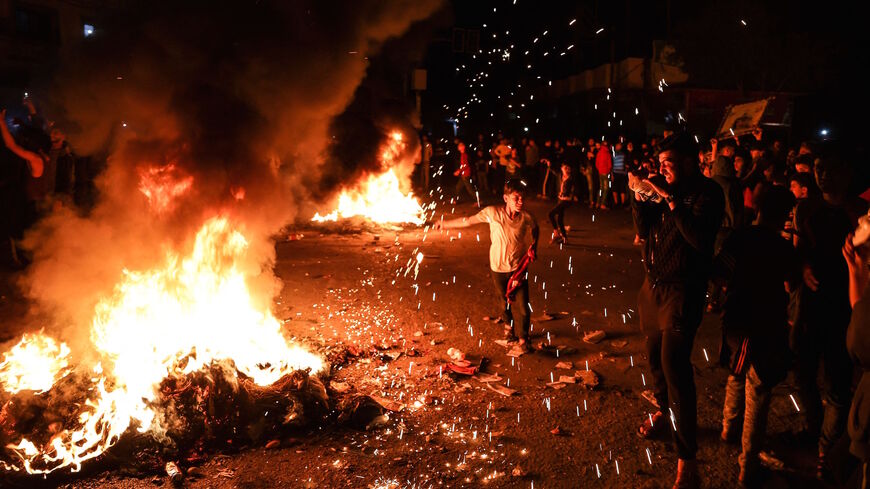 A Palestinian boy plays with a homemade sparkler as tires burn during a rally in support of demonstrators in Jerusalem on April 24, 2021, in Gaza City. - MAHMUD HAMS/AFP via Getty Images

The rocket attacks are widely seen as connected to the clashes in Jerusalem that erupted after police set up iron barricades near Bab al-Amoud (Damascus Gate) in the city.

The clashes that broke out in Jerusalem in mid-April between Palestinians and Israeli police and extremist right-wing Jewish groups have led to one of the most violent rounds of escalation between Gaza and Israel in months after cross-border attacks had subsided.

In an April 24 press release, UN special coordinator for the Middle East peace process Tor Wennesland said, “I am alarmed by the recent escalations in Jerusalem and around Gaza.” He called for ceasing the “provocative acts across Jerusalem” and urged an immediate cessation of “the indiscriminate launching of rockets towards Israeli population centers.”

Hazem Qassem, spokesperson for Hamas in the Gaza Strip, told Al-Monitor, “Jerusalem is a top priority for all Palestinian people. It is one of their holiest sanctities with its great Islamic religious and Palestinian symbolism. The escalation came as a response by the resistance to provocations.”

On April 26, Israeli police removed the barricades in Jerusalem in a move described by Hamas as a victory for Jerusalemites and Palestinians against the Israeli authorities. Qassem said, “The Israeli police’s removal of the barriers after the revolution of the Jerusalem youth is an example of the Palestinians’ capabilities to confront and impose their will in the face of the occupier.”

But despite the relative calm since the barricades’ removal, Qassem said Gaza's reaction depends on the events in Jerusalem. “We are waging a delicate battle, with great wisdom. We cannot allow Israel to impose its escalation agenda on us, whether in Jerusalem or in Gaza. The Israeli threats to the Gaza Strip are not new and do not frighten us. If escalation is imposed on us, the resistance factions across the entire region will respond.”

Qassem explained that the rockets were a show of support from Gaza to Jerusalemites and the product of a national consensus by all the armed factions in Gaza.

The Joint Chamber of Military Operations for Palestinian Factions issued a statement on April 24 warning, “Harming Jerusalem is a red line.”

Qassem added, “Israel started this round of escalation by provoking Palestinians in the city of Jerusalem. It prevented them from reaching Al-Aqsa Mosque and installed iron barriers.”

According to Qassem, the resistance factions in Gaza received many calls from Arab and other countries trying to calm the situation. However, “Our position was clear that the occupation is the one that started the escalation with its behavior in Jerusalem and any party that wants to achieve calm must initiate de-escalation.”

He noted that the parties to the conflict want to avoid an all-out military conflict. “The resistance factions in Gaza are aware of the seriousness of the economic situation in Gaza and they want to avoid any further deterioration that could result from a new military confrontation,” he added.

However, further escalation remains possible, Sawwaf explained, warning, “Should the situation continue to deteriorate in Jerusalem, the resistance will respond with greater force."

Protests in the Gaza Strip have been ongoing since April 24 despite the ban on gatherings imposed by the Hamas government to limit the spread of the coronavirus. Gazans took to the streets in solidarity with the Palestinians in Jerusalem and burned tires. Some threw grenades at the border.

In response to the rocket attack from Gaza, the Israeli authorities banned Palestinian fishermen from the Gaza coast on April 24.

The ban triggered widespread public anger. In a statement, a copy of which was sent to Al-Monitor, agricultural groups in the Palestinian NGOs Network strongly condemned Israel's decision to close the Gaza fishing zone as an “assault on fishermen and a flagrant violation of their basic rights by denying them access to their livelihoods.”

Palestinian fisherman Khaled al-Habil told Al-Monitor he is very disappointed by the Israeli closure of the fishing zone during the sardine and sole fishing season. Fishermen have been waiting for the season, which runs from the end of April to June, to try to make up for last year's losses.

Habil, who has been fisherman for more than 40 years and, told Al-Monitor, “Israel is depriving us of our only source of livelihood. I and 15 members of my family … depend on fishing to to feed everyone. The closure will send us begging in the streets.”

Fishermen in Gaza are bracing for an escalation if the closure continues, according to Habil. “If the closure decision is not lifted, we will violate it and go fishing again, aware of how dangerous this could be. Israeli authorities threaten to shoot us if the fishing ban is violated.”

Jamal al-Khudari, head of the Popular Committee Against the Siege in the Gaza Strip, told Al-Monitor that the ban is a collective punishment by Israel against civilians protected by international law.