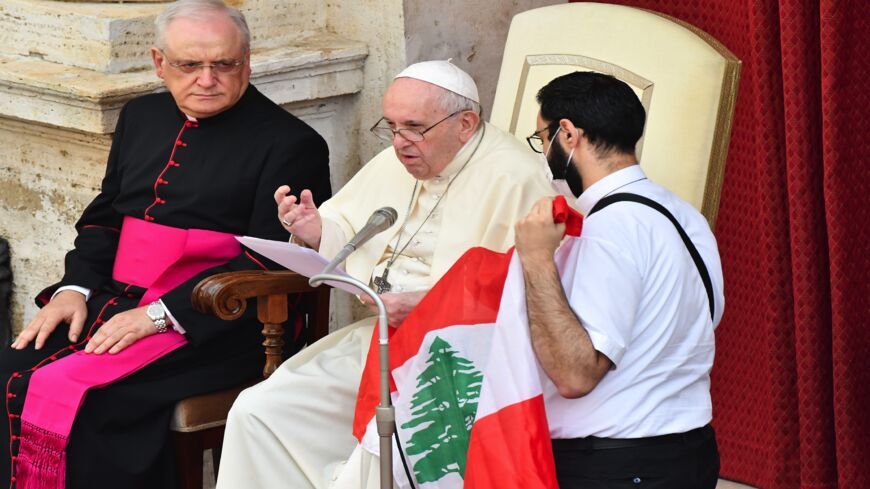 Pope Francis speaks about the situation in Lebanon as a Lebanese priest (R) holds Lebanon's flag and Monsignor Leonardo Sapienza (L) looks on during the pope's limited public audience at the San Damaso courtyard in The Vatican on Sept. 2, 2020. - VINCENZO PINTO/AFP via Getty Images

The head of the Catholic Church may visit Lebanon soon.

Pope Francis met with Lebanese Prime Minister-designate Saad Hariri in Vatican City today. The pope offered his best wishes to Lebanon, describing the economic and political crisis in the country as a “moment of great difficulty and uncertainty.” He also said he hopes to “visit the country as soon as conditions are favorable,” according to a Vatican press release.

A papal visit to Lebanon would be historic due to the country’s large Maronite Catholic population. Lebanon has the largest Christian community in the Middle East with additional populations of Greek Catholics, Orthodox and Armenians, among others.

The news follows Pope Francis’ visit to Iraq in March. The trip included a speech in Erbil in the Kurdistan Region, which has a large population of Chaldean Catholics and other Aramaic-speaking Christians that constitutes one of the oldest Christian communities in the world. He also visited the Ninevah Plains where additional Assyrian and Syriac Christians live.

Lebanon is currently experiencing a worsening economic and political crisis that began in 2019. The value of the Lebanese pound has plummeted, and many people struggle to pay for necessities. The COVID-19 pandemic and the tragic Beirut port explosion last August worsened the situation.

Lebanon has had a caretaker government since the explosion. Hariri, who was previously prime minister from 2016 to 2020, was tapped to again head the government in October. However, he has so far failed to form a Cabinet.

Hariri told reporters today that the pope will only visit Lebanon once a government is formed.

“The pope wants to visit Lebanon but after a government is formed. This is an important message for us to speed the government formation,” he said, according to the Lebanese news outlet naharnet.