Hariri steps down as prime minister-designate after dispute with president

Lebanon has been without a government for nearly a year as the economic crisis in the country worsens. 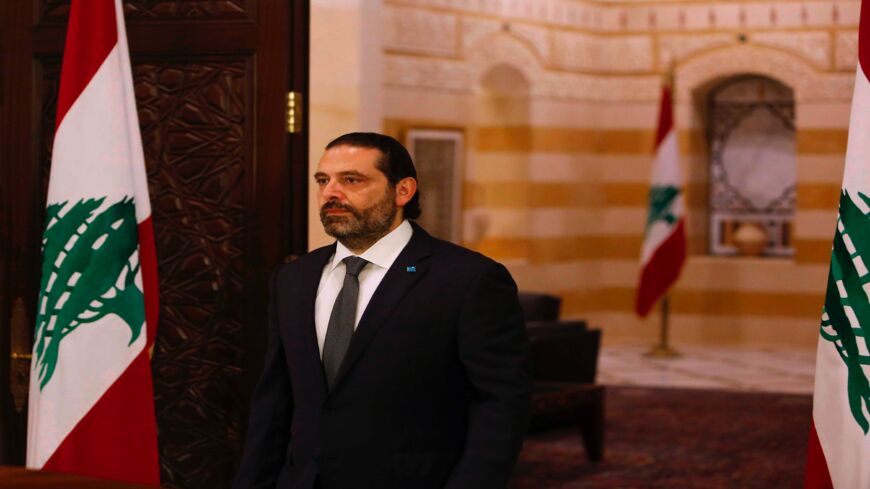 Lebanese Prime Minister Saad Hariri prepares to give an address at the government headquarters in the center of the capital, Beirut, on Oct. 18, 2019. - MARWAN TAHTAH/AFP via Getty Images

Saad Hariri stepped down from his post as Lebanon's prime minister-designate on Thursday, thus plunging the country further into political crisis.

Hariri withdrew his nomination following a meeting with Lebanese President Michel Aoun, according to the official National News Agency. Hariri said the two politicians reached an impasse on the government formation.

“I suggested more time, but the president saw that there was no room for agreement between us, so I apologized for not forming a government,” said Hariri. “May God help the country.”

The Lebanese governmental Cabinet led by Hassan Diab resigned en masse last August following the Beirut port explosion. Hariri, who previously served as prime minister from 2016 to 2020, was tapped to form a new government in October. He was unable to do so, and Diab remains as caretaker prime minister.

Hariri, whose late father, Rafic, was also prime minister, explained his decision to resign in a statement.

“The president requested amendments to the Cabinet lineup proposal; however, the request changes the aspects which I deem essential for the new Cabinet formula,” he said. “We’ve discussed matters related to confidence, and it is clear that nothing has changed. It’s quite evident that the president and I do not see eye to eye.”

Aoun laid the blame on Hariri, however, saying the former prime minister refused any changes to the list of Cabinet ministers he submitted.

“President Aoun stressed the need to abide by previously reached agreements, but Prime Minister Hariri rejected any amendment related to any change of ministries, sectarian distribution, names or any opinion of parliamentary bloc,” said Aoun in a statement released by the National News Agency.

The statement added that Aoun had exhibited “willingness” regarding “the need to speed up the formation of the government which is capable on reform.” It also said this was communicated to foreign governments.

Lebanon is a parliamentarian democracy where the positions of power are divided among the country’s predominant religious groups. Traditionally, the president is Christian, the prime minister is Sunni Muslim and the parliament speaker is Shiite Muslim.

The country is in the throes of a harrowing political and economic crisis that will now get more complicated following Hariri’s decision. The crisis began in 2019 and led to mass anti-government protests. The once stable value of the Lebanese pound has plummeted, while job losses and the prices of necessities have skyrocketed. The Beirut port explosion and the COVID-19 pandemic further exacerbated the situation.

At present, fuel shortages are causing massive lines of cars at gas stations. The government is also issuing ration cards so people can buy necessities.

The Lebanese pound hit a record low of 20,000 to the US dollar ahead of Hariri’s meeting with Aoun. The currency previously traded for many years at around 1,500 pounds to the dollar.

The formation of a government is important for Lebanon’s recovery from the crisis. The United States and France in particular want a new government to implement anti-corruption and governance reforms before delivering more aid. Lebanon was a French colony in the 20th century.

There were some indications Hariri’s efforts to form a government could finally collapse ahead of Thursday’s meeting. On Wednesday, Aoun said in a statement he was conducting a review of the Cabinet list.

Hariri was more foreboding, tweeting on Wednesday, “It has been nine months of trying to form a government and now the moment of truth has come.”

Protests continue in the country against the government’s handling of the crisis. Popular anger is also building due to the lack of progress in the investigation into the port explosion.