French Foreign Minister Jean-Yves Le Drian met with President Michel Aoun, who briefed him on the stalled efforts to form a government. 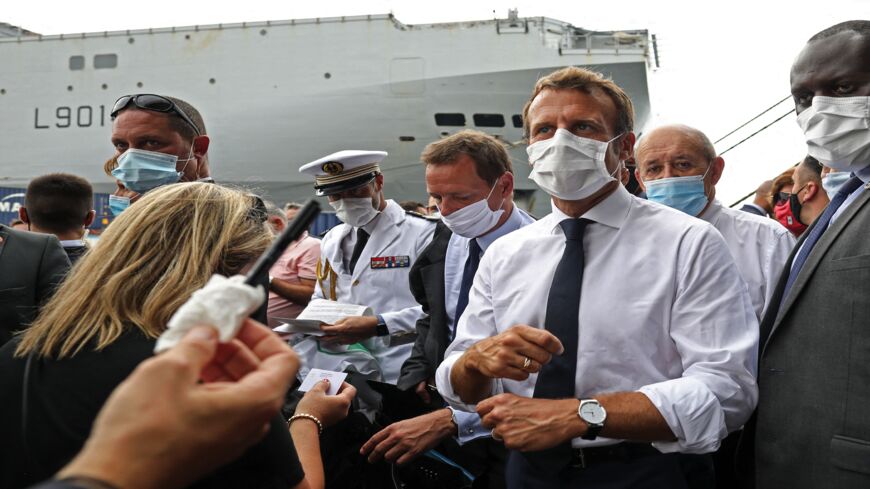 French President Emmanuel Macron (2nd-L) and French Foreign Minister Jean-Yves Le Drian (3rd-L) meet with UN representatives and NGOs mobilized for the reconstruction of Beirut port, on Sept. 1, 2020. Macron pressed his "risky" drive for political change in Lebanon, as the former French mandate marked its centenary while teetering on the brink of the abyss. - STEPHANE LEMOUTON/POOL/AFP via Getty Images

French Foreign Minister Jean-Yves Le Drian visited Beirut on Thursday for talks focused on assembling a new Lebanese government that can save the former French colony from financial meltdown.

Ahead of his visit, Le Drian wrote on Twitter that he would send a “message of great firmness” to those blocking the formation of the government, reminding them of France’s solidarity with the Lebanese people.

"Firmness in the face of those hindering the formation of a government: we have taken national action, and this is just the start," Le Drian tweeted Wednesday.

On Thursday, the French diplomat met with Lebanese President Michel Aoun at the presidential palace in Baabda and was briefed on the government formation process.

A statement from the president’s office said Aoun noted his “responsibility to maintain political and sectarian balance” among ministerial positions and “stressed the cost of lost time in completing the government-formation process.”

Lebanon has struggled to form a Cabinet since Prime Minister Hassan Diab’s government quit days after the Beirut port explosion, which killed more than 200 people, injured thousands and caused billions in damage to the Lebanese capital last August.

Just over two months later, former Prime Minister Saad Hariri was named prime minister-designate for the third time. Hariri, who resigned from the top job in October 2019 amid mass protests against Lebanon’s ruling elite, has since been unable to strike a deal on a Cabinet lineup.

In the meantime, the small Mediterranean country has been left without a fully functioning government to pull Lebanon out of its worst economic crisis since the 1975-1990 civil war. Since the Lebanese government defaulted on its debt last year, international lenders have been reluctant to dole out financial aid without a reform-minded government in place.

French President Emmanuel Macron has traveled to the former French colony several times since the Beirut Port blast and has pushed Lebanon’s leaders to install a government of technocrats that can carry out urgent anti-corruption reforms. Last week, Paris announced travel restrictions on unnamed Lebanese officials suspected of corruption or contributing to the political logjam.