Lebanon has been without a Cabinet since last year, and France does not want to provide the country much-needed aid until economic reforms are implemented. 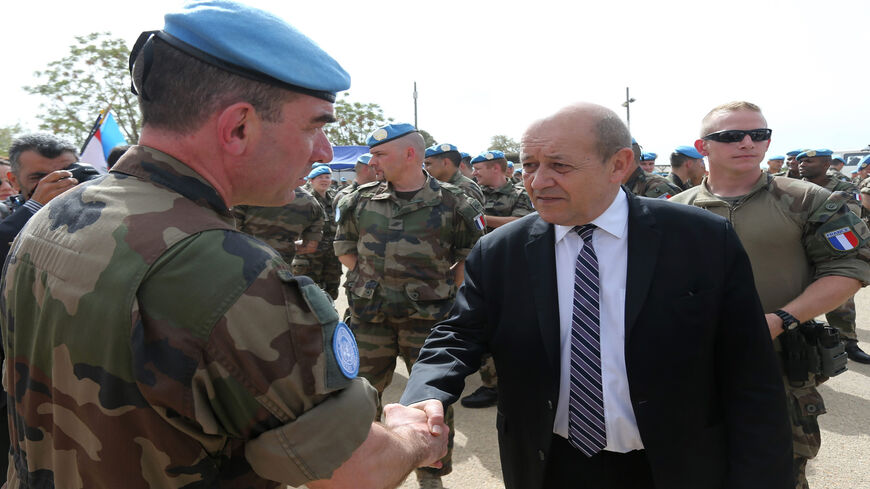 French Defense Minister Jean-Yves Le Drian shakes hands with a French soldier of the United Nations Interim Forces in Lebanon during a visit to the contingent headquarters in the southern village of Deir Kifa, Lebanon, April 20, 2015. - Joseph Eid/AFP via Getty Images

The French foreign minister said today that France has blocked some Lebanese politicians from entering the European country due to alleged corruption. His comments follow continued political deadlock in Lebanon.

“At the national level, we’ve started implementing restrictive measures as regards to access to French territory against figures involved in the current political deadlock or involved in corruption,” Jean-Yves Le Drian said at a press conference in Malta, according to a French Foreign Ministry press release.

Lebanon has been without a Cabinet since August of last year when Prime Minister Hassan Diab’s Cabinet resigned en masse following the Beirut port explosion. Politicians have failed to form a new government since then, and Diab remains as caretaker prime minister. Veteran politician Saad Hariri was named prime minister-designate in October, but he has yet to build a new coalition. Lebanon is also in the midst of a devastating economic crisis.

France has led international calls for a new Lebanese government that will make widespread economic reforms in the country. Lebanon was promised an $11 billion aid package in Paris in 2018 if it could implement structural reforms, but these never happened. French President Emmanuel Macron visited Beirut in August in the aftermath of the explosion. France is supportive of Hariri’s efforts to form a new Cabinet, but remains adamant that there will be no aid without reform.

Lebanon was a French colony in the 20th century and the two countries maintain close relations today.

Drian was critical of the Lebanese political class in his remarks.

"You know the serious deterioration in the economic, social and humanitarian situation and the fact that the political leaders continue to hinder the formation of a competent government able to reform the country,” he said.

Drian added that France and other European states could pursue additional measures against some Lebanese officials who are “obstructing a way out of the crisis.”