The French president said he would meet with Lebanon's political elite to propose a series of reforms that would ensure aid does not go to waste. 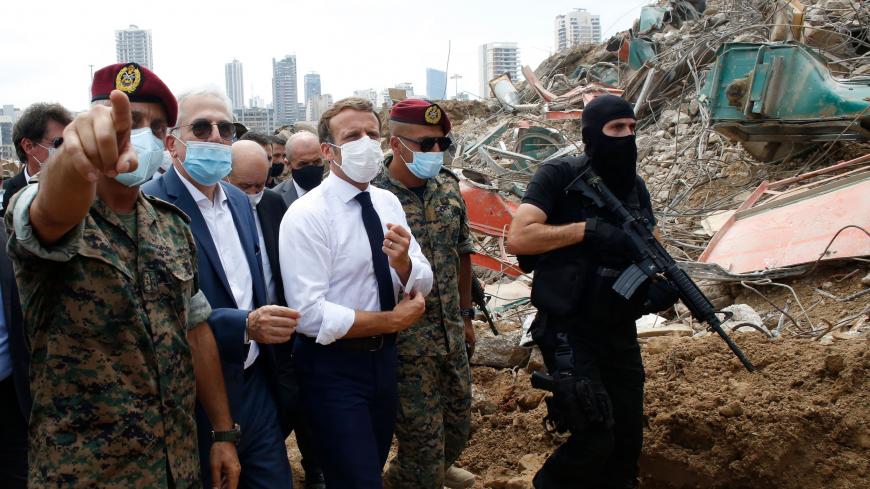 French President Emmanuel Macron (C), surrounded by Lebanese servicemen, visits the devastated site of the explosion at the port of Beirut, on Aug. 6, 2020 two days after a massive explosion devastated the Lebanese capital in a disaster that has sparked grief and fury. - THIBAULT CAMUS/POOL/AFP via Getty Images

French President Emmanuel Macron pledged his country’s support during a tour of the damage in Beirut, stressing that French aid would not fall into “corrupt hands.”

"Beyond the blast, we know the crisis here is serious, it involves the historic responsibility of leaders in place," Macron told reporters Thursday.

"We can't do without telling each other some home truths," he added. "If reforms are not carried out, Lebanon will continue to sink."

Lebanon was in the midst of an unprecedented economic crisis well before the Beirut blast or even the coronavirus pandemic. Unemployment hovered around 25% and a collapsing currency had left nearly a third of the population living below the poverty line.

The accidental explosion is seen as emblematic of the government’s chronic mismanagement. Despite repeated warnings, authorities improperly stored a stockpile of ammonium nitrate at Lebanon’s most vital port for six years. The highly explosive chemical ignited Tuesday, setting off an explosion that killed at least 157 people and injured more than 5,000 others.

Macron told the crowds swarming around him Thursday that he would ensure a “new political pact” for the former French colony.

"I will propose a new political pact in Lebanon, and I will be back in September, and if they can't do it, I'll take my political responsibility," he said.

The International Monetary Fund and donor governments have demanded Beirut undertake painful reforms before receiving any of the bailout money needed to claw out of its $90 billion in public debt.

Macron’s visit to the rubble — the first of any foreign leader — comes on the heels of French Foreign Minister Jean-Yves Le Drian's trip to the small Mediterranean country last month during which he derided Lebanon’s political elite for their “passive” approach to the economic crisis.