The rationale was that Israel refused to allow residents of East Jerusalem to participate. 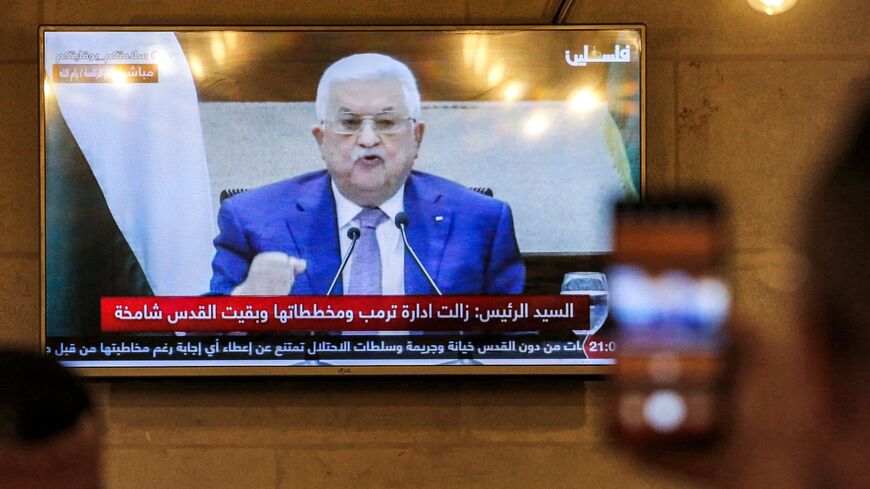 A man uses his phone to film a televised speech by Palestinian President Mahmoud Abbas regarding planned Palestinian elections at a coffee shop in the city of Hebron in the occupied West Bank on April 29, 2021. Abbas said he was postponing the vote. - HAZEM BADER/AFP via Getty Images

While he appears to have received the support of the majority of an unelected group of Palestinians that are referred to as the leadership, it seems 86-year-old Palestinian President Mahmoud Abbas has unilaterally decided to postpone elections. Abbas said the night of April 29 that the vote was postponed because of Israel’s refusal to allow residents of East Jerusalem to participate, but most of those who were running for the May 22 legislative elections he had called for in a January set of presidential decrees want to have elections.

While Abbas blamed Israel and the international community for the postponement, this decision will be a black mark on his legacy.

Abbas gave an emotional televised speech at the start of a closed meeting of the top Palestinian leadership explaining why he is adamant about not having elections if Jerusalemites are not allowed to participate. As a consolation to opponents, Abbas said he will establish a national unity government where all Palestinian factions are represented until the Jerusalem issue is resolved. “If the Israelis say yes, we will have the elections tomorrow,” Abbas said. Palestinian TV reported that a vast majority of the leaders voted in favor of postponing the elections. However, hard-line Hamas leader Mahmoud Zahar called the national unity government idea a “naive" suggestion.

Hamas and heads of the leading lists were not officially invited. After the speech, demonstrations were held in support of Abbas' Jerusalem position while there were other protests opposed to that position, calling for the need for change through the ballot box.

The Palestinian president said the latest response from the Israelis, which came by way of the Americans and Arabs, was non-committal. He scoffed at the reasoning, namely that there is no government in Israel. “Why is there a government when they decide on settlements or to support extremists that call for the death of Arabs?” he asked sarcastically, saying, “We don’t buy that excuse.” Hatem Abdel Qader, a Jerusalem member of the Fatah Revolutionary Council, said the decision to postpone elections is difficult but courageous. “President Abbas refused to trade off the Arab identity of Jerusalem and remove it from the Palestinian body in return to have legislative elections,” he told the Gaza-based news site DoniaWattan.

But the vast majority of those heading the 36 lists that were about to begin their election campaigning opposed Abbas’ argument, saying that if Jerusalem is the issue, fight for it and don’t let the Israelis have a veto on elections.

Tallal Abu Thairfeh, a member of the politburo of the Democratic Front for the Liberation of Palestine, insisted on elections. “We will adhere to elections as a means for change and to rebuilding Palestinian institutions and we will not compromise on this democratic right,” Abu Thairfeh said.

Mustafa Barghouti, head of the Mubadara movement, said, “We should not give the occupiers a veto to stop the election process.”

Hamadeh Hamdeh, who runs a Gaza nongovernmental organization that supports released prisoners, told Al-Monitor that Abbas should have insisted on extracting results rather than giving in to the Israelis. “He should have said, 'We decide who will participate and will not ask your permission.' It is a shame that the supposed Palestinian independent decisions are subservient to Israelis' approval.”

Hazem Kawasmi, a Jerusalem resident who is active in democratic awareness and conflict resolution, told Al-Monitor that what has happened has been a blow to democracy. “Tonight was a bad night for issues of accountability, separation of powers, freedom of expression and the peaceful exchange of power. We have a lot to learn about democracy and human rights," he said.

Hani Khalil, head of the political committee of the Democratic Front for the Liberation of Palestine in Gaza, said some officials are looking for excuses and “have found the Jerusalem issue as a convenient one to use in order to postpone the elections."

Nabil Amro, a Fatah leader, said, “He who doesn’t want elections can easily find an excuse to ensure that it doesn’t happen.”

Ihab Ghusein, who was a candidate on the Hamas list, opposed Abbas' decision. “Using emotional language will not fly with our people anymore,” he said in reference to Abbas’ speech.

Osama Al-Fara of the Mostaqbal list supported by Mohammed Dahlan said what the Palestinian leadership has done is a big setback to all the efforts everyone has worked so hard for.

The postponement of the elections actually appears to be a cancellation. Without a new date and with the elections being hinged on Israeli agreement to allow residents of East Jerusalem to vote, holding a vote seems very difficult if not impossible. Not only will this decision mark Abbas’ legacy but it has dealt a big blow to the ruling Fatah movement despite attempts to hold a few demonstrations in an effort to show the president has popular support. With Hamas and many others active movements opposed to the decision, Abbas and Fatah might have preserved the status quo for now but in the long run they have caused a deep wound in the Palestinian liberation movement and in the trust people might have in their own leadership.