Is Jerusalem a real obstacle or a convenient excuse?

The Palestinian elections expected sometime in 2020 are still in doubt because of lack of clarity about the participation of Jerusalemites, but is this a real reason or an excuse? 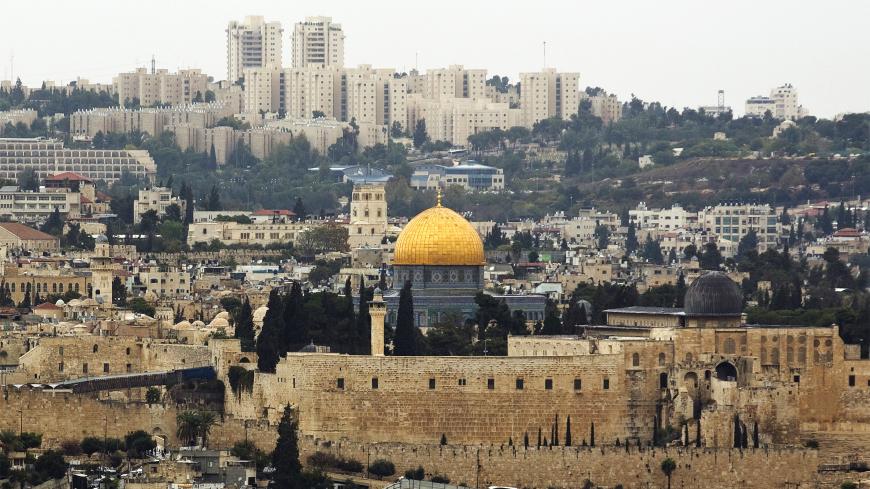 A general view of Jerusalem's Old City shows the Dome of the Rock in the compound known to Muslims as the Noble Sanctuary and to Jews as the Temple Mount, Oct. 25, 2015. - REUTERS/Amir Cohen

Although more than a week has passed since the Palestinian government officially requested Israeli permission to have East Jerusalemites participate in the expected Palestinian elections, the Israelis have yet to respond, leaving the issue of the elections in doubt.

The Oslo Accord has allowed for Palestinians to vote absentee using Jerusalem-based post office centers. Anis F. Kassim, editor of the Palestine Yearbook of International Law, told Al-Monitor that the Israeli hesitation in supporting the rights of East Jerusalem residents to participate in the upcoming Palestinian elections is very telling. “Jerusalem is internationally sanctioned as an occupied territory and Israel acknowledged under the Oslo Accords that Jerusalem is subject to negotiations, which by implication means that it isn’t settled as Israeli territory.”

Palestinian general elections that have included the participation of Jerusalemites have taken place in 1996, 2005 and 2006. Municipal elections for the West Bank only, without Gaza or East Jerusalem, took place in 2012 and 2017.

Arguments are flowing in all directions as to whether the ruling Fatah party or even Hamas really wants elections or not and whether an Israeli obstacle regarding Jerusalem will become a convenient excuse to continue delaying elections.

A Jerusalem figure closely aligned with the ruling Fatah party told Al-Monitor on condition of anonymity that holding elections at the present time will hurt the ruling Fatah party, saying, “If elections take place, it will be a huge disaster for Fatah because they are simply not ready for it and there is public discontent with Fatah.”

Hani al-Masri, director of the Masart think tank in Ramallah, told Al-Monitor that Palestinian President Mahmoud Abbas will issue a decree calling for elections and setting a date for the vote. “My information is that if the Palestinian leadership feels that the elections will not bode well for them, they will use the Jerusalem issue as an excuse not to hold the elections.”

However, Hazim H. Kawasmi, an activist who is considering participating as an independent candidate in the elections, said Jerusalem should not be an obstacle. “The decision to hold general elections in Gaza and the West Bank, including Jerusalem, was a correct decision and therefore we should not allow this issue to delay any more the right of people to choose their leaders. We should use every way possible, including using international pressure, to overcome this problem by pressing Israel not to put down obstacles,” he told Al-Monitor.

A senior Palestinian political figure who asked not to be named told Al-Monitor that a two-tier approach must be applied. “Outwardly to Israel and the world we need to continue pressing for the participation of Jerusalemites; later we should be willing to reach some possible accommodations so as not to allow the issue of Jerusalem to blow up the right of Palestinians throughout the occupied territories to practice their right to vote for their leaders.”

Mohammad Rajoub, a senior political reporter for Amwaj Radio in Ramallah, told Al-Monitor that the delay by Israel in responding to Abbas' Dec. 10 request might be a positive sign. “The fact is the Israeli government has not immediately said no, even though this issue is a highly sensitive one in Israel.”

Writing in the leading Palestinian daily Al-Quds on Dec. 15, former Minister for Jerusalem Affairs Ziad Abu Zayyad called for creative solutions to the issue on the Jerusalem vote issue so as not to let it delay elections. “We can have people vote in the neighborhoods outside of Jerusalem or even vote electronically. But we should not allow Israel to dictate to us how we should proceed,” Abu Zayyad wrote.

The current atmosphere in Palestine is reminiscent of the last parliamentary elections in 2006 when the pro-Hamas Change and Reform list headed by Ismael Haniyeh — now head of the Hamas politburo — took place. US officials and Palestinians have been blamed for underestimating Hamas’ power back in 2006.

Regardless of who would win, elections are a right for people to choose their leaders. Thirteen years is way too long a time to wait. The issue of Jerusalem is certainly very important politically and every effort should be made to include Palestinians of Jerusalem in the elections as they have in the past under the Oslo Accord. But the issue of Jerusalem should not be used as an excuse for any more delays in the exercise of Palestinians’ right to vote for their leaders.