Some Palestinians are gearing up for elections, yet the chance of them taking place in the near future is slim. 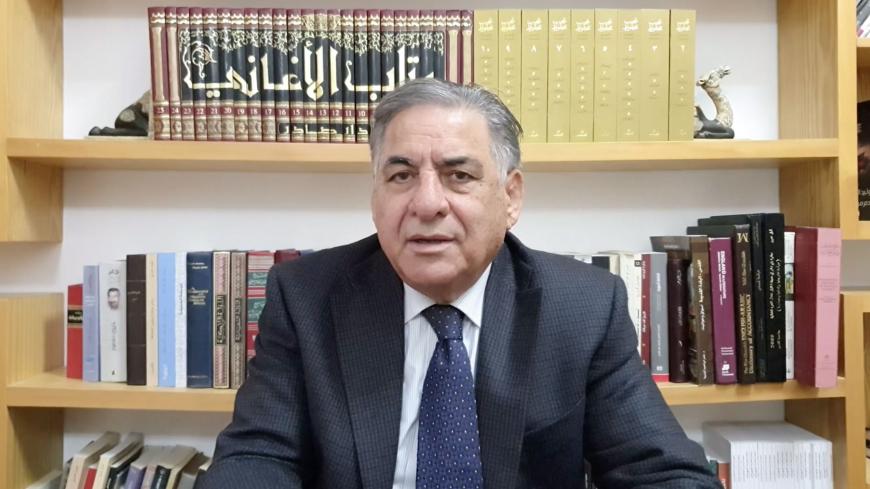 Nabil Amr, former Palestinian minister of information and ambassador to the USSR and Egypt, seen in a still from a video uploaded around Nov. 20, 2019. - Facebook/Nabil.M.Amr

Nabil Amr hopes elections will take place in Palestine in 2020. The former Palestinian minister of information has started his own election campaign on social media. Amr opened his campaign on Facebook with a discussion of US attempts to legitimize Israeli settlements. Dressed in a dark suit with a blue tie, with his bookshelves as a backdrop, the clean-shaven Amr spoke with the confidence and ease of a radio announcer, as he once was. He told his audience that he would be making regular short appearances to introduce himself to Palestinians and to discuss many important topics.

Amr's Nov. 20 video garnered nearly 8,000 views, 81 comments, 30 shares and 529 emojis. Three days later, Amr, also a former ambassador to the USSR and Egypt, was back on social media talking about Israeli Prime Minister Benjamin Netanyahu. He swapped his dark suit for a light blue sports jacket, minus the tie, but with the same bookshelf backdrop. This Nov. 23 video received a little more than 6,000 views, 30 comments, 23 shares and 342 emojis.

Seven days later, Amr was back at it. The tie was back, but paired with the light blue jacket. He kicked off the video stating that he would not talk about elections until a presidential decree was issued with a clear election date and a clear reference for the format of the elections. This Nov. 30 video, which dealt with the rights of Palestinians to protest, received over 5,000 views, 28 comments, 11 shares and 268 positive emojis.

Independent activist Hazim K. Kawasmi shares the enthusiasm and optimism of Palestinians like Amr. Kawasmi is also considering participating in the elections, if they take place.

Kawasmi is from Jerusalem and the chair of the Ramallah-based Freedom Forum Palestine. Kawasmi told Al-Monitor that ever since President Mahmoud Abbas called for elections in a speech at the United Nations last September, he has encouraged friends to deal with this call in a serious way.

“We need to grab this opportunity and run with it,” he said. “All Palestinians should press for having regular and timely elections and not allow excuses to justify any delay, because there will always be some reason for not having elections.”

Kawasmi said he learned in recent years that “even under occupation we should try as much as possible to hold elections to choose our representatives and leaders.”

If elections are held, Kawasmi, who has supported leftist movements in the past, said he would not run under any party’s banner. “I have not decided yet, but if I decide to run, I will run as an independent,” he said.

Kawasmi believes that the leading lists in any election would be independent. “Some independent lists will be closely aligned with the main parties," he said, "but I would like to be part of a genuinely independent list, if we can produce such a list.”

Yet Hani al-Masri, executive director of the Ramallah-based Masarat think tank, told Al-Monitor that elections are nowhere close to taking place. “People like Nabil Amr and others might be enthusiastic about elections, but they are far removed from decision-makers,” Masri said.

Masri said the coming days will show whether “the white smoke of a presidential decree announcing elections will be produced or not.”

Former Palestinian Minister of Labor Ghassan Khatib, who is now a lecturer of philosophy and cultural studies at Birzeit University, said, “Fatah has been surprised with the talk of elections and they are not ready for it. This is one of the three reasons why I am not convinced it will take place. The second reason is Gaza, the division there, and the fact that Hamas is also not ready for elections. While the third reason is the issue of the participation of Jerusalemites in these elections and the reaction of Israel to such participation.”

Major obstacles could derail any possible elections. While the international community, and especially the major donors to Palestinians, i.e., the Europeans, are pushing for elections, a lot of work is still needed to ensure that free and fair elections take place in the coming year. The enthusiasm of some signals the possibility that the current talk of elections is more serious than in the past. Yet this alone will not ensure that elections are held. What is needed is a strong political will by President Abbas and Hamas chief Ismail Haniyeh to ensure that, after a decade of the same leaders, the Palestinian people can finally choose new leaders and not be stuck with those elected in 2005 and 2006.