Although the Biden administration promised to reverse many of the previous US decisions, Palestinians-US relations are moving forward at a very slow pace. 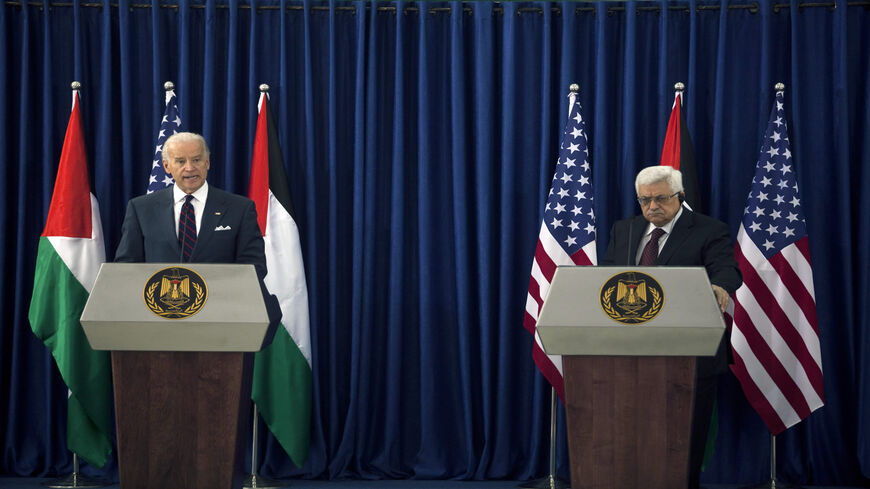 Most Palestinian and international observers would describe the Biden administration, now approaching its third month in office, as being steady, positive but slow with a low priority in addressing the Palestinian issue.

In both his election campaign and after taking office, the 46th president of the United States had promised to renew dialogue with Palestinians and reverse most, but not all, the Trump administration decisions. The restoration of dialogue has run into bureaucratic trouble due to existing anti-terror legislation, so the slow movement has been focused largely on reinitiating financial aid and reversal of semantic description of the conflict and the needed conditions to restart peace talks.

Ahmad Deek, director of the Palestinian foreign minister’s office, told Al-Monitor that the Biden administration is moving in the right direction, noting, “We welcome the steps announced so far including the return of financial support, the reference to the two-state solution and the description of occupied territories.” Deek said that the Palestinians are hoping the White House will “speed up setting up the phone call between President [Joe] Biden and President [Mahmoud] Abbas.”

But James Zogby, a veteran US democratic leader and president of the Arab American Institute, told Al-Monitor some of the early statements made are not promising. “They indicate the same view that has long characterized Washington's approach to the conflict in which Palestinian rights take a back seat to concerns for Israeli security.”

Zogby, who supported the Bernie Sanders campaign, said that the result of the Biden administration’s early efforts is that Israelis continue to act with impunity and Palestinians continue to see a wide range of their rights violated. “Meanwhile, the best the Biden administration can do is offer hollow support for a two-state illusion, as if that absolves them from taking action to hold Israel accountable for their behavior.”

Former Palestinian Prime Minister Salam Fayyad argued that ﻿both during the 2020 campaign and upon taking office, Biden consistently signaled a firm commitment to the goal of restoring norms to US foreign policy. But on the Palestinian-Israeli component, “restoration has been disappointingly slow so far,” he said. Fayyad noted that this is ”especially true given that the Trump administration has left behind a long list of transgressions on norms. Nor, I fear, is the restoration likely to be complete.”

He insists therefore that what is needed is a full reset rather than mere restoration. Fayyad, who is heading a list for the upcoming Palestinian legislative elections, believes that what he calls “the so-called peace process” was dead long before the Trump presidency. “The responsibility for hitting that reset button, however, resides mainly with us Palestinians and that has to begin with the reunification of Palestinian polity, which is squarely a Palestinian responsibility," he said.

Fayyad noted that if we did so America and others “should not get in the way by insisting on Pan-Palestinian compliance with the Quartet principles.” The three principles are aimed at nullifying Palestinian parties that don’t recognize Israel as committed in the Oslo Accord. The Quartet is made up of the United States, European Union, United Nations and Russia.

He has been speaking at and writing for various US think tanks that the principles the Quartet issued 15 years ago and appears to continue to advocate is unacceptable. He added, “The Quartet has no right to predetermine for the Palestinians who their leaders are and what their political position should be,” in order to be "allowed" to assume their position if elected.

Aaron David Miller, senior fellow at the Carnegie Endowment for International Peace, told Al-Monitor that the US administration doesn’t regard the Israeli-Palestinian issue as anywhere near one of its top priorities. Miller explained that Biden’s movements are “modest but steady efforts” aimed at repairing the damage done to US-Palestinian relations during the Trump administration.

“One of Biden’s goals is to repair ties with the Palestinians without alienating the Israelis. Unlike [former President Barack] Obama, Biden isn’t going to press Israel on Iran and Palestinian issues at the same time. The former is much more important than the latter,“ he said.

Fadi Elsalameen, a fellow at the American Security Project, told Al-Monitor that Biden’s level of engagement with the Palestinians and Israelis thus far is making it abundantly clear that solving their generationslong conflict isn’t yet a priority for his administration. “While previous presidents often achieved little despite committing considerable time and resources, Biden has to do something; he needs to meld due to caution with his own new terms and parameters for ending the paralysis here,” he said.

On the Palestinian front, Elsalameen noted, “Without a serious answer to corruption and democratic reforms including elections that reflect unity among the Palestinians, I don’t see an effective way forward for the Biden administration to achieve much success on the political front. Yet some financial support should be provided to the Palestinian people including coronavirus aid and humanitarian assistance.”

While some of the delay might be blamed on the huge domestic priorities facing the Biden administration, a more practical reason might be the absence of a clear government in Israel that had a fourth but indecisive election in March, and the focus of the newly confirmed US State Department team has been on Iran, not Palestine/Israel.