Former Palestinian prime minister plans to participate in the upcoming Palestinian legislative elections. What does his entry into the election campaign mean? 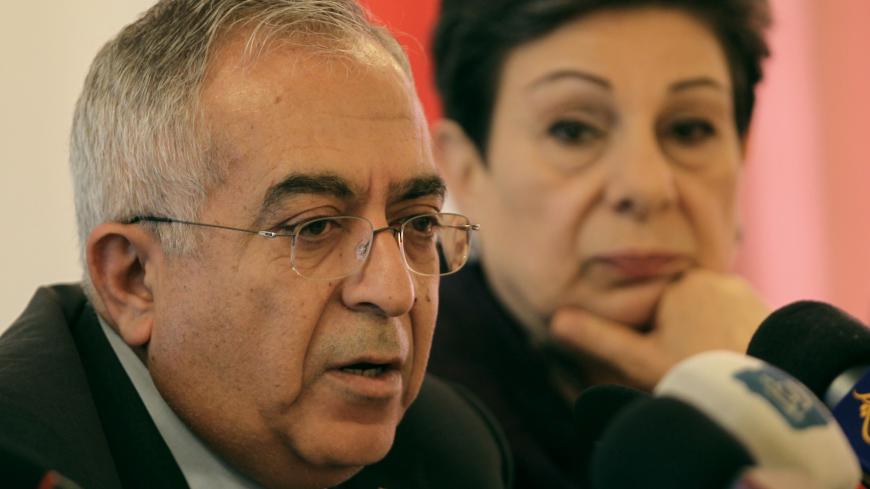 Former Palestinian Prime Minister Salam Fayyad announced March 9 his plans to participate in the upcoming Palestinian Legislative Council elections. In a wide-ranging interview published on the front page of the leading Palestinian daily newspaper Al Quds, Fayyad said he plans to “establish a list of independent individuals to participate in the upcoming legislative elections in an honorable, transparent and competitive way.”

Omar Bseiso, a Gaza-based elections expert, told Al-Monitor that the announcement of the former prime minister is a reminder to Palestinian voters of the right they "have been deprived of for over 15 years.” Bseiso, who worked on Fayyad’s 2006 campaign, said the only problem he has with Fayyad is “his long political and social absence.”

Fayyad, who is now a visiting professor at Princeton University, told Al-Monitor that his absence was forced on him. “After the end of my time in the government I tried to work in civil society and set up an NGO but the prevailing powers barred our organization from work in 2015.”

Ali Jarbawi, a political science lecturer at Bir Zeit University, said the diversity Fayyad would provide is very important, especially after the long drought in elections. “It is unclear after this long period how he and his list will do. It will depend on who is on his list and what other lists are going to be running,” Jarbawi told Al-Monitor.

In his interview, Fayyad said he is absolutely committed to national unity. “What is needed to face the current challenges is a national unity government in which we have all sectors of the Palestinian political landscape and not a majority government. This is a principled and final decision that we will not leave no matter what,” he said.

Jamal Dajani, the former head of communications in the Rami Hamdallah administration, called the move a positive development. “Fayyad has the experience on the local level and is respected internationally,” he told Al-Monitor. “Although many Palestinians would rather see new and young faces and not the recycling of old faces, Fayyad might be able to include them in his new party. More inclusiveness and diversity will only strengthen Palestinians, not weaken them.”

Similarly, Fadi Elsalamen, a Washington-based Palestinian anti-corruption activist, told Al-Monitor that the good news about Fayyad is that he isn’t a corrupt Fatah official and that he isn’t Hamas. “He should be able to capture the votes of those who are not happy with both Fatah and Hamas.”

Elsalameen, a senior fellow at the American Security Project, said Fayyad’s vulnerability is his years as prime minister. “Fayyad is still seen as someone who worked for [Palestinian President Mahmoud] Abbas and executed his economic and security policies. It is good that Fayyad is running, but I don’t expect it to make a big splash.”

Hani Almasri, the director-general of the Masarat think tank, agreed that Fayyad will not receive a large number of votes. Almasri told Al-Monitor that it is unclear whether Fayyad will pass the electoral threshold.

Almasri said the former prime minister had been urged not to run separately but instead join an existing list to improve his chances of winning a seat.

Palestinian pollster Khalil Shikaki said, “Fayyad’s list is not going to make much of a difference to the outcome of the elections. It has a reasonable chance of passing the threshold, but not much beyond that. But if Fayyad is No. 2 on a list created by Marwan Barghouti and led by Nasser al-Kidwa, or part of a larger reform coalition, their chances of taking votes from Fatah would significantly increase. Along with a unified leftist electoral list, such a reform coalition could influence the makeup of the next Palestinian governmental coalition.”

In addition to his support for a unity government, Fayyad is also calling for a much stronger stand for Palestinian rights with the United States and the international community. “We must go back to the beginnings, including to the PLO positions before the 1988 Palestinian peace initiative,” he said in the Al Quds interview. Palestinians must “insist that Israel recognize the legitimate national rights of the Palestinian people, including the right to self-determination.”

“This is a logical request that can be defended internationally, and we can use it to gain the global support of those who support peace, justice and equality,” he said.

Fayyad also dismissed the restraints that the Quartet (the European Union, Russia, the United Nations and the United States) is trying to impose on Palestinian nominees. “We need to insist on our right for equal treatment and we should stop expecting salvation through Washington.”

There is no doubt that the entry of Fayyad into the elections milieu provides an important perspective to voters who are searching for an alternative who has clean hands as opposed to the major factions that have dominated the political scene. But will his participation — following his long absence from day-to-day politics — have an impact on the political landscape?