Who Will Replace Salam Fayyad As Palestinian Prime Minister?

Daoud Kuttab writes that the next Palestinian prime minister will be chosen in light of the reasons for Salam Fayyad’s departure. 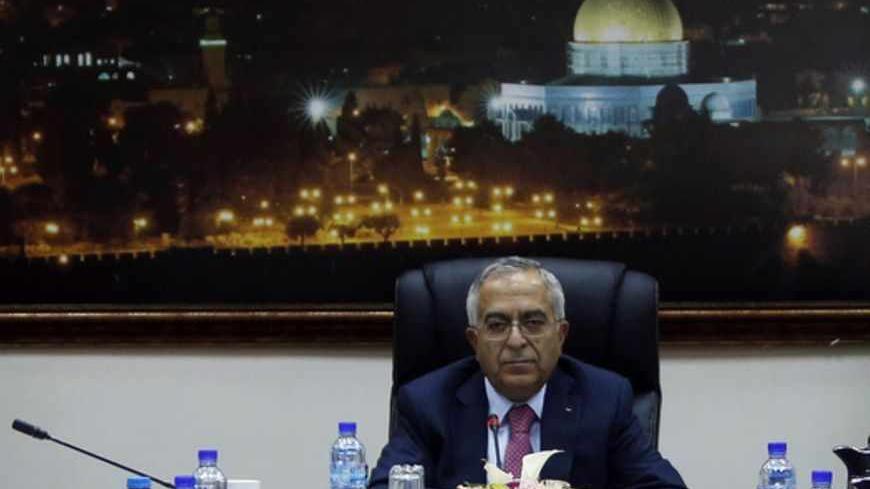 In order to predict who will replace the outgoing Palestinian prime minister, one needs to figure out the real reason for Mahmoud Abbas’ acceptance of his resignation. Did Abbas accept Salam Fayyad’s resignation because of his failure to fundraise, or was it because of internal pressure from Abbas’ Fatah movement? Three possible candidates’ profile can answer this question.

If Salam Fayyad’s departure had to do with over-dependency on Western aid and a desire to seek Arab funding, the next Palestinian prime minister could be someone like Rami Hamdallah, the president of the largest Palestinian university, in Nablus, who has been successful in raising funds for this institution of higher education from Arab sources. His appointment could indicate a shift from Western funding to Arab as the main pillar of keeping the Palestinian government and economy afloat. Hamdallah has good relations with Hamas and was a member of the Central Elections Commission, which just completed a successful registration drive in Gaza. He could be a reconciliation candidate that both Fatah and Hamas would be able to live with. Appointing Hamdallah would be a clear shift by the Palestinian leadership and a distancing from near-total dependency on Western aid.

However, if the issue was more Salam Fayyad’s style than his policies, it is likely that his replacement will have similar political and policy attitudes. In this regard, Western-trained and former IMF official Mohammad Mustafa could be the next prime minister. Dr. Mustafa, the chairman and CEO of the Palestine Investment Fund, is a technocrat with a CV that would address the desires of Western countries. The US, Europe and other Western countries that have been the main source of funding for the Palestinian government would most certainly be able to live with such an appointment. US officials have publicly called for a new prime minister who Washington would be able to work with. US State Department spokesmen have scaled back their earlier indignation at the acceptance of Fayyad’s resignation by saying that US policy is not about a person but about the aspirations of Palestinians. Mustafa could easily fit the profile that Americans and other Europeans have in mind for a Palestinian prime minister while being truly loyal to Palestinian aspirations. The differences between Fayyad and Mustafa are more cosmetic than anything else, but there is no doubt that Mustafa would face a learning curve and that Fatah loyalists hope that he would be more accommodating to their policies than Fayyad.

Finally, if the demise of Fayyad was a result of pressure by the Fatah leadership, then the most probable choice of prime minister would be someone like Mohammad Shtayeh, a member of the Central Committee of Fatah and a member of the Palestinian negotiating team since the Madrid talks. He was also part of the latest Palestinian team holding exploratory talks in Jordan in 2012. A respected minister to many Palestinian governments, his appointment, however, will be seen as a nod to the Fatah leadership, which feels that it has gotten a bad deal in terms of appointments and budgets during the Fayyad era.

While these three represent the most likely trends, there are a number of other possibilities. The Doha Agreement between Fatah and Hamas calls for a national unity government to be headed by Mahmoud Abbas himself. If this happens, it is likely that Abbas will appoint a deputy prime minister (possibly from among the top three candidates) who would handle the day-to-day work of the government. It is also possible that one of the wealthiest Palestinians living in the West Bank, Mounib al-Masri, who has been active in reconciliation meetings as a representative of independent Palestinians, might be asked to take the position of prime minister. Also, Jerusalem businessman and minister to more than one government, Mazen Sunukrot, who has good relations with the Islamists, might be a compromise choice if there is a need to reach out to Hamas during the interim period.

What is common to most of the suggested candidates is a moderate political portfolio, managerial experience and having a clean record in as far as corruption is concerned — as well having a CV that can be acceptable to Western countries.