Outgoing Palestinian Prime Minister Salam Fayyad shows no sign of winding down politically in an interview with Daoud Kuttab. 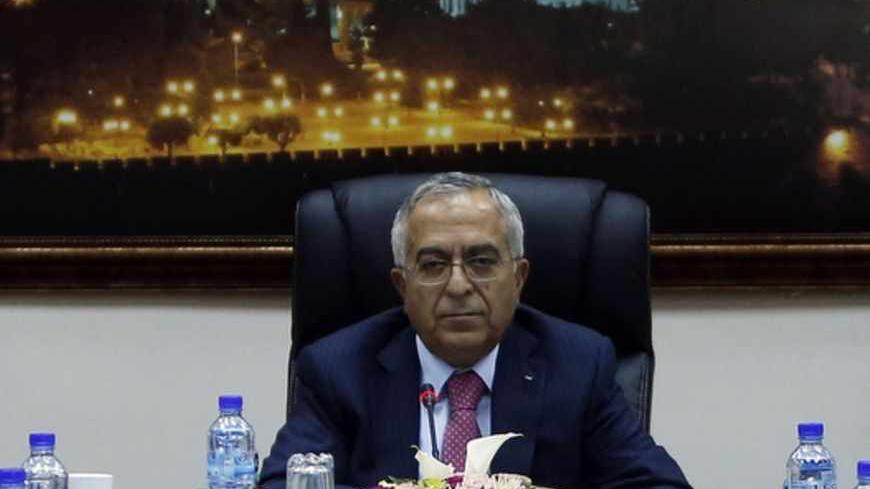 Palestinian Prime Minister Salam Fayyad has called on the Palestinian leadership to stay relevant and engaged. The outgoing prime minister, who is heading a caretaker government, made this plea from his office in Ramallah.

In an exclusive and wide-ranging interview with Al-Monitor, Fayyad explains the reason for his optimistic outlook despite the general pessimism. An unexpected event could trigger a breakthrough, he argues. It could be as simple as the video of Ahmad from Hebron, he said, referring to a YouTube video that has gone viral in which a 15-year-old Palestinian boy innocently asks an Israeli soldier coming to arrest him if he could postpone the arrest one day because he has an important test at school.

The outgoing prime minister shows no sign of winding down politically. He talks with vivid detail about his exchanges with US Secretary of State John Kerry and his one-on-one conversation with President Barack Obama. With both, Fayyad says he stressed the practical, leaving the political discussion to the Palestinian president. Fayyad reflected on the case of Palestinian farmers in the Jordan Valley, reportedly telling his American counterparts to imagine having water pipes run by your land, hearing the flow of water going to nearby Jewish settlement but being unable to access a drop of water for your own land.

Building the infrastructure of the Palestinian state has always been the focus of Fayyad’s term in the Palestinian government. He pushed hard for a Palestinian airport near Jericho and is a firm believer in the need to develop the 65% of the West Bank which Palestinians are barred from accessing because it is under area C.

Fayyad used the Arabic word tabkeet (putting things in cartons), saying he hopes to be able to pack his belongings within weeks and not months, although it is unclear who will replace him. Palestinian president Mahmood Abbas appears to be having a hard time finding an able candidate to replace Fayyad, whether from within his own Fatah or from outside. Fayyad notes that any prime minister must pass what he calls the "Dheisheh test:" For Fayyad, any new Palestinian official must be able to gain the confidence of the clever Palestinian activists like those living in the Bethlehem area refugee camp. The one thing that Fayyad rejects is to stay on very long. Ghassan Khatib, deputy president of Bir Zeit University and former spokesman of the Palestinian Authority, argues that while for Abbas keeping Fayyad around might be the easiest option, the caretaker prime minister will not allow that to happen.

Malcolm Gladwell’s best-selling book The Tipping Point seems to have influenced Fayyad’s thinking. He sees the Palestinian-Israeli conflict as one that can quickly witness a breakthrough, as so many local, regional and international factors are aligned. The tipping point can happen any moment and can be triggered by an unexpected event or incident that captures people’s attention.

Based on his expectation of a tipping point, Fayyad argues that Palestinians must stay vigilant, relevant and engaged. He considers it a mistake to avoid this potential by becoming complacent and pessimistic.

As to his own future, Fayyad is unsure, but it is clear that he has a lot to give to the Palestinian cause. When Al-Monitor met him Monday, he was livid about an erroneous report in a local Palestinian outlet that he plans to return to the International Monetary Fund. He felt that certain political forces are trying to defame him with this leak. "It is as if I am an outsider and that when my term ends, I will return to the outside," he said angrily.

Fayyad plans to spend time reflecting, he says, jokingly noting that he wants to give people a "breather" from him. But despite having no clear plans in the short term, it is clear that Fayyad has plenty of long-term plans in Palestine. He is excited about the connections he has forged with different sectors of Palestinian society, especially those engaged in non-violent resistance. He proudly noted their visits to him that very day and said he plans to stay engaged with them. Another possibility is for him to help the people of Jerusalem as a private Palestinian citizen. Israel had blocked his every attempt as prime minister to engage the people of Jerusalem, which Israel considers to be part of the state of Israel as a result of its unilateral annexation of the city.

For over ten years, Palestinian politics has witnessed a unique politician in Salam Fayyad, who began as minister of finance and has become Palestine's longest-serving prime minister. It is clear to him and his followers that we will be hearing a lot more of Salam Fayyad in the coming months and years, irrespective of his future location.