The resignation of Palestinian Prime Minister Salam Fayyad is unlikely to contribute to Hamas-Fatah reconciliation and the formation of a national unity government, writes Hazem Balousha. 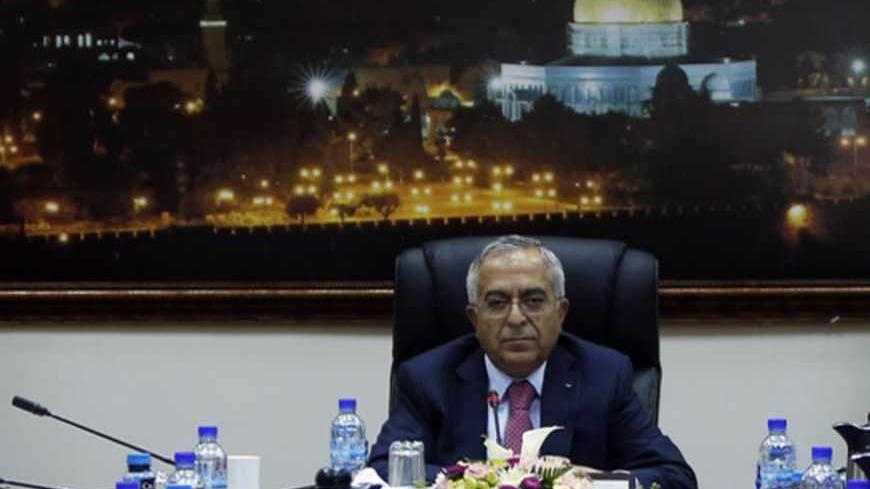 The resignation of the Palestinian prime minister in the West Bank, Salam Fayyad, has sparked mixed reactions among Palestinian factions and the public. While some welcomed this move, others were pessimistic about it. A third camp did not pay it much attention and did not care about its repercussions on the PA’s financial status and on the reconciliation with Hamas.

Although Hamas has not expressed a clear position toward Fayyad’s resignation from the government, which it deems “illegal,” the Islamist group considered that this resignation came within the framework of political conflict between Fatah, headed by Palestinian President Mahmoud Abbas, and Fayyad himself.

Hamas does not consider Fayyad’s government to be its political rival, regardless of the person who represents it. However, it considers any government formed by President Abbas following the split between the West Bank and Gaza Strip to be illegal, since it does not enjoy the confidence of the Palestinian Legislative Council, in which Hamas won the majority.

He added that “Fayyad’s resignation reflects the dispute between him and Fatah, a group that has been insisting on removing him and expressed its happiness about his resignation.” Bardawil also stressed that the problem “does not lie in Fayyad himself, but in the PA’s policies.”

The Hamas official added that “this resignation does not change anything.” What is required is the re-redrafting of the national program by excluding any security coordination with Israel and the rebuilding of national institutions, especially the Palestinian Liberation Organization (PLO). For its part, the Islamic Jihad movement has not shown great interest in Fayyad’s resignation, given the fact that it does not participate in any Palestinian government, whether in the West Bank or Gaza Strip. The jihad movement considers the government as the product of the Oslo Accords signed with Israel, and therefore it refuses to be part of any of them.

Nafez Azzam, a leader in the Islamic Jihad movement, shared the same view with Hamas, as he believes that Fayyad’s resignation is the result of political differences between Fayyad and Abbas, and that his resignation will not bring anything new to the table.

In an interview with Al-Monitor, Azzam said, “There has been a clear disagreement among the PA’s pillars for a long time. It seems now that the dispute has come to its natural end and the separation between them was clearly inevitable.”

He added that what is needed is not to replace Fayyad with a new prime minister but to rearrange the internal Palestinian situation so as to reach a consensus, by rejecting any foreign intervention that could affect the independent unified Palestinian decision.

Regarding the impact of Fayyad’s resignation on the Palestinian internal reconciliation, and the reunification of the two Palestinian governments, Azzam stressed that the problem does not lie in Fayyad as a prime minister, as the “reconciliation does not depend on one person specifically. There are many obstacles that ought to be overcome and problems to be solved in order to achieve unity.”

“Even if Hamas and Fatah agreed on forming a unity government following Fayyad’s resignation, this does not suggest that the division will come to an end. The formation of a government is not the problem. The problem lies in the lack of a clear national program to solve the various Palestinian issues — the PLO case in particular,” added Azzam.

The Democratic Front for the Liberation of Palestine (DFLP), on the other hand, has shown greater interest in Fayyad’s resignation, but considered the internal Palestinian dispute to be greater than the government in Ramallah.

In a press statement, the DFLP said that the economic, social, financial and political Palestinian crisis can only be solved through the formation of a unified and independent Palestinian government headed by Abbas and by holding legislative elections and elections of the National Council, which is affiliated with the PLO. This is not to mention the amendment of the economic and social policy and the promotion of popular resistance against the occupation.

Moreover, there have been mixed views about Fayyad’s resignation on the streets in the Gaza Strip, especially among government employees who receive their salaries from the PA in the West Bank.

According to Fadel Hilal, 46, the announcement of the resignation is a political game by the various political parties in the West Bank. He also regards it a media game as a result of the pressure by the Fatah movement on the Palestinian president.

“The resignation is a fabricated story, as all parties seem to have almost agreed on Fayyad’s resignation and on keeping him in charge of the prime minister’s affairs to no end. I do not believe that Abbas will bring an alternative person to replace him,” said Hilal.

According to Ahmed Lafi, a 43-year-old government employee, Fayyad’s resignation is a great loss to the PA. “Fatah was not able to expand its corruption when Fayyad was at the head of the government,” he said.

“As a citizen and a government employee, I believe that Fayyad was successful financially and administratively. I do not believe that the problem was him personally but the Fatah movement to which I belong, as some of its leaders seek to obtain ministerial positions,” he added.

For his part, Mohammed al-Bantaji, a 35-year-old government employee, launched a scathing attack on Fayyad and his government. “Fayyad came to power as a result of US pressure on the PA, even during the era of the late President Yasser Arafat, when he was appointed finance minister and later on prime minister, after the division. Fayyad was the one who plunged the PA into financial debt,” he said.

Hazem Balousha is a Palestinian journalist based in Gaza City. He has worked as a news producer for BBC World Service, as well as contributed to Deutsche Welle, The Guardian, Al-Raya (Qatar) and other publications. Balousha covered Israel's Operation Cast Lead in Gaza in 2008 and the conflict between Fatah and Hamas in 2007. He is also the founder of the Palestinian Institute for Communication and Development (PICD), and has a master's degree in international relations as well as a BA in journalism. Twitter: @iHaZeMi