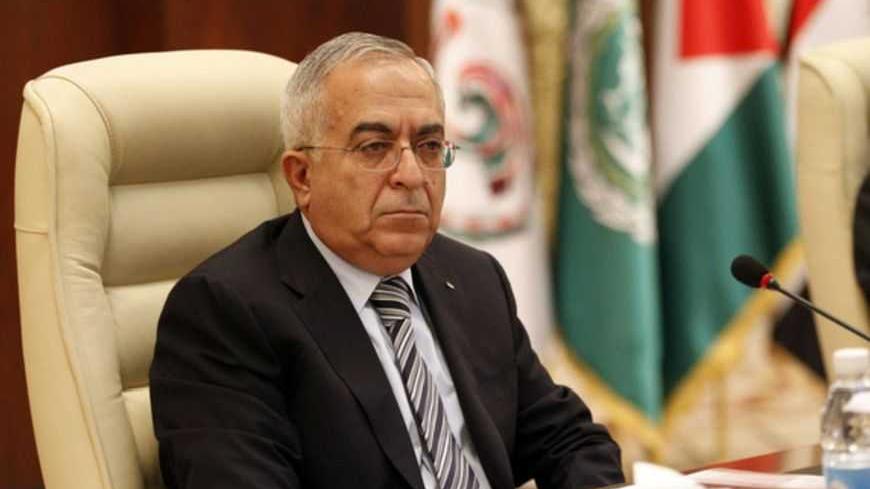 Palestinian Prime Minister Salam Fayyad attends the opening session of an international conference of solidarity with the Palestinian and Arab prisoners and detainees in Israel's prisons, in Baghdad, Dec. 11, 2012. - REUTERS/Thaier Al-Sudani

The next few days will reveal whether Palestinian Authority (PA) Prime Minister Salam Fayyad will stay in his position or be replaced. The Palestinian cabinet is due to vote during its weekly meeting Tuesday, March 26 on the annual budget of the state of Palestine. If the budget is approved and then signed by PA President Mahmoud Abbas, Fayyad will be safe.

Palestine has been full of rumors that Fayyad, a former International Monetary Fund official and prime minister since 2009, might be on his way out following a falling out between him and the Palestinian president.

What exacerbated the case was the resignation of the finance minister, Nabil Kassis. Kassis submitted his resignation to the prime minister in part because he felt that Fayyad had bypassed him to negotiate with some unions who were opposed to the budget. Fayyad accepted Kassis’ resignation immediately without consulting the president. Abbas, who was away at the time, was livid and issued an immediate press statement rejecting the resignation. He asked Tayeb Abdel Rahim — the director-general of his office — to ensure that the problems between Kassis and Fayyad were resolved.

Kassis was said to have been convinced and ready to return to work, but Fayyad stood his ground and refused to reject Kassis’ resignation. Fayyad insisted that if Abbas wanted to retain Kassis, he would need to reappoint him, and Kassis would have to be sworn in as a minister again. The clash escalated the talk about an imminent change in prime minister.

Fatah officials, including central committee member Tawfiq Tirawi, publicly called on Fayyad to resign or for Abbas fire him. Stories were leaked to local media that the director of the Palestinian Investment Fund Mohammad Mustafa would become the next prime minister, but that the decision was to be announced after the visit of the US president.

The discussions about Fayyad to many in Fatah, including Tirawi, are not limited to his problems with the finance minister or his refusal to give handouts to Fatah operatives. Tirawi has publicly complained that Fayyad is positioning himself to be the next president of Palestine. If presidential elections take place and Abbas carries out his oft-repeated threat not to run again, there are no serious contenders to the office and Fayyad, though not a member of Fatah (but politically close to its ideology), might decide to run with a strong possibility of winning.

The visit of US President Barack Obama, however, complicated the situation for the anti-Fayyad wing in the leading PLO movement. The American president praised the progress made under Salam Fayyad’s leadership and was sure to add the name of Salam Fayyad each time he mentioned Mahmoud Abbas.

When Obama visited Ramallah, observers noted something strange in the coverage on Palestine TV. Those watching the visit on TV saw a quick screenshot shift at the moment the American president was about to shake hands with Fayyad, instead showing studio commentators talking about the visit. Apparently the US president spent some time chatting with Fayyad, but the television viewer only saw footage from after Obama moved on from talking to Fayyad.

The political stock of Salam Fayyad increased even more when the US president announced that $500 million of blocked US funds for Palestine would be released. The importance of the announcement is not limited to the cash flow that it presents to the Palestinian government, but also includes the political signal to other international and Arab donors. Obama's official reception in Ramallah and Bethlehem have shown that the negative consequences of the PLO’s bid for statehood at the UN and UNESCO are no longer a block to improving Palestinian-US relations. Fayyad is personally seen as the architect of the new page that Washington has now opened with Ramallah.

Palestinian sources say that the jury is still out on the fate of Salam Fayyad. The coming days will determine whether Abbas will bury the hatchet and have his own reconciliation with Fayyad, or insist on changing his prime minister at a politically and economically sensitive time. The budget debate, its approval and the issuing of a presidential decree authorizing the Fayyad budget will be key in whether Palestine’s longest-serving prime minister will get another day in the sun.