Geoffrey Aronson reviews the fortunes of Palestinian Prime Minister Salam Fayyad, who is now considered by Israel an obstacle to peace. 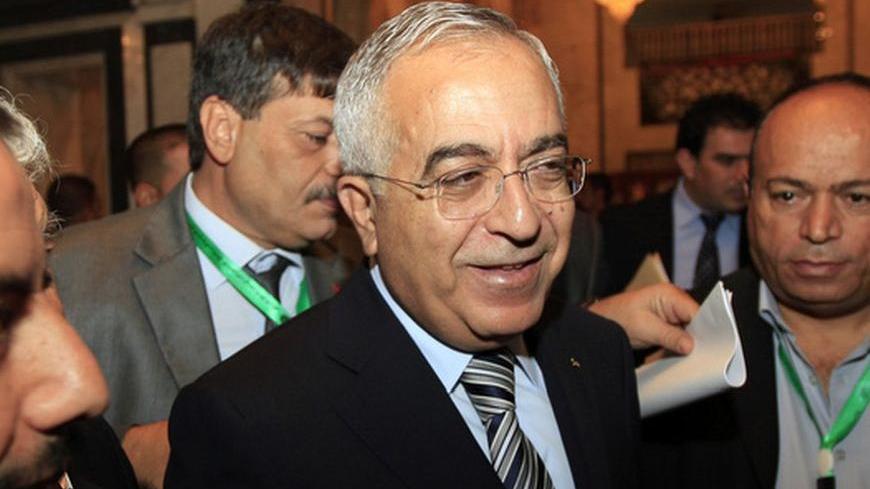 Salam Fayyad, the extra-constitutional prime minister of the West Bank rump of the Palestinian Authority (PA), has come full circle. The international technocrat was catapulted by US President George W. Bush into the top ranks of the Palestinian leadership, becoming first finance minister in 2002 and then prime minister in June 2007 in a constitutionally dubious sleight of hand after Hamas’ expulsion of Fatah forces in Gaza.

But no matter — together with Mahmoud Abbas, the duo formed America’s Palestine tag team — marginalizing the power of President Yasser Arafat, then suffering an ignominious confinement in the ruins of the Muqata at the hand of Prime Minister Ariel Sharon. Fayyad in particular offered Americans and Europeans an attractive alternative to the embattled and friendless Arafat. He was an IMF economist, trained in Texas. When Bush looked him in the eye he saw a Texan. Fayyad, together with Abbas, promised to accommodate Bush’s demands for competent governance. They worked with Israel to crush an armed revolt that terrorized Israelis, destabilized Palestinian life throughout the West Bank and made the Gaza Strip ungovernable during the Second Intifada. In return, Washington, so it was hoped, would force Israel to spit out the occupied territories and the state of Palestine would be born.

The bargain has not paid off. Israel and the Obama administration simply pocketed Fayyad’s rehabilitation of the PA ministries, the dismantling of armed opponents of occupation like the Al Aqsa Martyrs Brigade and the parallel campaign against Hamas institutions in the West Bank and Gaza. Gaza went its own way after Fatah forces there were routed in June 2007. Peace and quiet became the new normal in the West Bank, fostering new demands for good performance rather than the expected political and territorial payoff. The ties binding the PA to Israel grew tighter. Abbas himself now describes the PA as “an authority without authority” and regularly threatens to dismantle the PA and hand the keys back to Israel.

Just as Arafat was imprisoned in the Muqata, the territorial box within which the PA operates in the West Bank continues to shrink. Israel’s appetite for land and settlement cannot be sated. It grows without reference to the rules of good governance and security cooperation that Fayyad mistakenly saw as a ticket to freedom. Whenever Abbas or Fayyad attempt to push the envelope — contesting Israel's control of Area C, comprising 60% of the West Bank, or going to the UN for recognition — Israel simply gives a tug on the leash.

“The Palestinians can forget about getting even one cent in the coming four months, and in four months' time we will decide how to proceed,” declared then-foreign minister Avigdor Liberman recently. On Dec. 12, Israel’s minister of finance signed the forfeiture of $115 million in taxes belonging to the PA, which were instead transferred to the Israel Electric Corporation as partial payment for PA debts. The PA also owes large sums to the Israel Water Authority. In the UN Security Council, Undersecretary-General for Political Affairs Jeffrey Feltman decried the move.

“Palestinians,” he noted, “already face a dire fiscal situation that puts at risk the considerable achievements made by the Palestinian Authority in recent years under the leadership of President Abbas and Prime Minister Fayyad. We believe that this unilateral Israeli decision on the use of Palestinian funds undermines the integrity of the Palestinian Authority. If implemented, the plans would represent an almost fatal blow to the remaining chances of securing a two-state solution.”

Fayyad has evidently despaired of his failed state-building strategy. On Dec. 16, the Palestinian official most committed to work in concert with Israel and the West called for a total boycott of Israeli products and the inauguration of a “financial intifada” on Israel. Fayyad has long called for the boycott of settlement-produced products and goods, but this was the first call for a boycott of all Israeli goods, as well as a “disengagement” from the Israeli economy.

Palestinians in the West Bank can no more disengage from the Israeli economy than Fayyad can through good works convince Israel of the error of its ways or compel Washington to move out of its comfort zone. But Fayyad’s problem goes well beyond Israel’s decision to starve the PA of cash. His strategy is simply not paying off, and he is fast running out of friends. Accommodating the concerns of its foreign patrons has embittered his relations with what remains of the Fatah movement. His opposition to Abu Mazen’s UN efforts has increased the estrangement between the two. Washington and the international community have applauded Fayyad’s accounting and governing improvements with words but not with deeds. And despite his politicking skills — there is no ribbon-cutting ceremony in the West Bank he’ll pass up — he fails to connect with the Palestinian public as a political leader.

Only Israel remains as an anchor for his strategy, and it is here that the judgment has been most merciless. Fayyad, like Arafat and Abbas before him, has joined the ranks of those Israel has branded as “obstacles to peace.” This harsh judgment may seem extraordinary to those who see Fayyad as an effective administrator and a well-meaning partner committed to Palestine’s peaceful transition to statehood. But in the eyes of many Israelis who count, he has committed the most grievous of sins — they simply cannot long countenance any Palestinian in a position to challenge Israel’s all-but-absolute control of the West Bank and East Jerusalem.

Arafat’s support for the second armed intifada sealed his doom. When Abu Mazen proved determined to go to the UN for recognition, Liberman decried Abu Mazen as “the greatest obstacle to peace;” said that his resignation would be “a blessing” and suggested concrete steps to remove him. Liberman is only saying what Netanyahu himself thinks, giving voice to an Israeli system corrupted by its sense of entitlement to rule the West Bank.

Israelis have tired of Fayyad’s incessant demands upon them for a reduction in the burden of occupation, just as he has despaired of a consensual roadmap to liberation. They resent his good relations with the West, even as they recognize that Fayyad’s fund-raising skills work in their own favor by assuring budgets for running an occupation now well into its fifth decade, enabling Israel to settle more than a half-million of its citizens beyond its borders. They belittle his political patronage of the boycott of settlement goods and most recently of Israel itself as cheap political grandstanding. Israel’s political and security establishment increasingly prefer the simpler black-and-white challenges posed by its enemies in Gaza than the complexities built into the discredited Oslo process that Fayyad has tried without success to exploit to Palestine’s advantage.