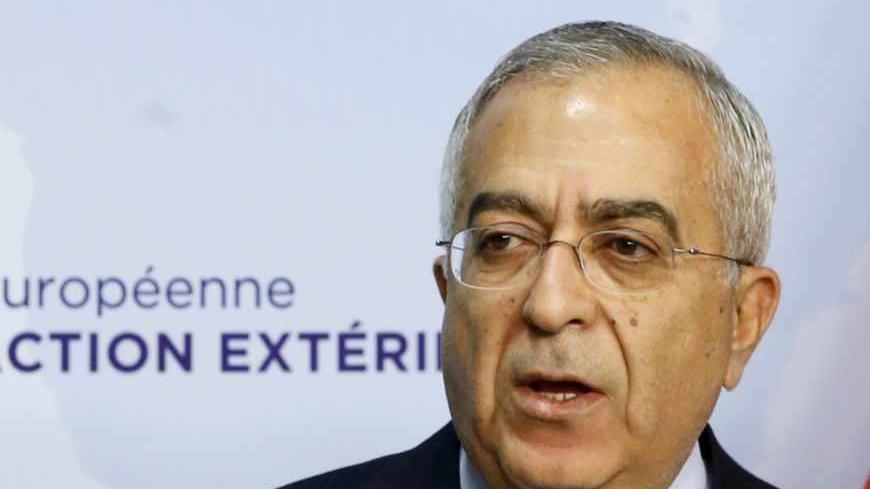 Israel is responsible for the resignation of Palestinian Prime Minister Salam Fayyad. That is what Daoud Kuttab claims in an article in Al-Monitor titled, “Israeli Occupation Brings Down Fayyad.”

“His biggest enemies, as are the enemies of all Palestinians, were the Israeli occupiers whose policies, despite public rhetoric to the opposite, are to perpetuate the occupation indefinitely.”

Salam Fayyad had plenty of reasons to resign. The occupation is just one of them, if it is a reason at all.

Hamas loathed him, and not only because he refused to ignore the challenges posed by Hamas militants in the West Bank, and ordered them arrested. It was mainly because of his expansive liberal economic worldview, which he tried to implement in the Palestinian Authority. More than anyone, he personified the cultural differences dividing Gaza and the West Bank, or more correctly, between the fundamentalist Hamas movement and the wealthy Palestinian elites of the West Bank, who chose to act in accordance with the dictates of the contemporary reality so that they could integrate into the region, and not according to the dictates of the Quran and Shariah law.

Fayyad had no easy path ahead of him. Upon entering the job, he encountered a Palestinian Authority that was fragmented, but even more so, one that was overwhelmed by corruption. Shady practices had spread throughout the territory ever since the days of Palestinian Chairman Yasser Arafat, so that by the time Fayyad took office, they were like a malignant tumor, which had metastasized and swallowed up any principled residues in the administration. While it would hardly be fair to say that all Fatah activists had “a grand old time dipping into the public coffers,” many of them certainly did take their share of the donations and aid money provided by Western nations and a handful of Arab states. In fact, a significant percentage of that money went straight into the pockets of profligate officials, as evidenced by the foreign bank accounts they opened around the world.

Salam Fayyad put an end to that ... almost.

He managed to withstand the pressure, proving to everything that there is an alternative. As an economist by training and a senior official at the International Monetary Fund, Fayyad successfully founded his government on the principle of transparency, but most of all he is remembered for his success in establishing the basic institutions of a future Palestinian state and for the many compliments he received from the West (more on that later).

True, Israel did not make life easy for him. Fayyad managed to improve the quality of life for the people of the West Bank in terms of personal security, public order, and economics, despite repeated threats by Israel’s successive governments to halt the transfer of funds, as agreed to in the Paris Accords, and despite its impediments to the transfer of Palestinian goods through the border crossings. Fayyad’s perspective, which consistently proved itself, was that if there is peace and quiet in the West Bank, without it serving as a launching pad for suicide bombers to attack Israeli cities, the day-to-day life of Palestinians could achieve a certain level of normalcy.

Fayyad succeed in all of that. The sad state of the Palestinian economy is not a result of how he managed it, but mainly a consequence of the economic situation in Europe, which caused many countries to reduce their financial support to the Palestinian Authority.

All this leads to the big question: “If he was so successful, then why did he quit?”

It’s no secret that he had a turbid relationship with Palestinian Authority Chairman Abu Mazen. Fayyad has wanted to “drop everything and go home” for a long time now. He felt like he had reached the limits of his abilities. No, Salam Fayyad did not resign because of Israel. He resigned because of Abu Mazen, and that has been written about and commented on by everyone familiar with the most recent labyrinthine political maneuverings in the Palestinian Authority.

Fayyad lacked political backing. He had no movement behind him to support his actions and serve as a counterweight to the wrath of Fatah activists, who craved positions of power, but came away empty-handed. Salam Fayyad had no supporters to reduce the pressure that Hamas applied to Abu Mazen during all the reconciliation talks, when they demanded that he toss Fayyad out of office. All that Fayyad had was international backing from the Western nations and from Israel too, despite all the obstacles mentioned earlier. They regarded Fayyad as just about the only beacon of light in a corrupt Palestinian administration, which he was trying to fix.

Yes, US Secretary of State John Kerry told him that it was important for him to reconcile with Abu Mazen for the sake of the Palestinian people and the peace process, but even that was to no avail. Kerry’s argument was that with no one to watch out for the public coffers, to maintain order, and to ensure that day-to-day life continued unabated, even the meager hope for some future peace agreement with Israel was unrealistic.

And, of course, Europe also tried to ward off the crisis in Fayyad’s relationship with Abu Mazen, which ultimately led to his resignation.

But none of that helped. Abu Mazen simply didn’t want him there, and Fayyad’s resignation became inevitable.

By the way, in his address to the United Nations’ General Assembly on Nov. 29, during which he obtained observer nation status for Palestine, Abu Mazen boasted about the institutions founded by Fayyad, and even cited them as evidence that the Palestinian Authority had matured enough to earn the title of state. In other words, when it was convenient for Abu Mazen to take pride in Fayyad’s successes, he did so without any qualms, but when he encountered Fayyad’s administrative independence and insistence on transparency in running the Palestinian Authority, he preferred to “accept his resignation” and search for a “yes man” to serve under him.

Salam Fayyad had many reasons to resign, but the occupation was hardly the main one. True, Israel did not make things easy for him, but the biggest problem that he faced was a lack of support from the chairman of the Palestinian Authority, when confronted with the ire of Fatah and Hamas.

True, this is everyone’s loss, but it is the Palestinians’ loss most of all.