Is Fayyad’s Resignation A Wake-up Call for Israel?

The resignation of Palestinian Prime Minister Salam Fayyad plays into the hands of Hamas, jeopardizing the Palestinian Authority and the two-state solution, warns Akiva Eldar. 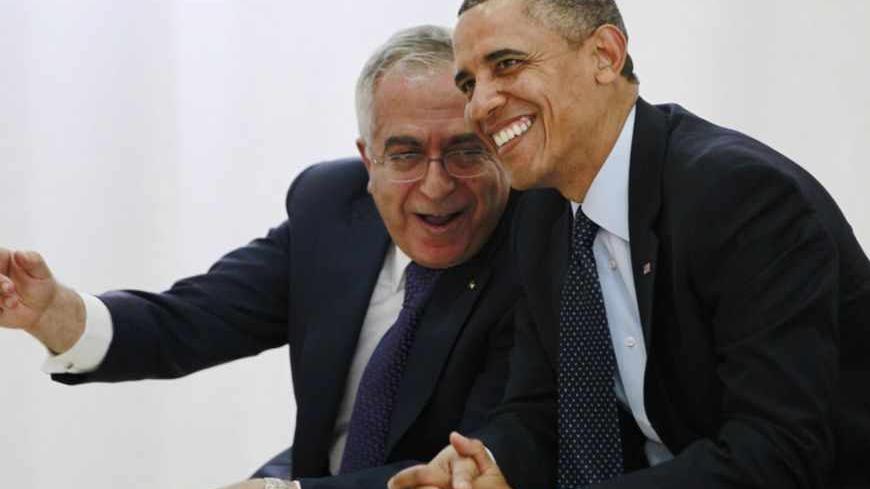 When I was informed of the resignation of Palestinian Prime Minister Salam Fayyad, I remembered what a senior official in the Israeli civil administration said to me a few years ago:

“You know what my biggest nightmare is?” the officer asked, and answered at once. “That one day I arrive for one of my regular coordination meetings with Fayyad and he hands me the keys to the Palestinian Authority, shakes my hand and goes home.”

What that means, explained the officer, is that the Israeli government will be forced to reimpose military rule over the West Bank, pay the salaries of the policemen, teachers, nurses, establish infrastructure and maintain order — all while the ground might be burning and there’s no chance of collecting taxes from the Palestinian population. According to estimates by Israel and foreign economists, the dismantling of the Palestinian Authority would cost Israel some NIS 14 billion per year [almost $4 billion]. That’s all Prime Minister Benjamin Netanyahu and his new finance minister, Yair Lapid, need at the moment.

True, Fayyad has not handed over the keys of the Palestinian Authority to the Israelis. He handed them to President Mahmoud Abbas (Abu Mazen), who continues to withstand the pressures exerted on him to dismantle the authority and to exchange the struggle for a two-state solution with a struggle for equal rights within one state from the Mediterranean to the Jordan River. Fayyad’s departure, however, brings to the top of the agenda a question that has been floating below the surface (and constitutes the nightmare of which the officer spoke): How long will the Palestinian Authority keep acting as the subcontractor for Israeli rule, of the settlement policy and the diplomatic status quo? How long will US, European or Japanese taxpayers agree to bear the load of the “Oslo process,” launched 20 years ago and now on the road to nowhere?

Norwegian Foreign Minister Espen Barth Eide, who heads the Ad-Hoc Liaison Committee for Assistance to the Palestinians (AHLC), took the opportunity of his visits to Jerusalem and Ramallah on April 4 to convey the following message: If the freeze in the diplomatic process continues, many donor countries are likely to stop transferring their contributions to the Palestinian Authority. Haaretz reported that Eide warned Netanyahu with these very words: “We shall not pay the bill forever,” and added, “The money is intended to build the institutions of the Palestinian state, but if such a state is not to exist, there’s no point in giving money.”

Fayyad had served as trustee for Western countries in the Palestinian Authority ever since former Palestinian president Yasser Arafat appointed him as finance minister in 2001 under pressure from Condoleezza Rice, national security adviser for the George W. Bush administration. As long as the former senior World Bank official, who holds a PhD in economics from the University of Texas, in Austin, guarded the Authority’s treasury, leaders of the donor states could assure their citizens that their money was in clean hands. Fayyad cut some 40,000 jobs and established security organizations, educational, health and welfare institutions while at the same time shutting down dozens of Hamas charitable institutions in the West Bank. His political independence — Fayyad is not a Fatah member and ran for parliament as an independent — gave him extra points for reliability in the eyes of the West and Israel. On the other hand, the freeze in diplomatic negotiations, the expansion of settlements and the cold shoulder that Netanyahu’s government has been giving the Palestinian Authority in recent years played into the hands of those in Hamas and Fatah seeking to do Fayyad political harm. They portrayed him as an “American-Israeli” agent. His resume, which does not include expulsion and refugee status or combat or time in Israeli jails, helped them in their quest.

In February 2010 Fayyad told me he was convinced that within less than two years, once he completed the task of establishing the state, “the world, including the Israeli neighbors, will regard the occupation as an anomaly.” He also prophesied that when the world realizes that the Palestinian Authority is able to impose law and order in the territories under its control, to collect taxes and provide services, they will stop calling it “that strange name” and will simply start calling it “a state,” like any normal state.

A little more than three years have passed since then, and after a dramatic UN General Assembly decision to recognize the Palestinian Authority as a non-member state, Fayyad is taking his leave of the leadership of that entity, which still carries that same strange name.

Will the echoes of the door slammed in Ramallah by the most important contact between Israel and the Palestinian Authority, as well as between the Authority and the West, reach Jerusalem and sound a wake-up call? Is Salam Fayyad’s departure the loose stone that will bring down the shaky bridge that can barely carry the weight of the diplomatic solution to the conflict?

The answer to that lies in the hands of two people: Benjamin Netanyahu and US President Barack Obama.