After Fayyad's visit, what's next for Hamas?

Former Prime Minister Salam Fayyad’s visit to the Gaza Strip has raised many eyebrows as to what Hamas is holding in store for its political opponents. 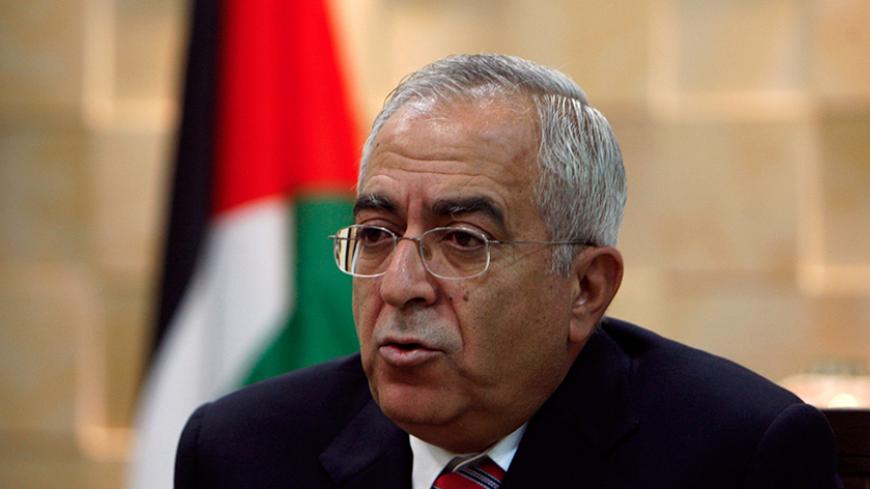 GAZA CITY, Gaza Strip — It has been said that in politics there are no permanent friends or enemies, just permanent interest. Political visions often change and shift, even if this means dealing with political opponents and enemies, and this is what is happening today with Hamas.

This saying describes the alliances and political movements taking place today in the Palestinian arena. This paradigm also seems to be at the core of Hamas’ policy in communicating with its Palestinian political opponents and in building bridges of cooperation based on interests. The two-day visit of Salam Fayyad, the former Palestinian prime minister and member of parliament in the Palestinian Legislative Council, on Dec. 2 to the Gaza Strip under the auspices of Hamas was the most recent tactic in the movement’s politics.

Fayyad’s visit came within the framework of an invitation from the House of Wisdom Institute. Ahmed Youssef, a Hamas leader and the secretary-general of the institute, said the aim of the visit was to discuss views and ideas put forth by Fayyad in an attempt to alleviate the suffering of Palestinians in Gaza.

Youssef told Al-Monitor that Hamas gave the green light to the visit. “Hamas approved the visit of Fayyad to the Gaza Strip as no senior politicians can enter Gaza without the knowledge and approval of the movement. Hamas appraised the visit and provided security to prevent the occurrence of any tension or disturbances,” he said.

Youssef believes that Hamas, by agreeing to receive Fayyad, was conveying the message that Gaza is home to all Palestinians and is not limited to a certain faction or party.

“Fayyad is a known political figure. He was minister of finance in the unity government before the [Palestinian] split in 2006 and halfway through 2007, and he has been known for his integrity. Following the tragic division events in June 2007, he was appointed as prime minister of the caretaker government. At the time he took a series of decisions such as halting the payment of some employees’ salaries, and we are well aware that the Palestinian security apparatuses, the Palestinian Authority (PA), President Mahmoud Abbas and the Fatah movement were behind them. These decisions came as reprisal measures for Hamas’ control over Gaza. Yet Fayyad does not deny that he bears some responsibility of the actions that were made, and he is ready to be held accountable,” Youssef added.

Before Fayyad’s visit, Gaza opened its doors in 2013 to Hamas’ most prominent political opponent, Mohammed Dahlan, who has launched social and economic projects in the Gaza Strip through some of his allies there. Dahlan was dismissed from Fatah in June 2011 on charges of corruption within the movement.

Dahlan started in 2013 and is still carrying out charitable and social projects in the Gaza Strip. This raised several questions about Hamas’ new strategies in dealing with its political opponents.

According to Youssef, Hamas allowed Dahlan to work in Gaza as it needs to turn the page and to benefit from his influence and presence in the Gazan street in order to ramp up popular support to some issues, not to mention his capabilities, by relying on his ability to provide aid to the Gaza Strip to help mitigate the suffering of the citizens.

However, Youssef believes that this tactic could also be a political maneuver on the part of Hamas, especially since the PA did not respond to the movement’s attempts at rapprochement and approval to some initiatives and agreements, such as the Shati Agreement (Beach Refugee Camp Agreement) signed between Fatah and Hamas in April 2014. This prompted Hamas to play other cards and reach out to Fatah figures who are former opponents of the movement, such as Fayyad and Dahlan.

“During most of his visits to Cairo, Abbas has made many remarks harming Egypt’s relationship with Gaza. We, in Hamas, are well aware that Abbas is behind the suffering of Gazans, starting with the closure of the Rafah crossing, tunnels and incitement, which we saw on the part of security apparatuses that have claimed that Gaza is sheltering terrorists. Sadly, the PA has caused Gaza a great deal of harm,” Youssef said.

“Fayyad, on the other hand, comes with a vision and an initiative, seeking to expedite reconciliation and create a platform for communication to end division. This is also the case of Dahlan, who has offered many initiatives and projects such as collective weddings, whereby several young couples, who cannot afford the costs of a wedding, are wedded at the same time. Thus it would be worthy dealing with them, as they benefit citizens through their projects,” he added.

Al-Monitor tried to contact Fatah officials in Gaza to comment on Fayyad’s visit to the Gaza Strip and Hamas’ openness to its political opponents, but they refused to comment on the issue.

Political analyst Akram Atallah told Al-Monitor, “Hamas has been facing a great deal of pressure, which prompted it to be open to its opponents. Had the situation been the same in Gaza — where Hamas used to have the upper hand in every matter — it would have continued to manage it as a de facto authority. However, given the obstacles, stalemates and its failure to run the Gaza Strip — which it has been controlling for nine years — Hamas had to look for partners, such as Fayyad and Dahlan, to help it out of its crisis.”

“Hamas has been facing hardships in managing the Gaza Strip, which pushed it to search for parties to break the stalemate. Also, the movement has been accusing Abbas of turning his back to the reconciliation and of evading agreements, such as the Beach Refugee Camp Agreement. Hamas is trying to sway his opponents, such as Dahlan and Fayyad, to pressure Abbas. Should an agreement be reached with them, this would suggest that Hamas has the ability to forge new allies, which could pressure the president,” Atallah said.

Atallah also said that Hamas is banking on its relationship with Dahlan to defuse the tension with Egypt. With Fayyad, on the other hand, Hamas could forge new alliances in the Palestinian arena in the face of Abbas.