The resignation of Palestinian Prime Minister Rami Hamdallah has exposed the lack of legitimacy of a prime minister not appointed through a democratic process. 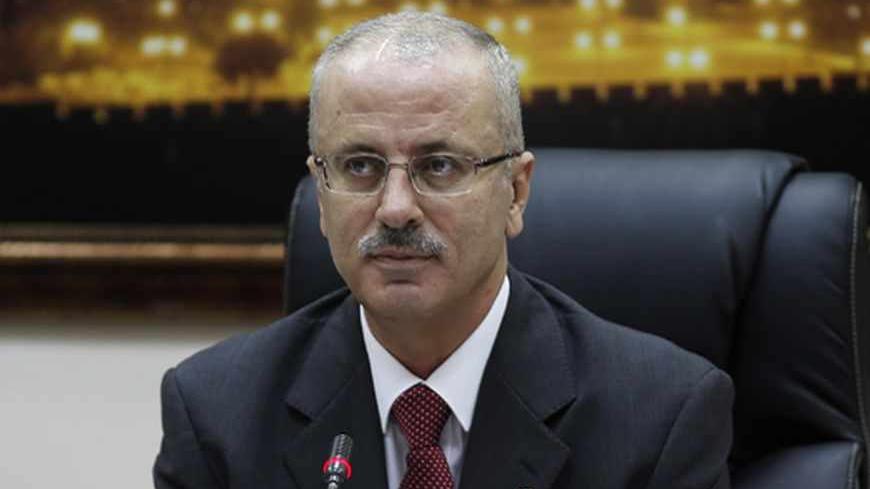 Press reports in Palestine covering the Hamdallah-Abbas controversy focused on the mode of transportation. When after 16 days in office he decided to resign as prime minister on June 22, Palestinian Prime Minister Rami Hamdallah drove to his home in Anabta using his own car without a driver or an entourage. He went to the president’s Ramallah office in al-Muqata at 6 p.m. in the same manner. But when he left al-Muqata, the full security entourage accompanied Hamdallah home. Some interpreted that as a retraction to his resignation. It wasn’t. Abbas and Hamdallah seem to have agreed on an orderly — rather than an abrupt — transitional period in which the latter stays in as a caretaker prime minister until a new premier is found.

The resignation drama started on June 20, with unsourced press reports that Hamdallah had submitted his resignation because of unclear lines of responsibility, reflecting a much larger legitimacy problem.

The bias toward the presidency escalated after Haniyeh and his Hamas supporters rejected the authority of Abbas, forcing the Palestinian president to dismiss Haniyeh and appoint Salam Fayyad in 2007. The defacto suspension of the Palestinian Legislative Council meant that the appointed government did not gain a vote of confidence from the Palestinian representatives. When Fayyad attempted to question the power of the Palestinian presidency — with the refusal to allow back the resigned Minister of Finance Nabeel Kassis — he found himself on the losing end of a power struggle, and eventually had to hand in his resignation in April 2013. Hamdallah appears to have noticed this issue much earlier and seemed to have insisted on retaining all the legal and administrative powers that came with the office.

Hamdallah’s appointment has had other problems. For months before his designation, pro-Fatah operatives and leaders focused on another candidate for the office. Mohammad Mustafa, a Harvard graduate and the chairman and CEO of the Palestine Investment Fund, was the favorite to many Fatah leaders.  Hamdallah was brought in at the last second, and Mustafa, along with Gazan born Ziad Abu Amr, were appointed deputy prime ministers. The former president of the largest Palestinian university, An-Najah in Nablus, has publicly said he hoped to stay prime minister until Aug. 14. On this date, an agreed to prime minister — as part of the reconciliation process — would be found. Hamdallah has not officially resigned from his academic post, but rather has taken a leave of absence.

The fact that Hamdallah had clearly accepted a temporary position seems to have led some to believe that the real prime minister is one of the deputies.

Hamdallah has so far been silent about his resignation, which was publicly confirmed by Nabil Abu Rdeneh, the official spokesman of the president. While director general of the presidency Tayeb Abdel Rahim and head of Palestinian intelligence Majid Faraj visited Hamdallah in his Anabta home, it wasn’t clear if the meeting produced any results that would cause Hamdallah to withdraw his resignation.

Abbas, who met Hamdallah in Ramallah, eventually decided to accept the resignation.