Candidates for the Palestinian legislative elections are facing attacks on their properties and threats in an attempt to prevent them from running in the elections. 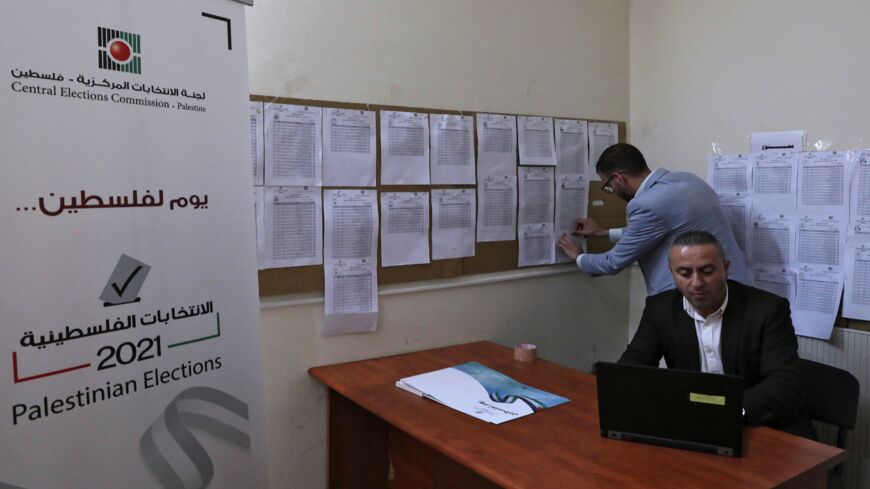 Employees of the Palestinian Central Elections Commission display electoral lists ahead of the upcoming general elections, at the commission's district offices in the city of Hebron in the Israeli-occupied West Bank, on April 6, 2021. Palestinian legislative elections are scheduled for May 22, with a presidential vote to follow on July 31. - HAZEM BADER/AFP via Getty Images

RAMALLAH, West Bank — The frequency of threats and attacks against candidates in the Palestinian legislative elections has increased over the past few days, and internal parties are most likely behind them. However, none of the concerned parties (security forces or public prosecution) announced any of the results of their investigations into these incidents.

In Ramallah, in the central West Bank, unknown men attacked on April 15 the car of the head of the Unified Palestinian Movement list, Khaled Dweikat, while it was parked in front of his apartment in the Ersal neighborhood. Dweikat told Al-Monitor he was surprised to see “the back window of his car broken in the morning. We thought at first it was a shooting, but after some inspection, we figured out the attack was carried out with iron tools.”

Dweikat said he lodged an official complaint with the General Intelligence Service of the Palestinian police, the Central Elections Commission and the Independent Commission for Human Rights, and the investigations are underway.

Dweikat explained, “I believe the attack is linked to the elections. I do not have enemies at the personal level, unless the investigations prove otherwise.”

A more serious attack occurred in Hebron in the south of the West Bank on April 12 when a shooting targeted the house of attorney Hatem Chahine and then his office. Chahine is a candidate of the Future list, which represents the Democratic Reform Current led by dismissed Fatah leader Mohammed Dahlan.

Chahine told Al-Monitor that at 2:30 a.m. on April 12, “A car pulled over and two masked, armed men stepped out and started shooting heavily at the house, based on the footage of the surveillance cameras.”

Chahine added, “After the car took off, the Criminal Investigation Unit of the Palestinian police was alerted, and the house was inspected. They found bullets in the main entrance and in my wife’s car that was parked behind the entrance’s gate.”

He noted police found dozens of shell casings at his place and inspected the surveillance camera tapes. Chahine found out a few hours later on his way to work that his office was targeted with a similar shooting.

On whether the attack and the elections are connected, Chahine said, “What happened is the result of incitement and tension practiced by the ruling party,” referring to Fatah. He said the attack and whoever is behind it was the inevitable result of the incitement campaign, pointing out that there is direct and public incitement against the Future list on social media from Fatah figures, and the incitement has reached the point that some refer to the Future list as “the treacherous current.”

The Palestinian legislative elections, scheduled for May 22, have already been marred by tension recently in light of the leaked, unconfirmed reports that the Palestinian leadership may cancel the elections amid ongoing threats against the candidates. Meanwhile, electoral lists are preparing for the campaigning phase that will start on April 30, and threats and attacks are expected to increase in parallel.

The director of the training, awareness and advocacy department at the Independent Commission for Human Rights, Islam al-Tamimi, told Al-Monitor the commission has received complaints that some candidates on some lists have received threatening calls from unknown parties aimed at discouraging them from participating in the elections. He said some complaints are under study to take technical and legal opinions from the commission’s complaints department, and some were referred to the prosecution and the police for investigation.

Tamimi refused to reveal the identity of the targeted candidates, stressing that these threats are attacks on the right to political participation. The police are obligated to provide protection, investigate these threats and expose the parties, as it is a dangerous matter that might impede some candidates or lists from competing in the electoral process, he added.

Tamimi said the complaints varied between shooting threats and property and vehicle assault, either through phone contact or blackmail on social media. He considered this a dangerous indicator and said the threats were made even before the start of the electoral campaign, which portends an increase in their intensity.

For his part, Central Election Commission spokesperson Farid Toamallah told Al-Monitor the commission is looking seriously into the file of freedoms, and for that reason, it is cooperating with the Independent Commission for Human Rights to monitor all violations and breaches of freedoms.

Toamallah said any citizen who faces a threat or violation can submit a complaint to the Central Elections Commission or the Independent Commission for Human Rights. In both cases, the Electoral Commission will seriously follow up on the matter with official authorities.

He added, “We are almost at the electoral campaigning stage, and the freedom space must be wider because political shows and interviews will be broadcast. This calls for guaranteeing freedoms, which are among the pillars of any fair elections. The general atmosphere must be comfortable, allowing people to gather and express their opinions.”

Toamallah stressed the need for state neutrality with its security, executive and media agencies, its ministries and institutions. He said, “We submitted a letter to the prime minister, who issued a circular to the ministers, institutions and executive bodies to maintain impartiality and not use the state’s capabilities in favor of a certain list. This comes after we detected and protested against a minister who was promoting an electoral list on social media.”