Netanyahu's warns "closest friends" that Iran nuclear deal will "not obligate us." 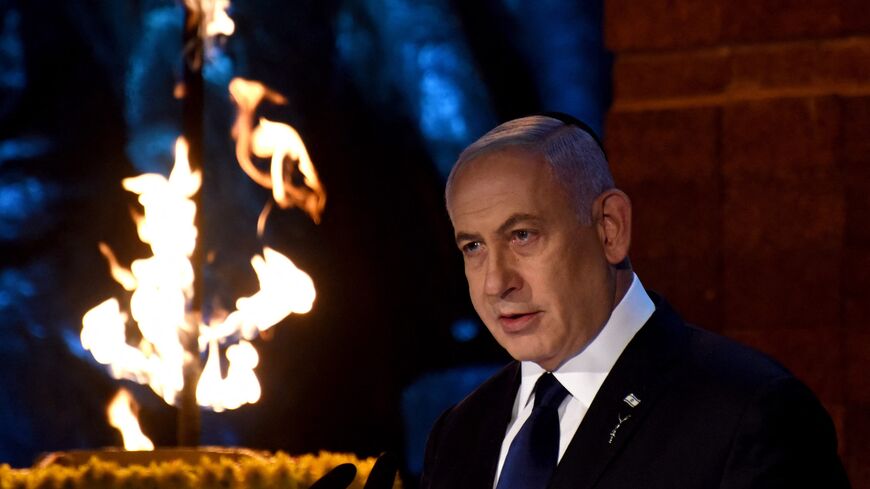 Israeli Prime Minister Benjamin Netanyahu delivers a speech at the Holocaust Martyrs' and Heroes Remembrance Day ceremony in memory of the 6 million Jewish men, women and children murdered by the Nazis and their collaborators, at the Yad Vashem memorial in Jerusalem on April 7, 2021. - DEBBIE HILL/POOL/AFP via Getty Images

Israeli Prime Minister Benjamin Netanyahu heavily criticized the Iran nuclear deal during a speech on the Holocaust on Wednesday. His remarks could be a message to the United States as it attempts to reenter the agreement.

Netanyahu characterized an Iranian acquisition of nuclear weapons as an “existential threat” to Israel that his country would fight.

“I say to our closest friends, too: ‘A deal with Iran that paves Iran’s path to a nuclear weapon, a weapon that threatens us with annihilation, will not obligate us,’” he said. “Only one thing will obligate us: to prevent those who wish to destroy us from carrying out their plans.”

The United States entered into the Joint Comprehensive Plan of Action (JCPOA), commonly known as the Iran nuclear deal, in 2015. The agreement removed various sanctions on Iran, including a UN weapons embargo, in exchange for Iran scaling back its nuclear energy program.

In 2018, US President Donald Trump, who was a key Netanyahu ally, withdrew the United States from the deal and reimposed sanctions. Israel, Saudi Arabia and other states allege that Iran seeks to build a nuclear weapon, but Iran says the program is for peaceful purposes. Iran is no longer complying with the JCPOA’s stipulations.

US President Joe Biden made a campaign pledge to return to the JCPOA if Iran first returns to compliance. Indirect talks through the other European, Russian and Chinese parties to the deal took place in Vienna this week with the goal of reviving the agreement. A State Department spokesman said Tuesday that while there was no immediate breakthrough, the negotiations constituted a “healthy step forward.”

Netanyahu has been a critic of the agreement from the beginning and addressed it specifically in Wednesday’s speech.

“The nuclear deal with Iran is once again on the table. Such deals with extreme regimes are worthless,” he said.

His reference to Israel’s “closest friends” could be a reference to the Biden administration, since the United States is Israel’s largest political and military ally.