Meetings on the Iran nuclear agreement will continue in Vienna as Iran continues its demand for "Trump sanctions" to be removed. 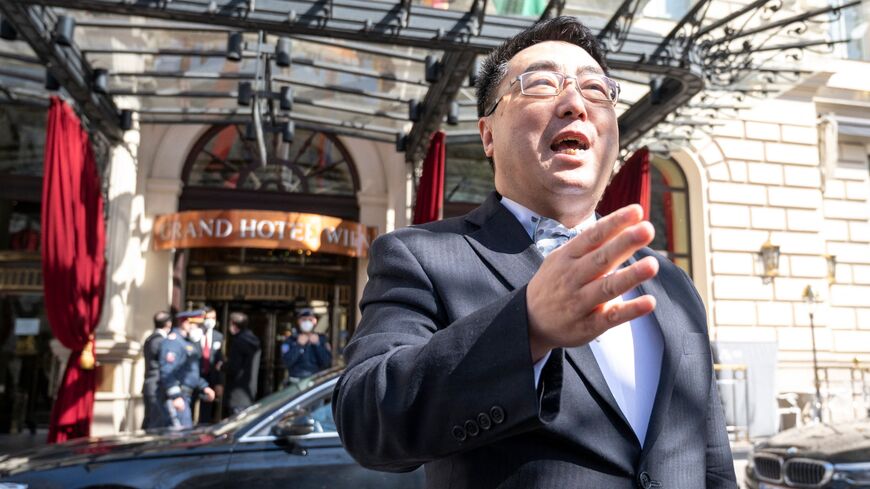 The ambassador of the Permanent Mission of the People's Republic of China to the United Nations in Vienna, Wang Qun, speaks to journalists in front of the Grand Hotel Wien after closed-door nuclear talks with Iran in Vienna on April 9, 2021, where diplomats of the EU, China, Russia and Iran held their talks. - JOE KLAMAR/AFP via Getty Images

Negotiations on the Iran nuclear deal will continue next week. There has been some progress made between Iran and the United States through intermediaries, though an agreement is not imminent.

The European Union announced Friday that meetings on the Joint Comprehensive Plan of Action (JCPOA) will reconvene in Vienna next week. Representatives of the signatory countries of the United Kingdom, France, Germany, Russia, Iran and China will participate again in the EU-chaired meetings. This group will continue separate talks with the United States on the JCPOA, the EU said in a statement.

The JCPOA, more commonly known as the Iran nuclear deal, removed sanctions on Iran in exchange for cooperation on its nuclear program. The United States left the agreement under President Donald Trump in 2018 and reimposed sanctions. The administration of President Joe Biden is holding indirect talks with Iran in Vienna at present through intermediaries of the countries that remain party to the agreement.

“All Trump sanctions were anti-JCPOA & must be removed,” Zarif said on Twitter.

The Biden administration has said that it will reenter the agreement if Iran first returns to compliance. On Wednesday, State Department spokesman Ned Price said the United States would consider removing sanctions “inconsistent with the JCPOA” in a bid to revive it.

“We are prepared to take the steps necessary to return to compliance with the JCPOA, including by lifting sanctions that are inconsistent with the JCPOA,” he told reporters.

“The precise nature of any sanctions relief is the subject of diplomacy,” Price said.

The Iranian foreign minister, by alluding to sanctions put in place by Trump, and the State Department, by saying it could remove “inconsistent” sanctions, could be showing a potential common ground between the two sides.

Price described the deliberations as “constructive” Thursday, but he said a deal is not imminent yet.

“We would also, however, hasten to not allow expectations to outpace where we are,” said Price at another press conference. “After all, we have said this will be hard.”