Police clashed with protesters in a religious neighborhood in Jerusalem and a mixed part of Tel Aviv. 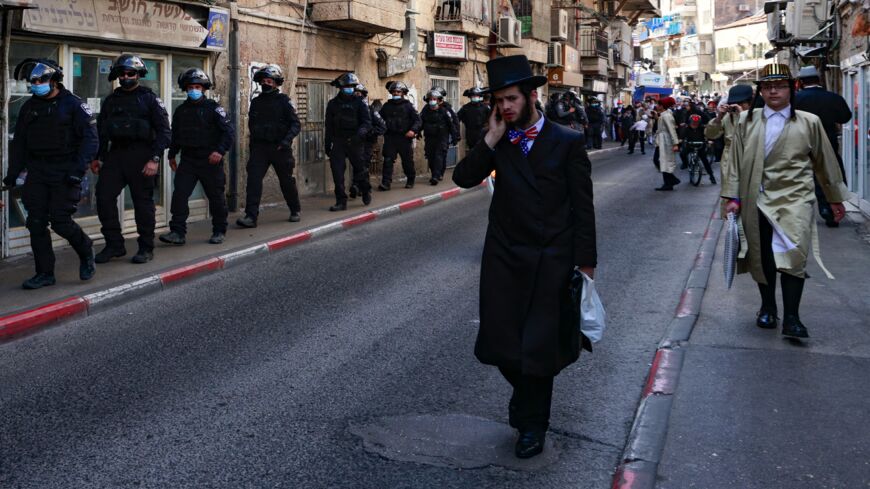 Orthodox Jewish men, some dressed in costumes to celebrate Purim, watch as Israeli policemen patrol in the neighborhood of Mea Shearim in Jerusalem, on Feb. 28, 2021. - MENAHEM KAHANA/AFP via Getty Images

Israeli police clashed with the public in both Jerusalem and Tel Aviv last night.

Police entered Jerusalem’s Mea Shearim neighborhood to arrest a suspect. The area is predominantly populated by devoutly religious Jews known as Haredim, or ultra-Orthodox. During the raid, locals trapped police in a building by chaining the doors shut. Others pelted the officers with objects and damaged their vehicles. The police eventually freed them, and three officers were injured in the ordeal. The suspect was arrested today for allegedly taking part in violent protests in the neighborhood, according to The Times of Israel.

Many Mea Shearim residents have a contentious relationship with Israeli authorities. Some reject the legitimacy of the state of Israel on religious grounds. On Israeli Independence Day last week, Israeli police alleged that a group of people who burned Israeli flags and took memorial wreaths from soldiers’ graves were from Mea Shearim, according to The Jerusalem Post.

Also last night, Israeli police clashed with protesters in Tel Aviv’s Jaffa neighborhood. The Jewish and Arab protesters were protesting property purchases by Jewish nationalists in the traditionally Arab area. The current tensions began on April 18 when two Arabs assaulted a rabbi who was looking at properties, The Associated Press reported.