Clashes between the ultra-Orthodox and police have intensified over lockdown orders that, among other things, call for the avoidance of public prayers. 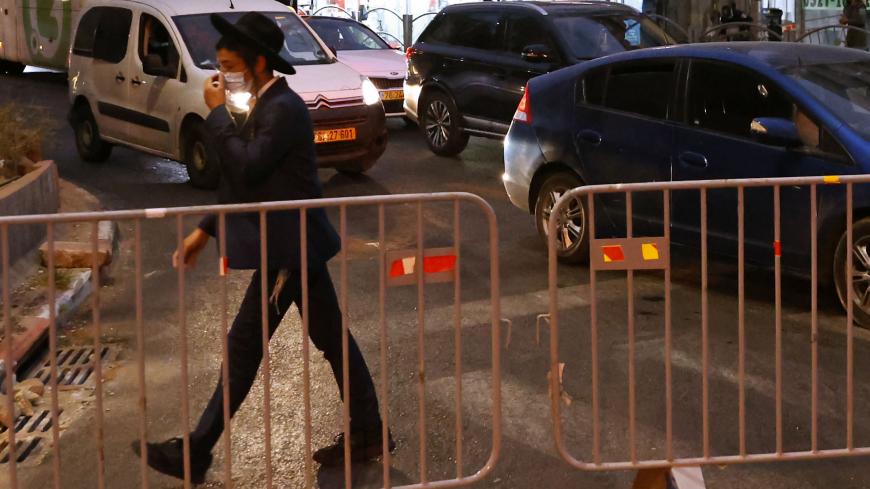 A young ultra-Orthodox man walks past a barrier set up by Israeli police on the road in the religious Israeli city of Bnei Brak, near Tel Aviv, amid measures put in place by Israeli authorities in a bid to stop the spread of COVID-19, on Sept. 8, 2020. - JACK GUEZ/AFP via Getty Images

Police officers came under attack the night of Oct. 6 at the ultra-Orthodox settlement Modi’in Ilit while trying to disperse a crowd of hundreds. A first police force entered the West Bank city in order to enforce coronavirus lockdown restrictions. Police had received information about public prayers in synagogues there, despite the ban on public gatherings. But when they arrived, their car was surrounded by hundreds of ultra-Orthodox residents, including children, who shouted at them, chanted songs and tried to block their way. Reinforcements had to be called in. For several hours, the residents threw objects — including stones, bottles, pieces of metal, fireworks and diapers — at police officers and police vehicles. Four police officers were injured, and seven people were detained for disturbing public order.

Police forces were also attacked Oct. 6 in Jerusalem's ultra-Orthodox Mea She’arim neighborhood. Media outlets reported that many synagogues in the neighborhood blocked their windows with boxes or black curtains to prevent people from documenting what was going on inside. According to these reports, more extreme ultra-Orthodox communities posted guards at all entrances of their synagogues to stop nonmembers of the sects or anyone curious from entering. Other reports said the Jerusalem police had reached some sort of understanding with ultra-Orthodox leaders, allowing several radical ultra-Orthodox communities to hold mass events on the condition that there would be no public documentation of that.

Police denied these reports about an understanding reached with the ultra-Orthodox. Indeed, police were stationed through the evening on the outskirts of the neighborhood, some 100 meters (330 feet) from the Toldot Aharon Synagogue. Little by little, a crowd grew around them. Then, shortly after the end of the Sukkot prayers, when the synagogues emptied, police decided to enter the neighborhood, arresting people and youngsters who were out in the streets. Residents threw objects at the police officers, injuring two of them. Police said 17 people were arrested.

On Oct. 5, some 5,000 ultra-Orthodox gathered in Ashdod, despite lockdown restrictions, for the funeral of Hasidic Rabbi Mordechai Leifer. Leifer, 65, known as the "Rebbe of Pittsburgh," had died the night before after contracting COVID-19. The funeral ceremony ended with clashes between mourners and police who sought to disperse the crowd. Video clips taken at the procession showed that while many — but not all — did wear face masks, they did not follow social distancing guidelines. Police said in a statement that the funeral procession had been approved for a group of a few hundred participants who were expected to wear masks and keep a proper distance between each other.

Asked about the gathering at the Ashdod funeral, ultra-Orthodox Interior Minister Aryeh Deri said most of the ultra-Orthodox communities do obey lockdown orders. Still, Deri warned, "If anyone (within ultra-Orthodox communities) think that they don’t need to obey these orders because it’s the police or the secular government that decides — then they must understand that we are talking about a matter of life and death. Neighborhoods that remain red [with a high coronavirus infection rate] won’t be reopened when the lockdown ends.’’