In a demonstration of the economic dividends of the Abraham Accords, Abu Dhabi's Mubadala Petroleum is buying Israeli Delek Drilling’s shares in the Tamar natural gas field. 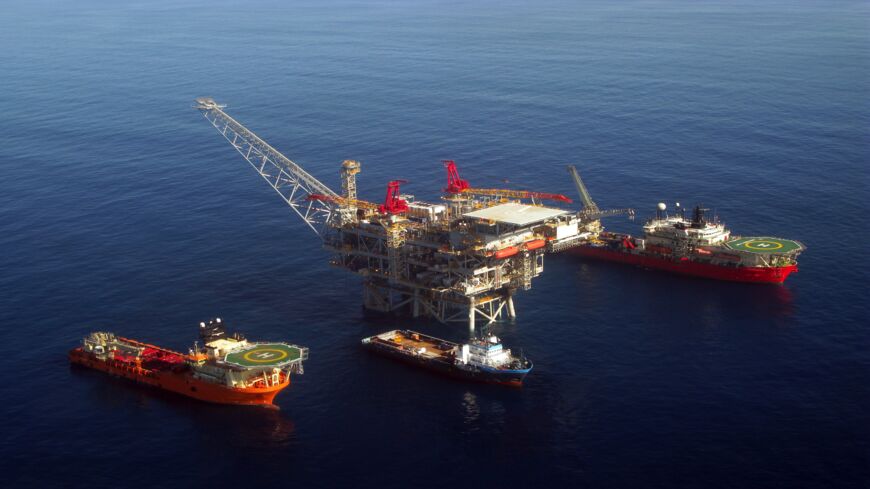 In this handout image provided by Albatross, the Tamar drilling natural gas production platform is seen some 25 kilometers west of the Ashkelon shore in February 2013 in Israel. - Albatross via Getty Images

The Israeli energy company Delek Drilling reported on April 26 that it signed a nonbinding memorandum of understanding to sell its stake (22%) in the Tamar natural gas reserve in the Mediterranean Sea to Mubadala Petroleum of Abu Dhabi.

This is the largest and most significant commercial agreement signed between Israel and the United Arab Emirates since the normalization agreement (the Abraham Accords) was signed between the nations, which opened diplomatic and economic contacts between the countries.

Energy Minister Yuval Steinitz said to Al-Monitor, "The agreement to sell Delek’s stake in the Tamar natural gas reserve to a company from Abu Dhabi is further proof for the success of the gas plan that I initiated and fought to pass a number of years ago. The gas monopoly came apart, and large international companies are coming in and expressing their faith in our gas market. Now, after the signing of the Abraham Accords, a company from an Arab nation is investing in Israel’s gas market. I believe that this is the beginning of cooperation between the nations in the energy field and in additional economic and diplomatic fields to the benefit of our citizens.”

According to Steinitz, this is a significant step in economic relations between the nations — but it’s only the first on the road to strengthening these ties, with emphasis on the energy market. He further said that cooperation with the Emirates in the field attests to the deep connection that was established almost immediately upon signing the agreement with this nation and shows that the Middle East can create big changes when joining forces.

It should be noted that the UAE seeks to enter the Eastern Mediterranean Gas Forum, of which Israel, Egypt, Greece, Cyprus and the Palestinian Authority are members, as an observer, but at this stage the Palestinians oppose it. This move would strengthen the forum thanks to the investment capacity, experience and international contacts of the Emirates.

Delek Drilling established contacts with many international entities in the energy and financial fields, which expressed interest in buying its rights to Tamar. But in the end, in light of what Delek described as a variety of strategic, commercial and financial considerations, the Emirati Mubadala Petroleum was chosen.

The deal is taking place in accordance with a plan to develop additional gas fields in the Mediterranean Sea, which was authorized in 2015 by the Israeli government in order to regulate the structure of the local natural gas market as well as to enable a decentralized and competitive structure. As part of the plan, it was agreed that Delek Drilling would sell its holdings in the Tamar reserve within six years in order to focus on activity in the Levitan reserve (of which it holds 45.33%). Accordingly, in 2017 Delek Drilling completed a sale of 9.25% of its stake in the Tamar petroleum reserve, and it had to sell off the rest of its holdings by the end of this year.

Because of concerns regarding the sale of a national resource to a foreign company from Abu Dhabi, the state could have put certain conditions on the sale and imposed greater supervision over the contracts Mubadala signs to sell gas as part of the conditions for authorizing the deal. The Energy Ministry says it doesn't think there is any danger to the security of the state in this deal and there is no problem with the financial stability of Mubadala, which is part of the enormous investment fund of the Abu Dhabi government, and thus the deal would likely be authorized with no significant obstacles.

The Tamar reserve has seven partners. Delek Drilling, as noted, holds 22%; other partners include the giant Chevron, which is also the operator and holds 25%.  According to the latest NSAI reserves report published in January 2020, the scope of the verified and expected reserve of Tamar, after production of more than 69.3 billion cubic meters (bcm), stands at approximately 300 bcm of natural gas and 14 million barrels of condensate.

The Tamar reserve — located roughly 90 kilometers west of Haifa at a total depth of 5,000 meters under the sea, and at a water depth of 1,700 meters — was discovered in 2009. Production from the reserve started in 2013 by means of six wells from which gas is drawn by means of two 140-kilometer pipes to the Tamar raft, where most of the treatment of the natural gas takes place. From the raft, the natural gas is transferred to the receiving pipe at Ashdod and then piped to markets in Israel, alongside the export of small quantities to Egypt and Jordan.

The production of natural gas from the reserve has made the State of Israel energy independent for the first time in its history. Until the extraction of gas from Tamar, Israel depended on imports of fuel from foreign countries in order to produce electricity and supply energy to the industrial sector.

Prime Minister Benjamin Netanyahu committed in his speech at the April 23 Climate Summit organized by US President Joe Biden to totally end the use of fossil fuels by 2050. Thus, he said, Israel would cooperate with the Gulf states, the UAE and Bahrain to develop and disseminate the use of solar energy. Israeli companies in this field are indeed in advanced contacts for research purposes and to establish solar farms to generate energy.

Mubadala Petroleum, an international company for the discovery and production of natural gas, which holds natural gas assets in 10 countries, is a fully owned daughter company of Mubadala Investments, which is owned by the government of Abu Dhabi. In 2018, Mubadala bought partial ownership of the Zohar and Nur gas reserves in the territorial waters of Egypt.

The geostrategic significance of this deal is huge since it brings the Emirates deep inside the energy market by means of the Abraham Accords and is actualizing the hopes tied to this agreement.