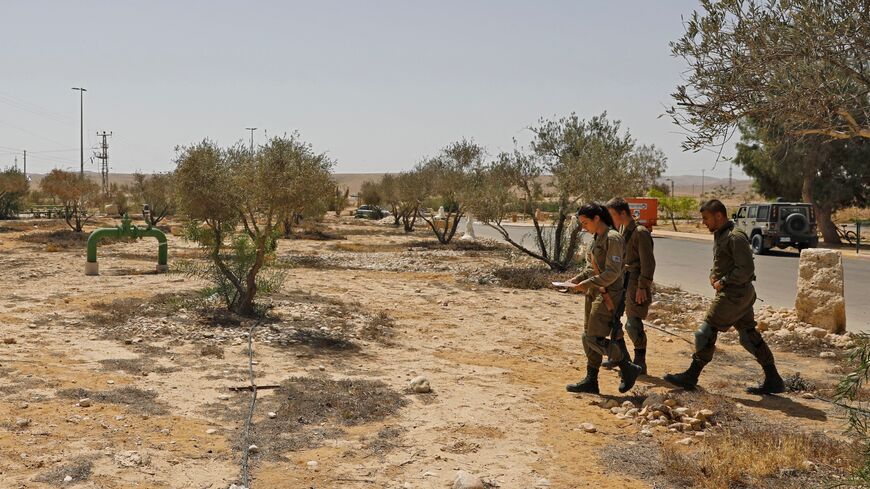 Israeli soldiers search for debris after a missile launched from Syria landed in Ashalim settlement, about 35 kilometers (22 miles) south of Beersheba, not far from the Dimona nuclear power plant in Israel's southern Negev desert, on April 22, 2021. - AHMAD GHARABLI/AFP via Getty Images

The new deputy commander of the elite Quds Force of Iran's Islamic Revolutionary Guard Corps threatened Israel on Thursday following a rare missile strike against the Jewish state that Israel blamed on the Syrian military.

Brig. Gen. Mohammad Reza Fallahzadeh said, “The occupier Zionist regime should know that the resistance groups are stationed all over the planet next to their bases and are bringing them closer to collapse at any moment.” His words were reported by the semi-official Fars News Agency.

The newly appointed Fallahzadeh made the comments at a ceremony in the central city of Isfahan honoring his predecessor, Mohammad Hejazi, who somewhat mysteriously died last week. Iran and its allies such as Hezbollah in Lebanon and Hamas in Gaza often call themselves “the resistance,” and his use of the term likely refers to such groups.

Iran-Israel tensions are at a high and the remarks came after a missile fired from Syria hit Israel earlier Thursday. In the wee hours of the morning, a missile landed near Israel’s nuclear reactor in the central Negev desert. The Israel Defense Forces said they struck the Syrian launch site in response.

Reuters quoted an Israeli military spokesman as saying the missile in question was an SA-5 fired by Syrian forces against Israeli aircraft. The spokesman said the surface-to-air missile overflew its target and struck a site about 30 kilometers (about 20 miles) from the Dimona nuclear reactor.

The Syrian military reported Israeli airstrikes on their positions at the time. Israel regularly strikes Syrian and Iranian military positions in Syria.

However, there was some speculation about a possible Iranian attack in Israeli media prior to the missile strike. The Times of Israel reported April 17 on an opinion piece in an Iranian newspaper that called for a revenge attack on Israel’s nuclear reactor. The piece followed an explosion at an Iranian nuclear site April 11. Iran blamed Israel for the blast. Israel did not take credit for it, but has been under a state of alert since.