Iran talks tough ahead of indirect nuclear negotiations with US

Iranian and US officials will not meet directly in Vienna tomorrow amid the first negotiations aimed at a return to the 2015 nuclear deal, officials have said. 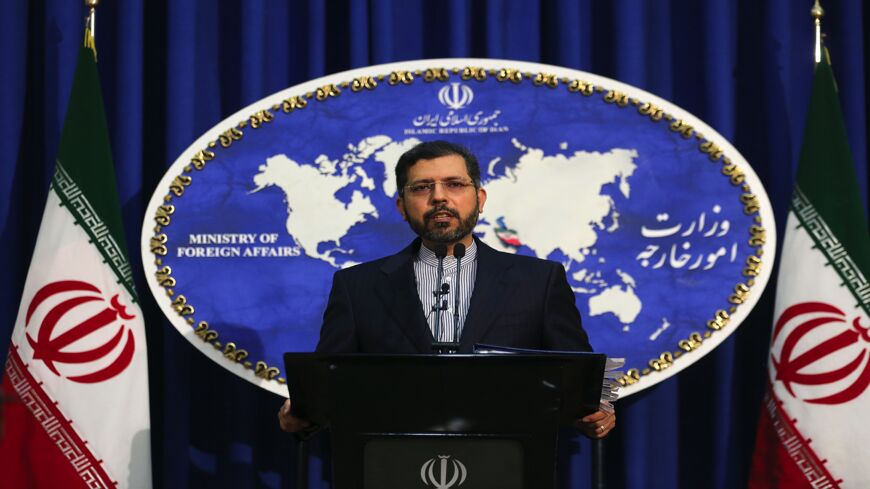 Iranian Foreign Ministry spokesman Saeed Khatibzadeh gestures during a press conference in Tehran on Feb. 22, 2021. Iran hailed as a "significant achievement" a temporary agreement Tehran reached with the head of the UN nuclear watchdog on site inspections. That deal effectively bought time as the United States, European powers and Tehran try to salvage the 2015 nuclear agreement that has been on the brink of collapse since Donald Trump withdrew from it. - ATTA KENARE/AFP via Getty Images

Iran is talking tough ahead of planned indirect talks with the United States in Vienna on Tuesday over a prospective return to the 2015 Iran nuclear agreement.

Iran’s Foreign Ministry on Monday publicly rejected any piecemeal approach to US sanctions relief in exchange for Tehran’s step-by-step return to compliance with the 2015 so-called Joint Comprehensive Plan of Action, or JCPOA.

“The path is clear. All US sanctions [against Iran] must be removed at once,” Iranian Foreign Ministry spokesperson Saeed Khatibzadeh was quoted as saying today by Iran’s state-run Press TV.

“Then, this must be verified and only then, the Islamic Republic will take its step [to return to compliance with the 2015 nuclear agreement],” Khatibzadeh said.

Representatives from all signatories of the 2015 agreement — which the US administration of former President Donald Trump unilaterally walked out of in 2018 — will hold virtual talks tomorrow.

The US administration of President Joe Biden aims to bring Iran back into compliance with the deal’s limitations on Tehran’s nuclear capabilities.

State Department spokesperson Ned Price said on Monday that the US intends the talks to result in a "mutual return" to compliance to with the deal, "meaning on the part of Iran and on the part of the United States."

Price confirmed today that US special envoy for Iran, Robert Malley, will lead the US delegation in Vienna, but said US negotiators do not expect "an early or immediate breakthrough" from the talks.

"These discussions, we fully expect, will be difficult," he told reporters today.

Iranian officials have been demanding broad relief from US economic sanctions imposed by the Trump administration after it walked out of the agreement in 2018.

The Trump administration launched a so-called “maximum pressure” campaign against Iran that year in an effort to force Tehran to cut its support for proxy militias in conflict zones in the region.

Biden administration officials have said Iran’s support for regional militias and expanded ballistic missile program must be the subject of “follow-on” negotiations after compliance with the JCPOA is restored.

Iranian officials have so far rejected the possibility of talks with the United States about its regional influence campaign and ballistic missile program.

Khatibzadeh on Monday played down the significance of tomorrow’s summit, calling it a technical meeting between signatories of the JCPOA.

He insisted his government would not talk directly with the United States, and that Tehran’s leaders aim to convince Britain, France, Germany, Russia and China to guarantee US sanctions relief before Iran returns to compliance with the deal.

“If … they could guarantee that the US would comply with its commitments, then the way forward would be open,” the Iranian spokesperson said.

Both Price and White House press secretary Jen Psaki on Tuesday said that the Biden administration remains open to direct talks with Tehran in the future.