France has extended an invitation to the various components of northeast Syria, namely the Kurds, to visit Paris as the latter seeks more influence in the area. 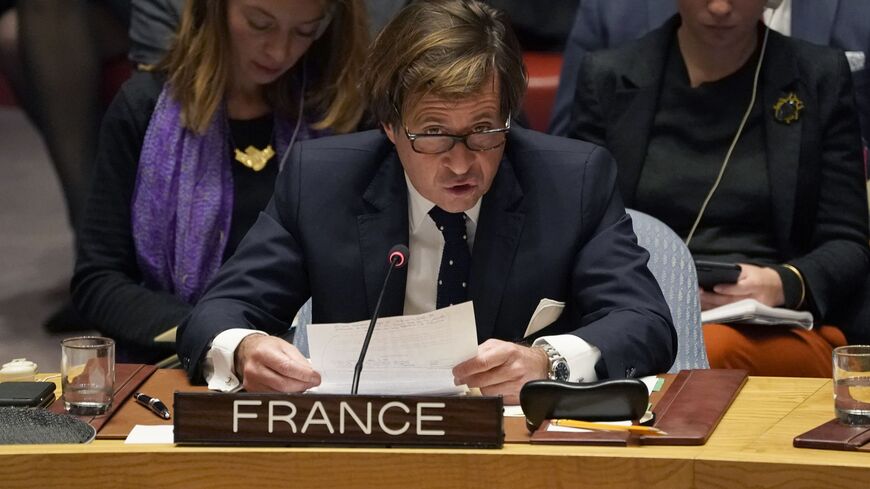 Francois Delattre, ambassador and permanent representative of France to the United Nations, speaks during the UN Security Council meeting on Syria, New York, Feb. 27, 2020. - Timothy A. Clary/AFP via Getty Images

The eastern Euphrates area in Syria topped the news headlines at the end of 2020, as Turkey’s Operation Peace Spring against the Kurds shuffled the cards and opened the way to a multilateral rivalry seeking to control the most important area in Syria. The Russians, Turks and Americans have been actively striving to reinforce their military presence in the area, which is around one-third of the Syrian surface area. Most of it is controlled by the Syrian Democratic Forces (SDF), backed by the US-led international coalition, which are working to cement an understanding with the Russians to prevent new Turkish intervention in the area.

A French envoy visited in early April the northeast of Syria and met with several Kurdish, Arab and Syriac figures, and extended an invitation to the representatives of these components in the SDF-controlled area to visit the Elysee Palace in Paris to discuss the Syrian situation. The visit was followed in mid-April by a similar visit to Qamishli by a French Foreign Ministry delegation. French President Emmanuel Macron had welcomed in April 2019 an SDF delegation and declared offering financial support to cover the humanitarian needs and ensure the stability of the social and economic situation in Syria.

In this context, a member of the Kurdish National Council told Al-Monitor on condition of anonymity, “The parties that received the French invitation during the French envoy’s visit to eastern Syria included the Democratic Union Party [PYD] and the Kurdish National Council. This triggered a political brawl between the two biggest Kurdish political groups regarding the members of the delegation that would meet with Macron."

The source noted, "The PYD is trying to control the delegation, while we are requesting equal representation between both parties. Although the idea of the visit is still under discussion, it has not been approved yet. We are working on developing ties with France through mutual dialogue about different issues of the Syrian situation. We consider France as a friend of the Syrian people with all its components, and it was behind the initiative to resolve the inter-Kurdish disputes two years ago.”

Hasan al-Nifi, an independent political analyst who writes for several local newspapers and lives in Turkey, told Al-Monitor, “The French interest in the northeast of Syria did not appear overnight, but it actually dates back to 2015, since the formation of the SDF, when France was the main supporter of that project. But the Americans at the time managed to keep France out of the equation through their military coordination with the SDF. This coordination culminated in an alliance, when Washington decided that the SDF would be its executive arm in the fight against the Islamic State."

He said, "Yet France did not steer clear of the SDF but sent 200 soldiers to the Tishreen Dam base south of Manbij, which is controlled by the United States. France tried to justify the presence of its soldiers there and claimed they have scientific and training missions rather than direct combat purposes. France also believed that its presence in that area must be based on solid steps that begin with consolidating the relationship with the popular bases there, which is exactly what France wants through its recent invitation to all components to the Elysee.”

Macron’s invitation to the Kurds to visit Paris reveals France’s intention to compete for presence in the Middle East, after the United States took a step back in some matters. The French moves in northeastern Syria also indicate that Paris is seeking a foothold in the most important area in the country, amid the regional and international rivalry over influence in Syria.

Mostafa Mostafa, a researcher at the NMA Center for Contemporary Research who lives in Azaz in the northwest of Syria, told Al-Monitor, “France was supporting [the option of] toppling the Syrian regime, which it considered an enemy deserving punishment ever since the assassination of late Lebanese Prime Minister Rafik Hariri. But France could not wage single-handedly a military attack to topple the regime. The American stance on it under Barack Obama was disappointing. What’s more, France was not influential in the Syrian conflict because it did not have tools and power among the strong parties operating on the ground — be they armed groups or political or social forces.”

He added, “The recent French step aims at reviving its absent role in a country that is historically known to be one of the French influence areas. Perhaps another reason falls under the Western efforts to pressure Russia, as France is among the countries that are most concerned about Russia’s attempts to reclaim its international status. The return of the Cold War setting and the troubled waters in Europe as a whole will highlight Europeans’ pressing need for American protection.”

Firas Alawi, a France-based Syrian journalist and editor-in-chief of Al-Sharq news, told Al-Monitor, “France wants to bolster its influence in Syria and the only area fit for that geographically and geopolitically is the northeast, because it is on the US’ side in the coalition and the de facto authorities [SDF] there are close to France. Besides the eastern Euphrates area is rich in wealths, and it is promising in the reconstruction phase. France had commercial businesses in the oil-rich areas before the revolution. Since it is against the Syrian regime and Russia, it has no place in Damascus or other regime-controlled areas. And due to its tensions with Turkey, it cannot set foot in northwest Syria.”

He said, “France is trying to capitalize on the return of the US role or the military repositioning of US forces in the Middle East — namely in Iraq and Syria — to replace it. France wants to be a key player in Syria, just like Russia, Iran and Turkey. It does not want to remain on the back burner in Syria. France wants to ensure permanent presence in the region and make up for its dwindling role in Lebanon due to the Iranian influence there. For that reason, it is drawing closer to [Prime Minister Mustafa al-] Kadhimi’s government in Iraq, and it has invited the components of eastern Syria to Paris.”