Orna Barbivai, a retired major general, is taking over one of the most enviable positions in Israel's male-dominated security establishment: head of the Knesset’s Foreign Affairs and Defense Committee. 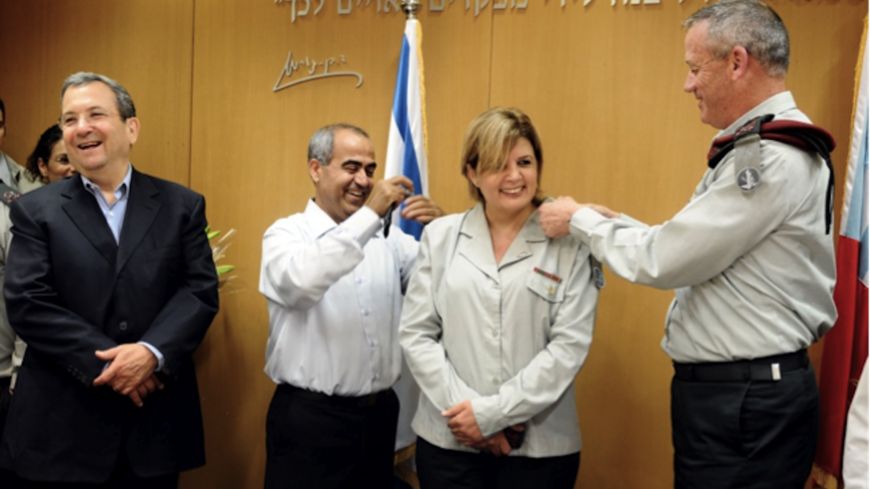 The Knesset made history April 26 by appointing Orna Barbivai as chair of its Foreign Affairs and Defense Committee. Barbivai, the first woman to ever hold the position, is number two on Yesh Atid’s Knesset list after party founder Yair Lapid.

In normal times, Barbivai’s achievement would have been cause for celebration. Her story would undoubtedly have opened all the news shows. But these are not normal times. The political chaos plaguing the country has no end in sight and Barbivai, who was also the only female major general in the Israel Defense Forces, has been forgotten in the confusion.

The story received minimal coverage, though women’s groups and women Knesset members have congratulated her. Her appointment is a big step in rectifying the dearth of women in key political positions, particularly the security cabinet.

Barbivai, a 58-year-old mother of three, will assume one of the most enviable positions in Israel's male-dominated security establishment. Not only have only men headed the prestigious committee in all 73 years of Israel’s existence, for years women did not even serve as regular members of the committee.

“It’s hard to believe that it took 24 Knessets to reach the point where a woman serves as head of the Foreign Affairs and Defense Committee. It is especially exciting now, because you were chosen, Orna, not because you are a woman, but because of your experience and abilities. Everyone around the table is sure of this. I am sure that you will lead the committee forward in contributing to the State of Israel, its security and its foreign relations,” said Knesset speaker Yariv Levin in congratulating Barbivai. Levin is a member of the Yesh Atid party’s rival, the Likud.

Barbivai served in the IDF for decades. She is now filling the shoes of former chiefs of staff like Shaul Mofaz and Gabi Ashkenazi, and former Shin Bet head Avi Dichter.

The Foreign Affairs and Defense Committee is perceived as a secretive group that oversees the most important organizations involved in defending the country. They include the IDF, the Shin Bet and the Ministry of Foreign Affairs.

The committee also oversees their vast budgets. Israel may have one of the strongest militaries in the world, but faces existential threats like the Iranian nuclear program. It is impossible to understate the body's importance.

The committee meets even when the Knesset is not in session, as it is responsible for drafting legislation involving foreign affairs and defense, supervising the relevant ministries and approving the budgets of the Ministry of Defense, the Shin Bet and the office of the prime minister. The committee also approves a wide range of secondary legislation pertaining to security such as emergency call-up orders, special activities by the Shin Bet, conscription of equipment in times of emergency and home front preparedness.

The group receives regular briefings from such senior officials as the prime minister, foreign minister, defense minister, chief of staff, directors of the Shin Bet and Mossad, head of intelligence and head of the National Security Council. The committee is empowered to subpoena any of these people.

Because most of its meetings are held behind closed doors, some even classified as top secret, members of the committee must sign a non-disclosure agreement.

The Foreign Affairs and Defense Committee's far-reaching authority means various activities pertaining to emergency situations must be brought to it for approval such as calling up the reserves under an emergency order or the declaration of a “special situation” on the home front. The government must report to the committee about launching a war or engaging in activities that could lead to war.

The committee also conducts hearings before appointments to top positions in Israel’s foreign affairs and defense establishment. While the committee is not authorized to reject candidates, it can issue warnings about potential obstacles.

Barbivai is entering the position at a particularly challenging juncture. It is very possible that there will be a change of government and the security cabinet will include new people with little experience, making oversight even more important.

“We cannot ignore the security situation along the borders and within Israel itself. We are being challenged by Hamas. It is obvious that the communities surrounding the Gaza Strip cannot continue like this. No matter how we act, it will be cautiously and responsibly,” said Barbivai at her first session as chair last Monday. She added, “Everyone here represents political interests. Nevertheless, I want to believe that we will all see security matters and foreign affairs as transcending our political differences. Israel’s security must stand above all debate.”

On taking charge of Israel’s most exclusive men’s club, she said, “It is an honor to reach this position. I served in the IDF for 34 years. As a woman I believe that this is an opportunity to tell others watching us that there is no job that a woman cannot do. I am glad that this evening, I am breaking yet another glass ceiling.”