The latest killing of a Christian man in Sinai by the Islamic State has brought back to Egypt's Christians memories of past attacks on churches by the terrorist group, even as the Coptic Orthodox Church appeared defiant. 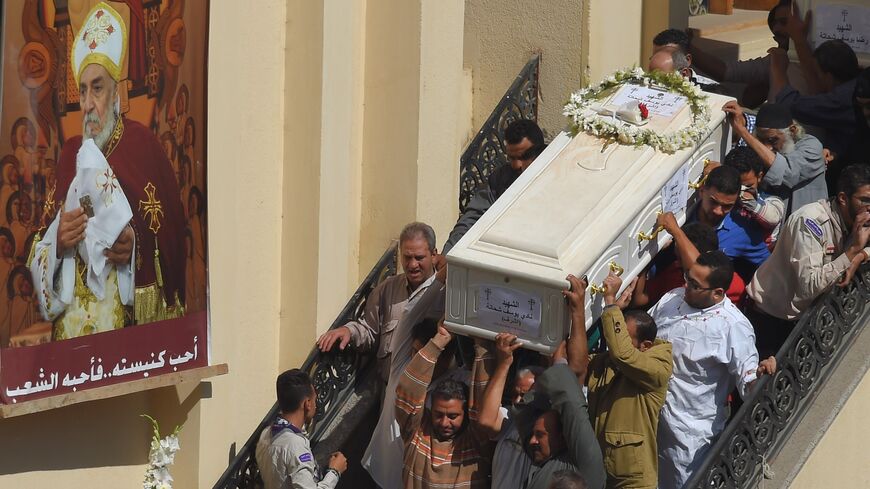 The Islamic State recently released a video of the killing of a Coptic Christian in northern Sinai. Here, on Nov. 3, 2018, Coptic Christians carry the coffin of one of seven victims killed in an Islamic State attack a day earlier, following a ceremony at the Prince Tadros church in Egypt's southern Minya province. Gunmen had attacked a bus carrying Coptic Christians who had visited the St. Samuel monastery. - MOHAMED EL-SHAHED/AFP via Getty Images

CAIRO – Fear is reigning among Egypt's Christians following the killing of a coreligionist by a branch of the Islamic State (IS) in northern Sinai.

Nabil Habashi was shot and killed by IS Sinai after the terrorist organization accused him of collaborating with the Egyptian army and police fighting its militants in Sinai.

IS Sinai posted a 13-minute video April 17 in which it shows Habashi's killing, reviving fears among Egypt's Christian minority of a potential new wave of attacks against them.

"These incidents incite fears among the Christians, especially in the light of repeated attacks against them by Islamist groups in past years," Christian lawyer and activist Ihab Ramzi told Al-Monitor. "I think state authorities will need to work hard to protect the Christians in the coming period."

Egypt has been fighting IS Sinai, originally a homegrown group that swore allegiance to IS in November 2014. The militant group wants to turn northern and central Sinai — which shares borders with the Palestinian Gaza Strip and Israel — into an IS province.

The group used to mainly target policemen and army personnel, but in recent years set its eyes on civilians, especially Christians and tribesmen it accuses of aiding the army and police.

In 2017, it scared hundreds of Christian families out of northern Sinai.

IS then declared war on the Christian minority, around 10% of Egypt's population of 103 million.

In December 2016, an IS suicide bomber blew himself up inside a chapel adjacent to a major church in downtown Cairo, killing 25 people.

In April 2017, the group attacked St. Marks Coptic Orthodox Church in Alexandria, only minutes after Coptic Pope Tawadros II led a service inside it. The attack left 18 people dead and 35 others wounded.

IS carried out another attack three hours earlier on the Mar Girgis Church in Tanta, 56 miles north of Egyptian capital Cairo, killing 29 people and wounding 71 others.

Soon after Habashi's killing video emerged, the Coptic Orthodox Church, which is followed by the vast majority of Egypt's Christians, said his killing would make Copts even more determined to join hands with their Muslim compatriots.

Church officials say, meanwhile, that they will not be intimidated by this incident.

"Habashi's killing will make us stronger," the Rev. Moussa Ibrahim, the official spokesperson of the Coptic Orthodox Church, told Al-Monitor.

Habashi, 62 and a jeweler by profession, was kidnapped by a group of militants outside his home in Baer al-Abd, a town in northern Sinai, on Nov. 8. His kidnappers then called his family to demand a ransom of 5 million Egyptian pounds (roughly $322,000).

However, they did not call again. Police then advised Habashi's family to leave the town altogether for fear of further moves against them by the militants.

Habashi was then not heard of until the emergence of the aforementioned video April 17. In the video, he says he was kidnapped three months and a half earlier, which means that his execution might have taken place in February.

He was shown kneeling in front of three militants. One of the militants details justification for Habashi's subsequent killing, mainly his collaboration with the army and contributing funds for the construction of a church in Baer al-Abd. He then shoots and kills Habashi with his machine gun.

A day later, the Interior Ministry said it had killed three members of the cell that killed Habashi and that it was hunting for other members.

The ministry added in a statement that the IS members killed were planning attacks against Christians.

These developments come as Egypt's Christians prepare for their Easter celebrations. Egypt's Coptic Christians will mark Easter this year on May 2.

The same developments also come as the nation's Christians feel empowered politically, having been given a quota in the lists of political parties fielding candidates in the parliamentary elections for the first time in Egypt's history. Egypt is also giving the Christians the right to construct their own churches for the first time as well.

President Abdel Fattah al-Sisi takes personal responsibility for the protection of the Christians, especially after they fell out with Egypt's Islamists.

Hundreds of Christian churches were burned down following Morsi's ouster.

"These terrorist groups usually target those who are different from them, either in faith or in political orientations," Islamism expert Muneer Adeeb told Al-Monitor.

"The Christians can also be paying the price of their support to Sisi, but we have to remember that these groups do not target the Christians only."

Churches attacked by the Islamists following Morsi's ousting have been restored.

Apart from sanctioning the construction of churches, Sisi also ordered his government to build a church in each new city. In January 2019, he opened his country's largest church in the new capital his government is building in the desert.

Nevertheless, Habashi's killing attests to a change in IS Sinai's tactics, one in which the terrorist organization focuses on weak targets in its bid to prove that it is still present, security analysts said.

"The group selects weak targets only to prove that ongoing counterterrorism operations in Sinai have done nothing to weaken it," security expert Gamal Eddine Mazloum, a retired army general, told Al-Monitor. "However, the same targets prove that the group is on life support."

In Habashi's killing video, IS shows the killing of two young tribesmen whom it accuses of collaborating with the army.

In other parts of the video, the militant group exhibits its record of recent months — attacks on civilians, some of them unarmed.

The Egyptian army launched an all-out operation against IS in Sinai in 2018. Codenamed "Operation Sinai," the operation involves air and ground troops, along with the Egyptian navy.

To defeat IS, Egypt moved tens of thousands of ground troops from the area west of the Suez Canal and into Sinai, together with heavy equipment, for the first time since signing the Camp David Accords with Israel in 1978. An annex to the accords bans the presence of significant Egyptian forces in northern Sinai.

In 2017, Sisi said that 41 battalions (over 40,000 troops) were moved into Sinai to fight IS and preserve security there.

"The Egyptian counterterrorism strategy in Sinai is having real successes," Mazloum said. "This is manifested in the number and the scope of the attacks the terrorist group is able to launch."