The Muslim Brotherhood and sources close to the Turkish government are arguing that Saudi Arabia could find a face-saving exit from the Yemen conflict it has been looking for by cooperating with Turkey. 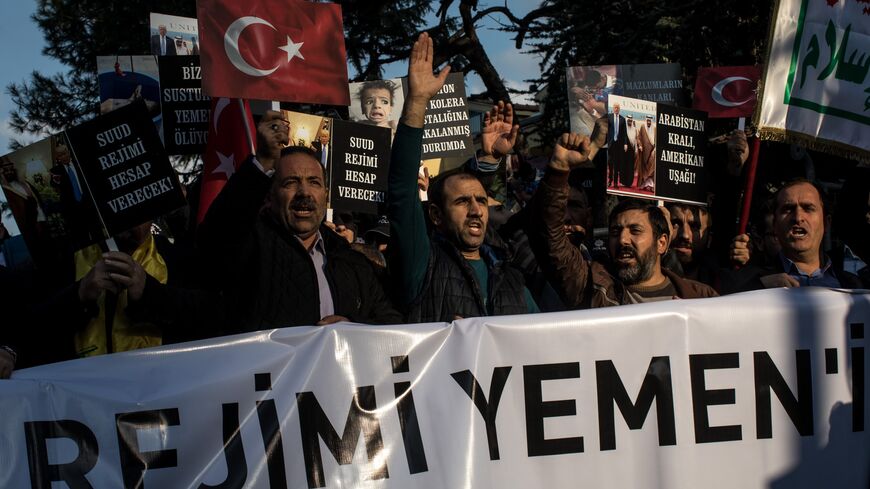 Could Turkey help out Saudi Arabia in Yemen? Just 28 months ago, as seen here on Nov. 11, 2018, Turks were chanting slogans and holding posters in protest of Saudi Arabia's actions in Yemen outside the Saudi Consulate. The October 2018 murder of journalist and Saudi critic Jamal Khashoggi inside the consulate had helped push attention to the war in Yemen. - Chris McGrath/Getty Images

In part as a result of the Biden administration’s shifting policies toward Iran and Washington's decision to temporarily freeze and review weapons sales to Saudi Arabia over the Yemeni war, Ankara is aiming to turn Saudi Arabia’s growing international isolation to Turkey's advantage.

Some Syrian opposition sources claim Turkey might transfer Syrian fighters to Yemen to fight alongside the Saudi-led coalition against the Houthi rebels. The immediate interpretation of these claims might be that Turkey is extending an olive branch to Saudi Arabia following a yearslong frostiness in relations.

The second interpretation might be that Ankara is signaling to Tehran Turkey's disgruntlement over Iranian military activities in Iraq and Syria. Iran believes Russia made too many concessions to Turkey on Syria and has overtly expressed its opposition against Turkish military operations in Iraq, prompting diplomatic bickering between Ankara and Tehran.

Possible Turkish involvement in the Yemeni war might provide Saudi Arabia the face-saving exit from the conflict that Riyadh has been looking for. Reportedly, Turkey’s support might also include Turkish armed drones that have been game changers in the Libyan and Azeri-Armenian conflicts.

The Yemeni Al-Islah Party — the Yemeni branch of the Muslim Brotherhood — has been asking Turkey to step into the fray. However, the United Arab Emirates has long opposed the Al-Islah Party’s cooperation in the conflict, while Saudi Arabia has only reluctantly accepted cooperation to date.

Saudi officials have reportedly been advised to improve ties with Turkey after a chilliness with the Biden administration developed as a result of the administration's positive messages on the Iranian nuclear deal, the release of a CIA report exposing Saudi Crown Prince Mohammed bin Salman’s role in the Jamal Khashoggi murder and the decision to lift the Houthis from the US list of foreign terrorist groups. The pro-government Turkish media has also trumpeted a narrative that Riyadh "desperately needs" Turkey.

While the idea of sending Syrian fighters to Yemen may be mere speculation, there have been a number of claims about the matter. Citing a source from the Syrian armed group Sultan Suleiman Shah, the North Press Agency reported that the Syrian National Army, a rebel group backed by Turkey, “has been working for weeks to prepare dozens of militants to send to Yemen.” According to the report, fighters have been offered salaries up to $2,500 a month and were told they were going to be positioned on the Yemeni-Saudi border and not participate in the clashes. It's worth mentioning that Syrian fighters who were sent to Azerbaijan had also been told that they did not have to participate in the fighting, only to find themselves on the front lines.

Similarly, the Violations Documentation Center in Northern Syria said Turkey's intelligence agency assigned an opposition commander to recruit fighters to be sent to Yemen. According to the report, the fighters were offered $2,500 monthly; $100 of this amount would be deducted for document expenses, fighters would receive $400 in cash initially and the remaining $2,000 would be paid to their families after the move to Yemen.

Journalist Lindsey Snell shared a voice recording that reportedly belongs to a Sultan Murad Brigades commander in which he seeks identification documents from his fighters who “wish to go to Yemen.” Snell said in a tweet accompanying the recording, “This happened in the couple weeks before Azerbaijan, too.” This was in reference to the transfer of Syrian fighters to the Azeri-Armenian conflict. Social media is abuzz with similar claims.

Yet Saudi Arabia acquired these drones as part of a contract worth $200 million that Vestel Defense signed with Riyadh last year. According to the Saudi General Authority for Defense Industries, Riyadh is aiming to build up to 40 armed drones in five years, with six of them planned to be built in 2021.

Despite rife speculation, there is no official confirmation that Baykar Makina, the manufacturer of the Bayraktar drones used in Libya and the northern Caucasus, will play a role in the Yemen conflict.

According to the London-based Al Arab newspaper, Turkey, Qatar and the Muslim Brotherhood network are relying on increasing concerns of the Saudi side following the US policy shift on the Yemeni war and Houthi rebels’ advances toward the oil- and gas-rich Marib region. The newspaper said the first call for Saudi-Turkish cooperation in Yemen came from one of the Al-Islah Party leaders who lives in Istanbul. Hamid al-Ahmar told Al Jazeera that Saudi Arabia turned to Turkey for advanced weapons after the US weapons freeze.

The UAE, like Egypt, is insisting that Turkey should cut its support to the Muslim Brotherhood to mend relations with Abu Dhabi. However, the Emiratis’ diminishing support for Khalifa Hifter in Libya and its decision to pull back from a military base in Eritrea that was key to Yemeni operations could be a manifestation of a downgrade in the UAE's regional ambitions.

Muslim Brotherhood groups’ desire to draw Turkey into the Yemeni conflict, meanwhile, seems quite clear. Al Jazeera commentator Faisal al Kasim trumpeted that the balance of power on the ground in Yemen would change as soon as “Turkey has started to step into the Yemeni file.” Turkish-based Egyptian journalist Jamal Sultan claimed that Turkish-built Bayrak drones were spotted in Yemeni skies.

Pro-government Turkish media outlets sing a similar tune. The Yeni Safak daily, a governmental mouthpiece, claimed that Saudi Arabia was left alone in the Yemeni conflict. “Saudi Arabia has lost its fear of Turkey,” the paper wrote, “Turkey is the only country that could save Saudi Arabia from the mess it is in.”

Burhanettin Duran — a member of a foreign policy board advising the president and head of the pro-government think-tank SETA — argued that Gulf policies to restrain Iran and Turkey have failed. The Saudis “now need Turkey to fight off Iran’s expansionist policies in the region including in Yemen,” according to Duran.

The Iranian media also appears to take claims of Turkish involvement in the Yemen conflict seriously. Iran’s official news agency IRNA reported that Saudi authorities have decided to put aside differences with their Turkish counterparts to cooperate with Ankara on the Yemen file.

Although mutual Turkish Saudi interests could spell a new beginning in Ankara-Riyadh ties, the lack of any official acknowledgment is an indication of reluctance and caution on both sides. Defusing a confrontation of some seven years between Turkey and Arab countries requires comprehensive consideration as the “Arab skepticism” that was fanned by Turkey’s expansionist ambitions in the region still is in play and appears to shape Arab countries’ approach to Turkey.