Prime Minister Benjamin Netanyahu is trying to compose a majority-backed government, but he's also preparing to fight as leader of the opposition. 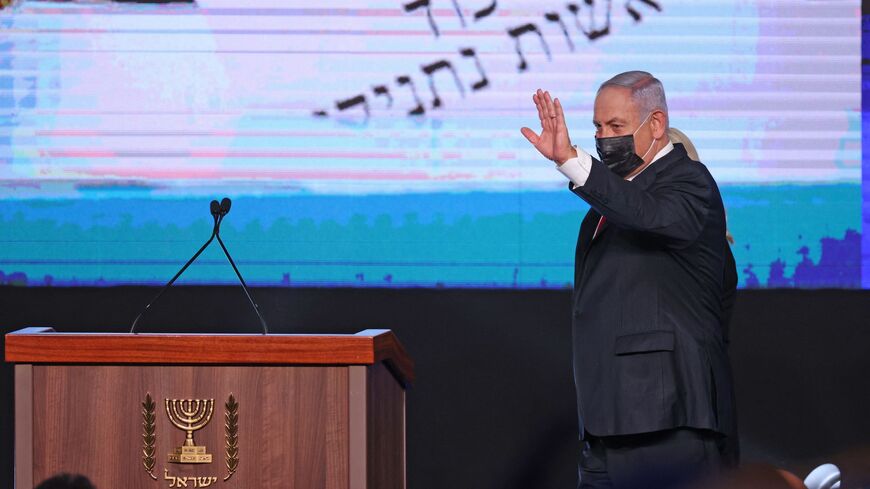 Israeli Prime Minister Benjamin Netanyahu waves to supporters at the Likud campaign headquarters in Jerusalem on March 24, 2021, after the end of voting in the fourth national election in two years. - EMMANUEL DUNAND/AFP via Getty Images

Prime Minister Benjamin Netanyahu is not celebrating today. President Reuven Rivlin tapped him this morning to form the next government, but Netanyahu knows that the task is going to be complicated, perhaps impossible. Rivlin himself said at a press conference, "I am under the impression that none of the candidates have a chance to form a coalition."

Netanyahu now enjoys the endorsement of 52 Knesset members. His difficulty will not only be gathering 61 of them to support him and form a stable coalition. He will also have to thwart efforts by Yesh Atid leader Yair Lapid and Yamina leader Naftali Bennett to form their own coalition.

On April 4, the day before the president consulted with representatives of the various parties, Netanyahu held an emergency meeting with some of the people closest to him. The mood was of defeat. Earlier this month, Israel’s political leader marked 12 consecutive years as prime minister, but the anniversary was bittersweet.

In the meeting, Netanyahu told his associates he had received information indicating that the anti-Netanyahu bloc had already agreed to form a coalition to replace him. It would be a rotation government headed first by Bennett and then by Lapid. Netanyahu explained that during consultations in the president’s house the following day, his opponents would recommend one of the two.

Things developed a bit differently. By the evening of April 5, Lapid was endorsed by only 45 lawmakers. Bennett had recommended himself and the other 16 legislators recommended no one.

Netanyahu now finds himself in a strange spot. He may have won 30 seats in the last election — far more than any of his rivals — but the election was not conclusive. The president had handed him the mandate for composing the government, but it may not be enough.

Since the March 23 elections, Bennett and New Hope leader Gideon Saar have been working together in the talks to form a new government. In order to convince Bennett to abandon the right, Lapid had offered him a chance to serve first as prime minister in a rotation government. That scenario is unprecedented: a candidate who won just seven seats serving as head of a coalition made up of parties on the far left, an Arab party and supporters of the ideological right.

Still, that scenario has not yet materialized. Bennett had a long meeting with Netanyahu on the night of April 3, reportedly with good results. Netanyahu offered him the world on a silver platter if only Bennett would agree to join him. Bennett then recommended himself for composing the next government.

Al-Monitor learned from an associate of Netanyahu that the prime minister told Bennett that if he does become prime minister, Netanyahu plans to remain on as head of the opposition. Should that happen, he will be sure to bring down Bennett’s government.

A Likud minister told Al-Monitor recently that however things unfold, Netanyahu does not plan to give up leadership of the party. Speaking on condition of anonymity, the minister said, “If things come to that, we’ll go to the opposition benches, headed by Netanyahu, and we will make their lives miserable. Does anybody really think that Bennett can control the leftist and Arab members of his coalition when his entire agenda is rooted in right-wing nationalism? We will humiliate him day after day. The deal he makes with the other parties will soon fall apart.”

Netanyahu has said before that he made a mistake when he decided to resign as leader of the Likud after Ehud Barak defeated him in the 1999 election. It took him a decade to return to the prime minister’s office. He will not let it happen again.

Netanyahu will do whatever it takes to compose a majority coalition, applying pressure on Bennett from the right, his own Knesset members and the electorate that still identifies with him.

But Netanyahu also has a backup plan in case the president offers the mandate of composing a government to another candidate. In such case he will continue to be the unchallenged leader of the right, but from the opposition benches. He will have the support of the entire Likud as well as the ultra-Orthodox parties and the far-right Religious Zionist Party headed by Bezalel Smotrich. The four seats held by Raam chair Mansour Abbas could, under certain circumstances, give Netanyahu the boost he needs.

Looking at the big picture, it becomes rather obvious that we are living through a shift of enormous historical significance. These are the kinds of times that will determine the character of the State of Israel and the balance of power within it. Netanyahu is facing a trial that could last years, but his popularity has hardly suffered. As leader of the opposition, he will be fighting against a new and inexperienced government that is ideologically polarized. Under such circumstances, support for Netanyahu can be expected to grow.

Netanyahu is the phoenix of Israeli politics and the right's most significant leader of this generation. As the son of a prominent historian and someone with a strong sense of history himself, he must realize the importance of his role. He will stay in it as long as he can.