In his prime-time speech, Arab Knesset member Mansour Abbas cleverly laid the groundwork for an Arab party to join it. 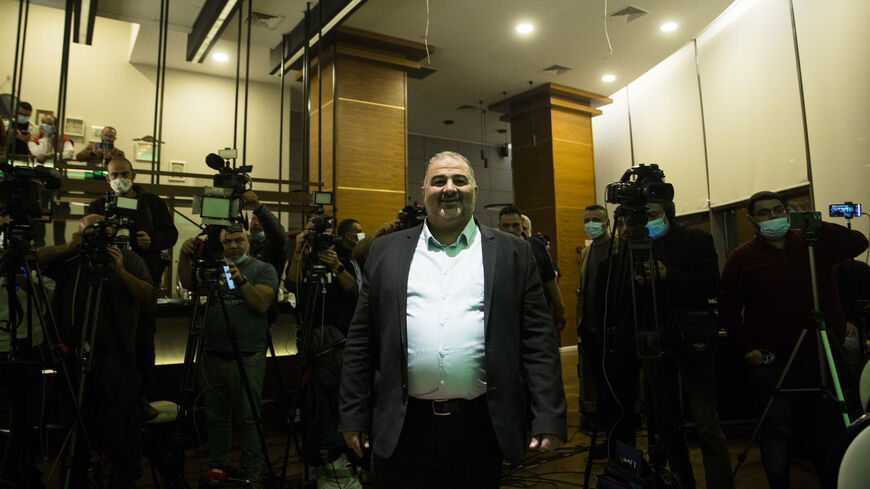 Mansour Abbas, the head of the United Arab Party (Raam), arrives to deliver a speech on April 1, 2021, in Nazareth, Israel. - Amir Levy/Getty Images

A marathon of consultations at President Reuven Rivlin’s residence in Jerusalem began the morning of April 5. All the parties elected to the 24th Knesset are meeting with Rivlin to give their recommendations as to which legislator has the best chances of forming a new government and winning the Knesset’s approval. The first party to meet with Rivlin this morning was the Likud, the largest one. The smallest, Raam, should meet with Rivlin this evening. Each meeting is open to the media and broadcast live to the public, in keeping with the president’s directive to act with full transparency.

The man in the spotlight is, undoubtedly, Knesset member Mansour Abbas, head of Raam. As of this writing, he is known as the “kingmaker” of Israel’s 2021 election, since his party has yet to announce its preferred candidate.

It is possible that the party will not recommend any candidate. April 1, all of Israel focused on Abbas' speech at the Ramada hotel in Nazareth that was broadcast live on radio and television. Abbas made a point of not naming his choice.

Addressing all Israelis, he said, “I, Mansour Abbas, a man of the Islamic Movement, am a proud Arab and Muslim, a citizen of the state of Israel who heads the leading, biggest political movement in Arab society, courageously champion a vision of peace, mutual security, partnership and tolerance between the peoples.”

He went on, “We don’t have to agree on everything. We will obviously differ on many issues, but we must give ourselves and our children the right and opportunity to come to know our neighbors. Every one of us has a name, a culture, a story, experiences and a narrative.”

Addressing those opposed to the inclusion of an Arab party in the government and in politics in general, he warned, “If we cannot find the way to defeat ignorance and beat racism, we will bequeath to the next generation a complex and dangerous and impossible reality.”

He was clearly extending a hand to the other side, laying the groundwork for an Arab party to enter the political game. Raam will not be satisfied with sitting in the plenum and wants to play the game like everyone else. Obviously, there is no more veto by Jewish parties on the full participation of Arab parties. Their past exclusion will not happen again.

With his prime-time tv slot and visionary language, Abbas' speech marked a historic moment. While Arab citizens are already part of the legislative and judicial branches of government, they are entirely absent from the executive branch. Now, for the first time in Israeli politics, he had brought the change so longed for by his electorate. Now everyone will remember him as the person who integrated Arab citizens into the inner circle of Israel’s decision-makers.

Abbas stressed, “I don’t want to be part of any political bloc — right or left.” Still, the prevailing assessment in Israel was and is that Abbas would prefer to join forces with Prime Minister Benjamin Netanyahu despite all the bad blood between the prime minister and the country’s Arab citizens and even the far-right politicians like Bezalel Smotrich and Itamar Ben Gvir from the Religious Zionist party solidly entrenched in the Netanyahu camp. Apparently, some Raam members believe that the advantages of supporting Netanyahu outweigh the disadvantages, even in the long term.

The first of these advantages would be the endorsement of the man who incited more than anyone else against the Arab population. Should he invite the party to join his new government, there will be no excuses not to embrace Arab parties in the future.

Secondly, if Raam does join a Netanyahu government, the Joint List will have no influence on the government. In a center-left coalition, the Joint List could join or support from the outside. Should Raam join the Likud, Abbas will be solely responsible for any benefits to the Arab public.

Third, once the Netanyahu era is over, the ultra-Orthodox parties might start playing a wider political field. Should that happen, Raam or any other Arab party could be sent back to the Knesset backbenches. After all, any future prime minister would likely prefer a coalition with the ultra-Orthodox over one with the Arabs. The time to act is now.

The is no doubt that Abbas’s remarks do not represent the sentiments of the entire Arab population. Opinions about him are mixed. Kafr Kassem's Mahmoud Frej, who supported Abbas in the election, told Al-Monitor, “It was a brilliant speech. Raam has reached the conclusion that the options are either a fifth round of elections or a government headed by Netanyahu and supported by them. This means that Netanyahu will have to decide whether to approach Abbas directly, which he has not done yet, or announce another election, which would be a nightmare for him. Abbas is taking advantage of this situation to maximize his benefits.”

But others oppose Abbas' strategy. Young activist Yanal Jabareen told Al-Monitor, “I’m opposed to the Abbas speech. He is trying to whitewash his support for a government headed by Netanyahu. I draw the line there. I have principles. Under no circumstances will I abandon my national identity as a Palestinian. Sadly, Abbas abandoned that in his speech. Furthermore, it is important to oppose any measures that would grant legitimacy to [far-right Meir] Kahane supporters, whose platform advocates the transfer of the Arab population out of the country.”