Arab-Israeli Nas Daily has become one of the most influential internet personalities in the world. 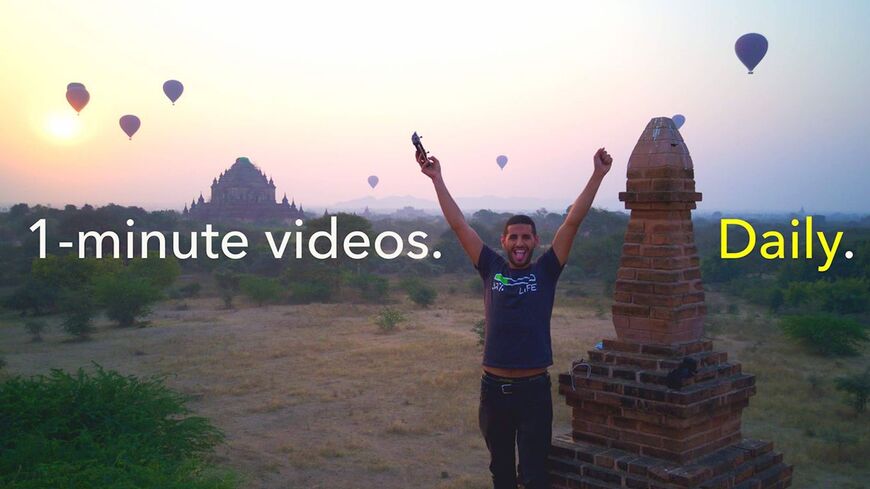 Nusseir Yassin is one of the most famous Israelis in the world. He is the product of two cultures, Israeli and Palestinian.

Yassin, 29, is from the Arab town of Arraba in the Galilee. He left his hometown and went to Harvard University, then spent about two years working in high tech as a developer, but felt called to set out and conquer the world.

He left his job in 2016, got a high-quality video camera, packed his backpack and went out to explore the world and show everyone at home the world through his eyes. He chose to present his findings through a character he created, Nas Daily, on Facebook.

By his own admission, part of his enormous motivation stems from his anger and frustration toward the country in which he was born and its institutions. Nevertheless, one of his main goals is to be popular with Israelis, even if he has distanced himself from them physically.

“Nas” means "people" in Arabic. In colloquial speech, it refers to the people we come across every day. He makes a point of describing them, the ordinary people in the streets, fields, and villages all around the world. He makes short films and releases one every day. Over the past three years, he has produced about 1,000 such films, visited 64 countries and gathered 36 million followers and 13 billion hits. He has spread to other social networking platforms and now has popular accounts on YouTube, Instagram and TikTok.

Ynet, a popular Israeli website, selected him as one of its “Best Israelis in the World,” calling him brilliant, opinionated, critical and fearless. It also noted that he is a "Muslim, an Israeli and a humanist."

Today, Nas is considered one of the most influential internet personalities in the world. Despite his trademark positive energy, in an interview with Ynet he admitted that anger was and remains one of his main motivators.

“I was very fortunate to be born in Israel. On one hand, it is a curse, but it is also a blessing. I learned a lot from it. I learned about the concept of democracy, about the principle of expressing one’s self freely, about scientific developments, the constant search for new discoveries, and the promotion of startups. … I think that being a Palestinian in Israel opened my eyes to the other side and fostered a sense of empathy.”

He really wants to be liked by Israelis, and they love him. “I think that what Israelis are sometimes lacking is a partner, i.e., someone on the other side who understands their problems and needs and aspirations. That’s the idea behind Nas Daily. I’m not here to take the side of the Palestinians, and not the side of the Israelis either. … There are so many Jews who don’t have any Arab friends. They don’t hear what they have to say. There is no interaction between them. That’s why it makes me happy, for example, to imagine an Israeli soldier sitting in the bathroom, doing his business, and turning on his smart phone to watch a Nas Daily video. He’ll say to himself, ‘Wow! This guy isn’t bad. Whoa! Maybe all the Arabs aren’t terrorists after all. Maybe that’s just an idea that people put in our heads.’ That’s the ultimate goal, as far as I am concerned, which is why I want to address Israeli society more.”

Nas defines himself as a citizen of the world. “We’re not robots. I think that people need to stop thinking that they need to live and die and own their own property along the way. They need to realize that there is so much space in the world, and that there are plenty of opportunities in every country. I think that what we are missing, especially in Israel, is a global worldview which includes Arabs and Jews.”

He travels a lot, though he has two main bases: one in Dubai and the other in Singapore, where he set up his business center and video production company. Dubai allows him to maintain a connection to the Arab world from which he comes as well as an international and advanced landscape.

Last October, Al Jazeera criticized Yassin, saying that behind his tolerance-promoting initiative is a collaborator funded by the Israeli government. In response, Yassin produced a scathing but amusing video titled, “Watch out for Al Jazeera.” In it, he spends over five minutes laying out his arguments against the misinformation being spread about him by the Qatari network, reminding his many millions of viewers that Al Jazeera is actually funded by the Qatari regime and describing how it speaks in two voices: a liberal voice that speaks to a Western audience in English, and a conservative voice that broadcasts to an Arabic-speaking audience in the Middle East.

When asked what advice he would give to young people, he said, “Find out what’s acceptable to the people around you — and do the exact opposite. In most cases, you’ll win.”

Nas knows, because he’s about to win. The company he started is about to announce that it has raised $10 million from supportive investors, including Jews from Israel.