Popular ultra-Orthodox movies, created by ultra-Orthodox women for all-female audiences and screened for only two weeks each year, are still not conservative enough to maintain the entire sector's support. 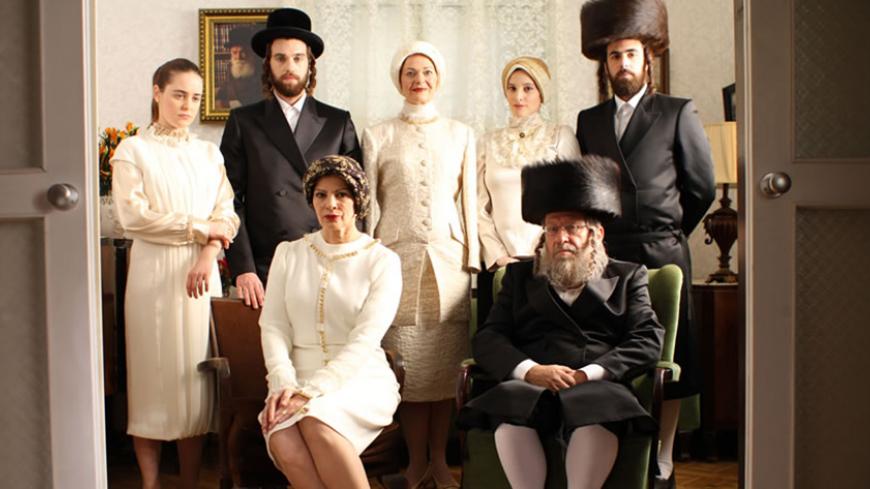 The cast of "Fill the Void" (2012), a film by ultra-Orthodox filmmaker Rama Burshtein, poses for a promotional image. The film tells the story of a girl pressured to marry her older sister's husband after the death of her sister in childbirth. - sonyclassics.com/fillthevoid

Twice a year, during the holidays of Passover and Sukkot, the public bulletin boards that line Israel’s ultra-Orthodox neighborhoods undergo a dramatic transformation. A colorful, eye-catching set of posters pops up alongside the ubiquitous black-and-white death notices. These posters announce special screenings of a wide range of films over the course of the two weeklong holidays. The mainstream ultra-Orthodox press also promotes these films, which are shown in municipal community centers, synagogue halls and schools.

These films are unique in Israel, and perhaps the entire world. The cast consists entirely of women, as does the audience, and the writing and directing is almost completely done by women, too. The plots do not deal with tangled romances or crime. They are mostly family and historical dramas or comedies of various sorts.

Films like "Fill the Void," made by ultra-Orthodox filmmakers about their communities, have been screened in cinemas and festivals around the world. In contrast, these Israeli films by and for women are produced by a shadowy industry and are not marketed outside the ultra-Orthodox community. The industry does not receive any funding from Israel’s various film foundations and the films do not participate in competitions. Nor are they sold on DVD. It is almost impossible to find pirated copies of them online.

​Al-Monitor spoke to a non-ultra-Orthodox video editor who has worked on quite a few of these films for ultra-Orthodox directors. The editor, who asked for anonymity, said, “There are two reasons why these films receive no exposure outside of ultra-Orthodox circles. First of all, I don’t think that the plots meet commonly accepted cinematic standards. Second, [the cast members] speak in very ultra-Orthodox language. As an editor who has seen just about everything, even I don’t always understand the nuances.”

The economics of these films is one of the biggest challenges facing ultra-Orthodox filmmaking. As far as the producers are concerned, they are a kind of financial roulette. “Failed films have caused enormous financial damage to their producers. Some of them were even forced to sell their apartments and declare bankruptcy,” said Wennig.

There have been several attempts over the past few years to cast men in ultra-Orthodox films, but all of them have failed. Wennig describes how attempts to include men on the set ultimately resulted in much smaller audiences. “Over the past few years, several ultra-Orthodox directors tried to incorporate male actors, but women voted against that with their feet. Ultra-Orthodox women have fallen in love with films featuring women only, so it will apparently stay that way,” she said. ''There is no doubt that ultra-Orthodox film is very gender-specific. In that sense, it is a unique phenomenon in the world of film. It is all about women making movies for an exclusively female audience, without the slightest nod to a male audience, even subconsciously. There is something very pure and clean about it.”

While women’s films have entered mainstream ultra-Orthodox society, not everyone is so accepting of the phenomenon. Wall posters denouncing the movies still appear every now and again. The ultra-Orthodox extremist group Edah Haredit, for instance, supports a separatist, isolationist lifestyle and openly opposes these films. A source within the group candidly admitted to Al-Monitor on condition of anonymity that its fight against these movies has failed. “In hindsight, our struggle did not achieve its objectives because it wasn’t vociferous enough from the outset. Now it really is much harder to combat the phenomenon,” he said.

He added, “There are many problems concerning modesty in these films. They present a slippery slope, which can lead in very problematic directions. Anyone who deals with these films knows exactly what we mean.”

Nevertheless, it seems as though ultra-Orthodox cinema is on the verge of a major upgrade of another kind. The various planning committees of the Jerusalem municipality are currently advancing the creation of the Beit Yaakov Center for Performance Arts, which will serve as a kind of home for ultra-Orthodox cinema, theater and dance, as well as for art galleries. The institution is expected to do much to formalize theater arts among the ultra-Orthodox sector.

“If anything can turn performance arts in the ultra-Orthodox community into a stable and genuine institution, it is this,” said Wennig, who is pleased by this development. “It will establish a canon and change the habits of consumption. For the first time ever, ultra-Orthodox culture will be available throughout the year, not just on holidays. Ultra-Orthodox women will be able to go there to watch movies.”

Nevertheless, she makes it perfectly clear that she does not think such an institution will have any influence whatsoever in opening the ultra-Orthodox community to the wider world. “On the contrary,” Wennig was careful to emphasize, “an institution such as this will only bolster ultra-Orthodox autonomy. For many ultra-Orthodox Jews, it will send a message that you can love the stage and still remain ultra-Orthodox.”