The path of democracy will influence the future of the Turkish film industry. 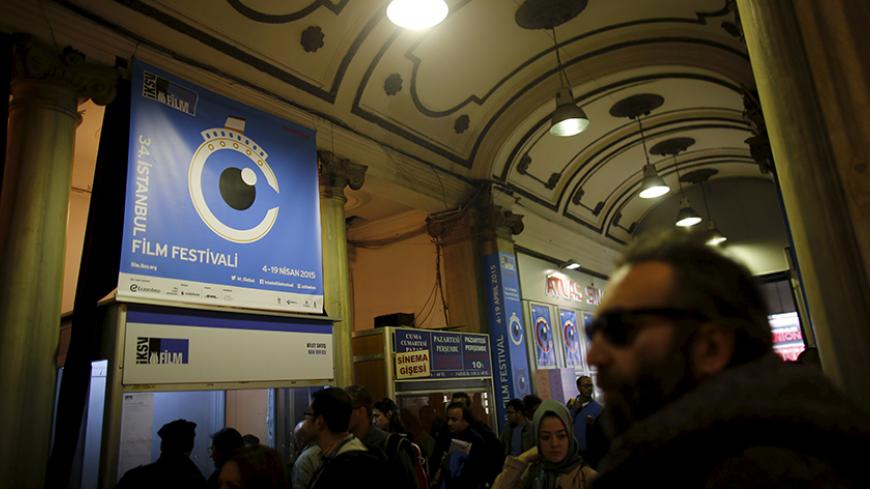 People line up to buy tickets for the Istanbul Film Festival at the Atlas Movie Theater in Istanbul, April 14, 2015. - REUTERS/Murad Sezer

According to the latest 2015 cinema report by Antrakt, an independent film market intelligence company, a total of 60.4 million movie tickets were sold in Turkey in the last year. Ticket sales for locally produced films were 57%, while foreign films earned 43% of the total. Though the number of admission tickets was 2% higher in 2014, the report shows more than 1 billion Turkish lira ($332.3 million) in revenue from tickets in the past two years. Local films brought in 361 million Turkish lira, more than half of the total revenue of 681.4 million Turkish lira, an all-time record.

One of the distinguishing characteristics of the Turkish market is the popularity and success of local films. In 2015, the number of locally produced films was also the highest ever. In the period between 1990 and 2004, the rate of Turkish production films never passed 37% of the total number of sold tickets, but after that, the numbers only fell below 50% in 2005, 2007 and 2012. Moreover, the Antrakt report clarifies this striking increase in local production: Between 1990 and 2007, there were about 40 locally produced films; in 2014, that number was 107, and last year 134 local films were made. Notably, there were also 137 shot and ready films that never found a distributor last year, so more than 100 films are waiting for their showing rights now.

Astonishingly, 40 locally made films have already taken a place in the 2016 calendar, and about 400 projects are currently in the scenario-writing phase, on set or in postproduction. Out of 286 shown foreign films, 140 were made in the United States, followed by films made in Europe.

Remarkably, Turkish films that achieve great success internationally don’t do as well in Turkey. For example, 304,782 people saw Nuri Bilge Ceylan’s “Winter Sleep,” the winner of the Cannes Film Festival's top award, the Palme d'Or, in 2014. Emin Alper’s film “Frenzy” (“Abluka” in Turkish), winner of the Special Jury Prize at the 72nd Venice Film Festival, was seen by 16,000 in Turkey. Turkish female director Deniz Gamze Erguven's debut feature “Mustang” — a French movie — was listed among the Oscar nominations for best foreign film. It was seen by 17,500 in Turkey.

On the other hand, according to Box Office Turkey, local blockbuster comedy “Dugun Dernek 2: Sunnet” (“Wedding Feast 2: Circumcision”) entered theaters on Dec. 4, sold 5.8 million tickets and cashed in 67.2 million Turkish lira. Hurriyet newspaper film critic Ugur Vardan explained that one of the reasons for the movie’s huge success is its timing. “Turkey is a country of an always busy, depressive agenda,” he said. “Laughter is the best solution for such situations, and most of the time, the cure is comedy films.”

More broadly, one of the reasons for the increase in ticket sales in recent years could be better, more modern infrastructure. Today, there are 625 halls in Turkey in which films can be screened. Since 2014, more than half of all movie theaters have been equipped with digital screens. In general, there has been an increase in the number of movie theaters as well, with 43 new cinemas starting their services last year, adding 24,213 seats. Still, both digital screen penetration and the number of screens in Turkey remain lower than in the European Union. According to European Audiovisual Observatory’s report from 2014, the cinema-going rate in Turkey is still ranked among the lowest in all of Europe, which suggests a remarkable growth potential.

When it comes to distribution, there are 10 major companies that manage 41% of the top-rated cinemas in Turkey: Cinemaximum, Avsar, Prestige, Pink, Site, Cinemarine, Cinens, Cinetech, Cinetime and Cinecity. Those who criticize this landscape assert that the box office is still monopolized by an oligarchical cult of distributors and producers while alternative, low-budget productions are ignored. Moreover, national film festivals have been subjected to the dire test of censorship.

But while some long for more diversity in film distribution and screenings, others strive for realizing their own business visions. Mars Entertainment Group, a movie theater company that has 29% of the market share in Turkey and which manages the Cinemaximum theater chain, is the most powerful player on the scene. Mars chief executive Muzaffer Yildirim recently said that the film sector today employs more than 100,000 people and that the Turkish market is the fastest growing one after China and Russia. He was honored at CineEurope as international exhibitor of the year in 2013. When explaining the uniqueness of Turkish audiences in Europe, Yildirim said, “Turks are social people, they want to talk in the [cinema] foyer. In other parts of Europe, you see people going to the cinema alone, you never see that in Turkey. It’s not uncommon to see 10-15 people going to the cinema together — not just teenagers, these are also older people who go together to dinner and the movie. Also they have an intermission, to talk, meet, have a cigarette and also buy more concessions.”

Shopping malls that include cinemas, restaurants, boutiques and safe parking have become popular locations for a day of leisure in crowded urban centers in Turkey. Consequently, last year, 245 out of 378 A-ranked movie complexes where films are shown throughout the year were located in a mall. For example, the Akmerkez Cinema Pink movie theater, recognized as the best movie theater of the world by the International Cinema Technology Association in 2015, is located in Akmerkez Mall in Istanbul.

The largest number of movie theater seats, 139,312, are in the western Marmara region of Turkey with Istanbul as its center, while the smallest number are in eastern Anatolia region, 11,454, and Northern Cyprus, 3,105.

At the same time, 155 cinemas were closed in the last several years (not more than five last year). Istanbul’s historic Emek Theater will fortunately reopen in March after a long and controversial renovation. Others, like the SineBu Theater of Bogazici University, expanded their services. SineBu added the necessary infrastructure for screening audio-described films for the blind. One of the visually impaired viewers, Sevda Yilmaz, was quoted in Daily Sabah: “Making films with audio-descriptions should not be a social responsibility but a social obligation.”

While there is much to regulate better in the Turkish film industry, the country’s stability is needed for every sector of the economy. A bad international reputation of a weakened rather than strengthened Turkish democracy will impact development of the film industry. Luring Hollywood filmmakers will never be sustainable, either. A lot more than breaking records is at stake for the development of Turkish cinema as a successful international brand.