A festival in Cairo featuring director Youssef Chahine's films is attracting a new generation, who are commemorating the 10th anniversary of his death. 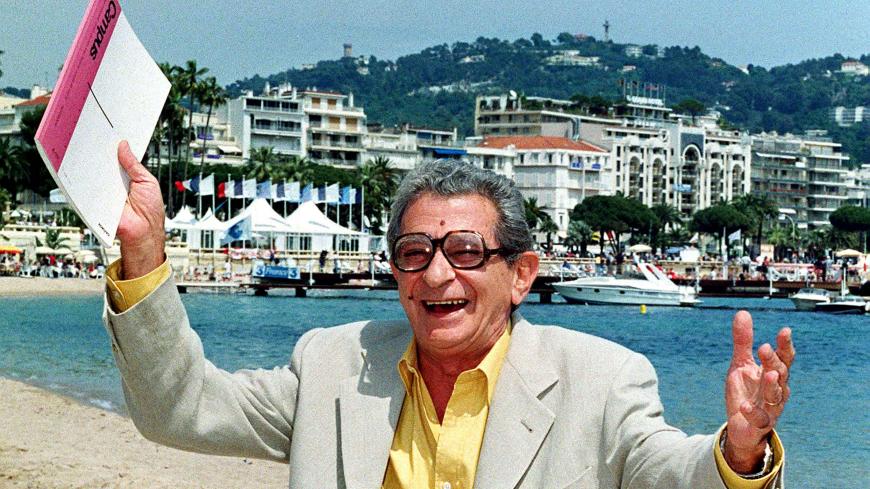 Cairo’s historical Zawya Cinema has been the scene of long queues for the last 10 days since it began screening the restored films of Egypt’s legendary director Youssef Chahine.

An hour before screening began on Sept. 15, more than 400 people lined up in front of the cinema on the upscale Emadeddin Street in downtown Cairo. The film was his 1958 hit, “Bab al-Hadid” (“Cairo Station”); most of the tickets were already sold out.

"If Youssef Chahine were alive today, he would have shed tears of happiness," Ahmed Shehab, a young Egyptian who waited his turn in the long queue, told Al-Monitor. Shehab recalled the big fiasco when the movie first came out in 1958. At the time, some spectators who were displeased with the content of the film went on a rampage and destroyed some movie theaters. The movie, which was about a crippled newspaper vendor’s sexual obsessions, was not shown again for two decades.

Over the last 10 days, Zawya Cinema has screened 22 of Shahin's restored films – an homage to the director who died 10 years ago. Aflam Masr El Alamia, the company that manages Zawya Cinema, restored the films in collaboration with France's Cinematheque, making sure that Shahine's internationally famous films, such as "Al-Massir" (“Destiny”), "Bab al-Hadid," "Al-Ard" (“The Land”), "Adieu Bonaparte" and "Al-Mohajer" (“The Emigrant”), were included.

Zawya Cinema director Marianne Khouri told Egyptian satellite channel OnEnt that they have restored the films by improving the visual and audio quality. "The processes of restoring the quality of the films was troublesome. It is extremely hard to re-create the sounds, which were badly damaged,” said Khouri.

Despite difficulties, the restored films enabled new generations to see the works of Chahine, said Arwa Tageddin, a cinema critic and writer in Al-Film Magazine. Tageddin added, "The event gave new generations an opportunity to rediscover the works of Youssef Chahine on the big screens at high quality and clear sound.”

Chahine, born in 1926 in Alexandria, was the 50th annual Lifetime Achievement Award recipient at the Cannes Film Festival in 1997. He has made 42 movies, starting in 1950 with “Daddy Amin” and ending with “Chaos” a year before his death in 2008.

Mohsen Mohyeddin, who was one of the key protagonists in several works directed by Chahine, lauded the festival. At a discussion held following the screening of “Iskendria, Leeh?” (“Alexandria, Why?”), he said, "Youssef Chahine is still alive. His works immortalize him. [The films] reflect the problems we still experience.”

After the screening of “Bab al-Hadid,” Shehab said, "I felt as if I am watching the film in its premiere. Screening Chahine's movies on the big screen is totally different than watching them on computers or TV."

"The turnout at Zawya has beaten our expectations," said Zawya Cinema deputy director Ismail Ahmed to Al-Monitor. “The audience has their own special understanding of the works. They come to watch films of high artistic quality and sublime themes, even if they are not produced in the present.”

Ever since it was founded in 2014, Zawya Cinema has been trying to carve a niche by screening independent and experimental films and documentaries.

"To attract good audiences, we should present good content. This is what Zawya Cinema is working toward,” Ahmed added.

Rasha Hosny, a member of the board of directors of the Egyptian Film Critics Association, told Al-Monitor that there are very few movie theaters keen to cater to an audience interested in art films rather than blockbusters. She added, "The audience of Zawya Cinema is different. They are looking for meaningful themes and top-quality cinematography."

Zaywa Cinema has continued to grow since its first showroom housed 170 theater-goers. Since its relocation to Emadeddin Street, the cinema has expanded to include two halls that house 450 people. It has attracted theater-goers interested in European films not seen in other cinemas, and it continues to attract audiences through festivals such as the week-long European Panorama, a showing of five European films that drew about 17,000 people last November.

Zawya's choosing of Emadeddin Street as a venue for its new headquarters is aimed to revive the street's rich artistic heritage. It was once the heart of the cinema industry in Egypt. Ahmed said that many cinemas in the streets have closed their doors, such as Cinema Studio Egypt. Theaters on the same street, like Naguib al-Rihani Theater, also closed because of economic reasons.

"Our coming to the street sends a message that the industry could flourish once again," Ahmed said hopefully.