The Israeli and Palestinian former fighters of Combatants for Peace are using their personal stories to advocate a nonviolent, humanitarian approach to ending the Israeli occupation in the Palestinian territories. 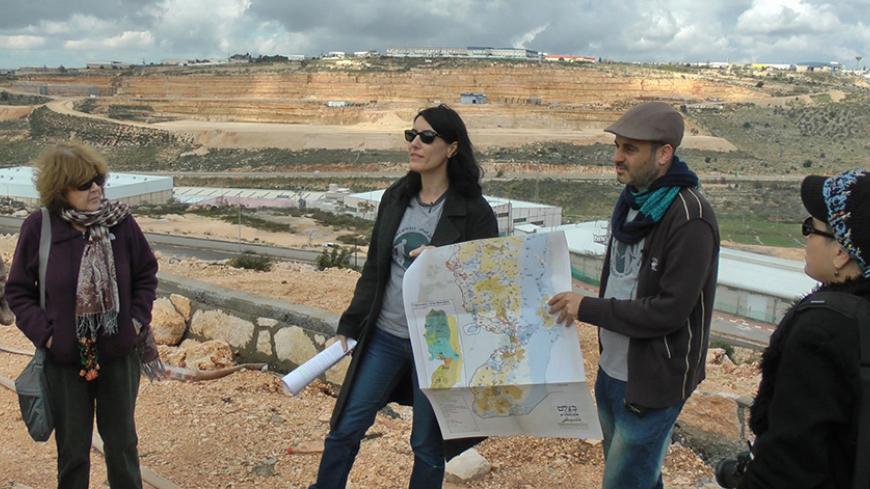 Israeli and Palestinian members of Combatants for Peace, a nonviolent movement opposed to the Israeli occupation, take a tour of the Nablus area, May 2015.

The request for a travel permit seemed terribly innocent. An international filmmaker was debuting a film about Israeli and Palestinian peace activists and wanted the Palestinian activist to be present at the premier in West Jerusalem. But the Israeli authorities denied Shifa al-Qudsi's request.

In an interview with Al-Monitor, Qudsi expressed perplexity, though she wasn’t totally surprised. “I have received permits to visit my brother in jail in Israel, so why do they deny me a chance to attend a peace documentary?” she commented in a phone call with Al-Monitor from her home in Tulkarm.

Stephen Apkon and Andrew Young's “Disturbing the Peace,” about a brave group of Israelis and Palestinians, was screened July 14 at the Jerusalem Cinematheque. The film features four Israelis and four Palestinians, including Qudsi, who are part of Combatants for Peace, a nonviolent organization originally made up exclusively of members who had participated in the conflict as armed combatants on one side or the other.

Udi Gur, an Israeli who did his mandatory military service but refused to carry out his reserve duties in the occupied territories, told Al-Monitor that he joined Combatants for Peace because he wanted to act for change. “Israeli society has to change,” he said. "The left has to find a leader. The Israeli media must stop its constant dehumanization of Palestinians.”

Gur, however, is not confident that Israel will transform anytime soon. He expressed higher expectations from the outside world than from his fellow Israelis. He said, “Strong pressure needs to come from outside. If we are able to continue to participate with Palestinians in a nonviolent movement that resists occupation, we can convince the world that Palestinians have a just cause.”

The objective that Gur and other combatants have agreed to and has defined the movement’s vision by is a total and unambiguous commitment to ending the occupation. “There is no military solution,” Gur added. "No amount of force that one side can use to stop this cycle of violence.”

Riyad al-Halees, from the southern West Bank town of Yatta, calls himself a Palestinian soldier for peace. He told Al-Monitor, “When I heard about Yonatan Shapira and other Israeli pilots' refusal to bomb Palestinians in Gaza, I wanted to meet with him and others to try and build bridges for peace.” In a powerful protest move, 27 Israeli pilots signed a statement in 2003 that they would not participate in the bombing raids against Palestinian civilians in Gaza.

Halees, who was shot during the second intifada in 2001 and left handicapped, said that what makes Combatants for Peace unique is its Israeli and Palestinian wings, both committed to ending the occupation. “Over the years we had a lot of discussions about the situation, but we agree that the occupation is the basis of violence, and we agreed that as soldiers for peace, we wanted to be armed with justice and freedom on the basis of international law.”

The total commitment to nonviolence is what differentiates this one from other Israeli-Palestinian groups. “In the two years I was in hospital being treated, I learned a lot about Ghandi, Martin Luther King and Nelson Mandela. They produced good results,” Halees said.

He added that Israeli and Palestinian members use personal stories to speak out against occupation. “We were Palestinians who were injured during resistance or spent time in Israeli jails and Israeli soldiers who refused to serve in the occupied territories. We created joint groups that were geographically close: Nablus and Tel Aviv, Ramallah and Jerusalem, Hebron and Beer Sheva. We carried out small demonstrations to express our resistance to the occupation.”

Halees is proud of the over 700 people who showed up July 15 for the Freedom March near the Beit Jala-Jerusalem tunnel.

Avner Wishnitzer, an Israeli founding member of Combatants for Peace, echoed Halees’ pride in the success of the group’s activities despite so much opposition on both sides. “Our biggest achievement is the very existence of our community and the fact that we are able to maintain resistance to occupation despite the pressures from both sides together,” he told Al-Monitor.

Sami Awad, the executive director of the Bethlehem-based Holy Land Trust, a Palestinian nongovernmental organization committed to advocating nonviolence, spoke at the rally near Beit Jala. Later in an interview with Al-Monitor, Awad praised Combatants for Peace, describing its members as genuine supporters of peace and saying, "Combatants for Peace is a network of Palestinians and Israelis who are not only engaging in dialogue, but are committed to nonviolent activism to bring the Israeli military occupation to an end. For me, they represent real commitment to achieving peace."

Also attending the rally were two combatants from Northern Ireland who had come to show support for Palestinians and Israelis. Alistair Little and Jerry Foster, a Catholic and a Protestant who fought in Northern Ireland on opposing sides, posted a message on the Combatants for Peace Facebook page, “You are not alone in your struggle. Our journey is to humanize each other and understand each other. You are an inspiration to the international community.”

While Qudsi was unable to watch the documentary she starred in at the Jerusalem Cinematheque, she will have a chance to see its July 21 screening against the Israeli wall built in Beit Jala. Speaking to Al-Monitor, Qudsi repeated what she has been saying ever since her release from a six-year prison term in 2008: that she is committed to peace, and like so many other Palestinians and Israelis, she is sick of bloodshed and violence.

“I am against violence against anyone, whether Israeli or Palestinian. This is not what God wants. We need to do everything we can to save human beings that God has created,” she said.

Halees and Gur said that while they have in the past focused on highly committed members, they now feel that the time has come to expand their activities and increase their numbers so that they can have much more impact in reaching their joint goal of ending the occupation.