The Israeli army disrupted the peaceful protests held by Palestinian and Israeli activists in a village south of Hebron to help the local communities return to their land. 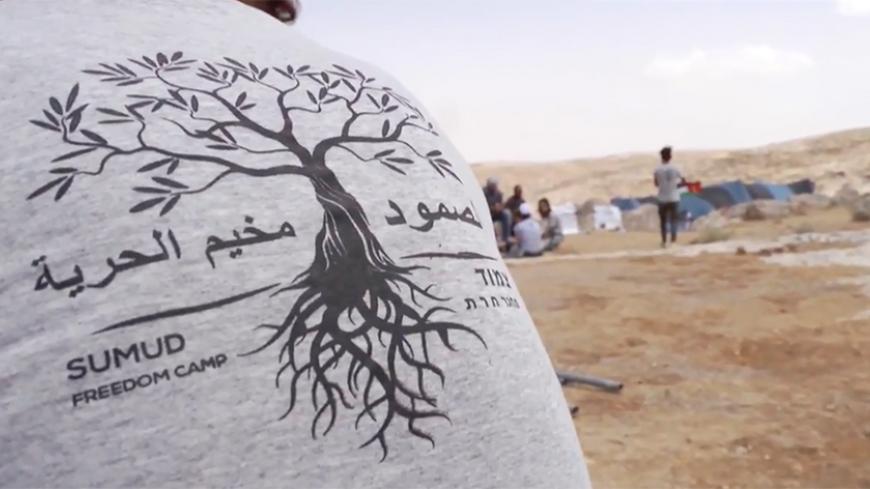 A T-shirt worn by a volunteer for the Sumud Freedom Camp, which is helping rebuild the Palestinian village of Sarura in the West Bank, seen in a video still uploaded May 21, 2017. - YouTube/Mondoweiss

Long before the 1987 Palestinian intifada, the Arabic term "sumud," meaning steadfastness, best reflected the form of resistance undertaken by Palestinians in the occupied territories. The act of sumud was neither violent nor militant. It reflected the hugely important act of staying put on one's land and refusing to budge no matter what.

This is the term that Palestinians, Israelis and diaspora Jews recently applied to their unique act of nonviolent resistance in the largely abandoned village of Sarura, located south of Hebron. On May 18, activists arrived in Sarura to support the villagers who have been harassed and intimidated to leave their homes by Jewish settlers and the Israeli army. Some 300 local Palestinian, Israeli and foreign volunteers set up camp in Sarura and helped the town's villagers to return. They did so by rehabilitating the caves they were living in and preparing wells and other basic infrastructural elements in Sarura.

Sami Awad, director of Holy Land Trust, one of five groups that organized the Sumud Freedom Camp campaign, told Al-Monitor that the idea for the campaign was in the works for over six months. "We wanted to plan an activity that is proactive and not reactive," he said. "We wanted to create an experience that can demonstrate nonviolence without necessarily having to provoke a confrontation. We opted for the term 'sumud' because our goal is to help the people be steadfast on their land."

Awad said he was inspired by the Standing Rock protests and wanted to reproduce these types of activities in Palestine. "We have already spoken to people from various global movements supporting minorities and marginalized communities, and they said they are interested in visiting our Sumud Camp," Awad said.

Although Palestinians and their Israeli and Jewish guests might have tried to avoid confrontation, they failed to prevent the Israeli army from doing so. In a span of 12 days, the Israeli army came to the camp and tried to break it up three times, without making any arrests.

The Israeli army brought bulldozers and demolished all the established structures on May 29. It seized all tents, mattresses and even a car. Ironically, at no time did the army declare the camp a closed military zone.

Southern Hebron is known to be an army shooting range, although no training is taking place there. Because of the settlers' and the Israeli army's opposition, efforts to facilitate the return of local populations who have been pushed off their land have failed — even though there is no legal basis to prevent the local population from returning to their land and to welcome guests as they wish.

Ilana Sumka, the Jewish-American founder of the Center for Jewish Nonviolence, wrote a powerful op-ed on the May 29 incident for the Israeli daily Haaretz. Titled "Punched, Dismantled, Unbowed: How Diaspora Jews Are Unsettling the Occupation," Sumka's strongly-worded article denounced the State of Israel and occupation practices against Palestinians. She wrote, "In our West Bank protest camp, being a Jewish nonviolence activist is no immunity against manhandling by the Israeli soldiers [whom] I grew up in America believing were our superheroes who'd protect me from harm."

Awad believes that the steadfastness of the campers and the Palestinian residents, in spite of the Israeli army's repeated attempts to disperse them, gives hope that a new kind of nonviolent movement will become sustainable — one that involves a wide range of local and international coalitions and volunteers and one that will remain nonviolent even as the other side resorts to violence.

The Sumud Freedom Camp became a huge hit on social media (with #WeAreSumud trending) when Israeli forces manhandled the volunteers and prevented them from supporting local Palestinians.

AJ+ published a video report on May 22 of the protests, while the campers livestreamed videos and posted photos, blogs and stories all week.

The Sumud Freedom Camp's organizers initially struggled to raise funds. But hours after being attacked by the Israeli army and having their camp destroyed, they managed to crowdfund thousands of dollars, according to Awad.

Online crowdfunding also allowed the organizers to set up a database of interested supporters.

Nonviolent protests are not new to Palestine. Israel deported Palestinian nonviolent leader Mubarak Awad in 1988. Yet, after 50 years of occupation, the idea of having Israelis and diaspora Jews supporting Palestinians and coming to spend time and live with them is a new and significant development. Activists in the Hebron, Bethlehem and Ramallah areas often carry out nonviolent activities.

Although sumud might sound like a passive act, anyone following the Sumud Freedom Camp's activities can see it's anything but.

If these efforts prove to be successful, they could very well spell the beginning of a major and strategic change in the relationship between the occupier and the occupied.